When I was a kid I had a thing for reading tales of allegedly true ghost stories. I kept going back to them, even though they terrified the hell out of me. Some of the stories popped up in several of the books I read, such as the Berkeley Square Horror, or the Borley Rectory, but one of my favorite stories appeared in only one book stocked by my local library.

It was the tale of Black Aggie, a statue that would supposedly come to life at night. The story, as I remembered it from the book, was that the statue was angel carved out of black marble and it served as a grave marker. Not long after it was put in place, tales about the statue began to spring up. People claimed that at night it would stroll about the cemetery or that it would blind you if you stared into its eyes at night. Grass wouldn't grow in its shadow.

Eventually the statue caused such a commotion that the family had it removed from the cemetery and donated to the Smithsonian Institution, who then hid it deep in storage, not wanting to take any chances of supernatural phenomena occurring if it were put on display. The book, the name of which I have sadly forgotten, had a single illustration of the statue, showing a black angel with glowing red eyes against a moonlight sky. If anybody knows the book this is from, please let me know, as I would like to credit it.

Unfortunately for years, that was all the information I had on the Black Aggie. It wasn't until the internet started to proliferate that I could find enough information to verify the story. Of course, the internet, being what it is, I found a good amount of versions of the tale that seemed to merge it with other urban legends. A popular one merged it with the story of the college student who took on a dare to spend a night sleeping on the statue's lap, only for him to be found the next morning dead of fright. (I'd usually heard the story told without the statue. The dare was that the student was dared to stick a knife in a grave plot. Something holds him to the plot and won't let go, and he dies of fright convinced that the dead body below was grabbing his foot, when in reality he'd stuck the knife through his pant leg.)

Eventually, through sites such as this, or this, I found more information that filled in some of the gaps of the half remembered story, and suggested there was some truth to it after all. For one thing, it turns out the statue was actually an unauthorized copy of another statue known as the Adams Memorial, (sometimes referred to simply as "Grief") The Adams Memorial was made in 1891 by Augustus Saint-Gaudens, and commissioned by Henry Adams for his wife marion who had committed suicide. The original still resides in Rock Creek Cemetery in Washington D.C. 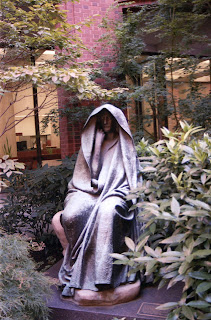 The unauthorized copy was made by Edward L.A. Pausch and purchased by General Felix Agnus for his family plot in Druid Ridge Cemetery, in Baltimore, Maryland. It was this statue that became known as Black Aggie, although according to Wikipedia, the legend sometimes was mistakenly attributed to another statue in Druid Ridge Cemetery that represented the greek fate Clotho. They are similar in appearance, and the Clotho statute is actually of an angel, which may account for Black Aggie being described as one in some versions of the story, such as the book I previously mentioned. However, as the Wikipedia article states, it isn't likely to be the statue of the legend because among other things, there's no reason for it to be named "Aggie."

The one fact I was glad to find on doing my research as an adult was that the part about the Smithsonian losing the Agnus Memorial in storage was false. In fact, the statue is currently on display in the rear courtyard of the Dolley Madison House on Lafayette Square in Washington, D.C. In 2008, I was passing through D.C. and decided to see the statue for myself. 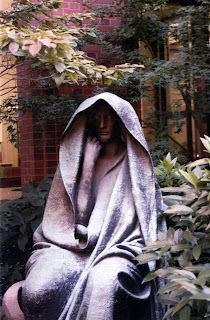 Standing in front of the Dolley Madison House, at first glance it appeared that the courtyard was inaccessible from the street, due to the way the house was adjoined to the nearby buildings. However, it turned out the courtyard was rather easy to reach from the street. Starting in front of the house, just take a right on H Street, and then turn right under the first archway in the red brick building right next to it. If you're not looking carefully, it may just look like an alleyway or an entrance to the brick building but it leads right behind the Dolley Madison House.

The Black Aggie, in it's current setting looked more serene than terrifying. When I saw it in the courtyard, it was in the shade, nestled between several bushes (none of which appeared to have any difficulty growing around it.) I suppose at night it may have been a bit unnerving to walk past, but in the daylight, the statue, and the courtyard it sat in, looked like a nice quiet place to visit to ease a bit of midday stress.

When I went home that night, I did a bit more research on Black Aggie and the Adams Memorial that it was based off of. I thought about seeing the original Adams Memorial, but passed on that idea upon learning it was all the way in Baltimore. However, it turned out that there was a second, authorized replica of the Adams Memorial on display in the national gallery. 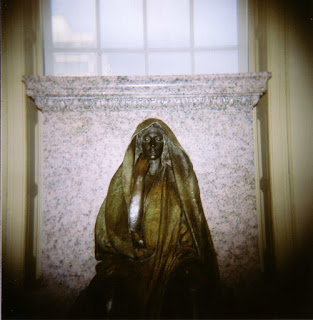 It seemed I wasn't the only person who was interested in the statue because when I asked the guard where the Adams Memorial was, he told me that I was the fifth person to ask about the statue that week and he wanted to know if it was mentioned in a book or something. I didn't really care to get into the backstory about Adams and Agnus Memorials, so I just told him I thought it was an interesting statue and moved on.

Oddly enough, the Adams Memorial, the one that didn't have any ghost stories about it, seemed creepy to stand in front of. It sat alone at the end of a hallway. I took a picture of it with my Holga camera, which seemed to exacerbate the creepiness factor of it when I got the photo developed, especially since the way the camera flash hit the eyes, it made them seem to glow a bit. Had I seen the real Black Aggie when I was kid, I would have simply thought it was cool statue, but had I seen the Adams Memorial, it would have certainly haunted my nightmares.

Update:
So I found an illustration from the ghost story book I mentioned, unfortunately the site didn't have any information about the book itself. If anybody recognizes the book from this illustration, I'd greatly appreciate it, as I'd like to credit that book for introducing me to this tale. 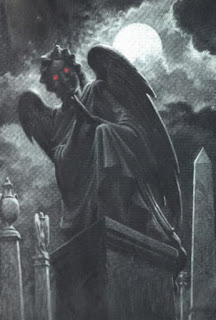 Posted by Allister Sears at 9:16 AM