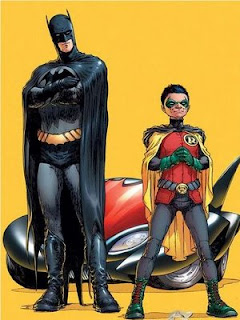 That, or as a title, "Batman and Robin" never bodes well for the franchise.

I've pretty much been a huge Batman devotee for as long as I can remember. I've witnessed the many different interpretations of the Caped Crusader, and in the ten years I've actually been reading the comic itself, I've been able to identify when the writing has been exceptionally good as opposed to when its just getting by.

I can also put my foot down and say when the writing has just plain gotten bad. As acclaimed a writer Grant Morrison is, his work on Batman has definitely been one of the series low points. When it was first announced he'd be writing for the series, there was much acclaim and hooplah behind it, as he was expected to do drastic and daring things with the series. Unfortunately, I think he kind of went overboard in an attempt to be outlandish.
I'll forgive some of his more controversial decisions, such as making Batman's son a canonical character (He'd only previously been mentioned in the comic Batman: Son of the Demon, and was never heard from since.) But for the most part his run on Batman was strange and usually hard to follow.
He started off with a tale about impostor Batmen running around town, one of whom shoots the Joker. This was followed by the aforementioned "Batman & Son" storyline (yes, thats what he chose to call it) promising that when Joker did return it would be something radical.
And here's where it started to get weird... I mean really weird. First, when he did bring back the Joker, it was in the form of a prose issue. Lots of text, few pictures and poor typography made it hard to read. And, it wasn't even anything exciting. Just the Joker musing on his many different incarnations. Then there was the Batmen of All Nations storyline, where vigilantes across the world, inspired by Batman all meet on an island only to get taken out one by one, Agatha Christie style. Behind it all was a mysterious group known as the Black Glove, intent on taking out Batman. It sounds simple, except the man behind the group is supposedly Thomas Wayne, you know, the guy whose death drove Bruce Wayne to become Batman.
All of this was meant to lead up to Morrison's coup de grace, Batman R.I.P., which was slated to be THE definitive Batman story of the decade. Instead it was among the worst.
I read every damn issue of Batman R.I.P. and I still have no idea what went on. First, he introduces a character named Jezebel Jet, who exists only for Batman to fall in love with her, reveal his identity and consider giving up crime fighting. If she wasn't introduced for this storyline, she sure as hell was an obscure character, making her an odd choice for Batman to reveal his identity to out of all the women he's been involved with.
But what really irked me was that none of the issues seemed to flow into each other. I felt as if I'd been missing issues, since the story jumped from point to point so much. Hell, halfway through most of the issues it seemed like one random thing was happening after another.
Then there's the fact that despite the name, Morrison never actually killed Batman in the R.I.P. storyline. It looked like initially he chose to have Batman die in a helicopter crash, only for him to turn up hooked up to some sort of virtual reality machine or something. I'm not sure Morrison ever really explained how he got there or how he got out, but at any rate the real death of Batman didn't even happen in a Batman title.
He saved that for the equally convoluted Final Crisis, which had absolutely nothing to do with the events of R.I.P.. (He dies from Darkseid's eye lasers. What he was doing fighting Darkseid, I don't know, because that all involved stuff from Final Crisis.)
That being said, I decided to give him another shot with his new series Batman & Robin. I honestly don't see myself picking this up past the first issue. To start with, it looks like it's going to spiral out of control pretty quickly. I didn't really warm up to the idea of a flying Batmobile or having Bruce Wayne's son Damien take on the role of Robin. The last time such an obnoxious character was picked to be Robin, fans called in and voted to have him killed off. Violently.
Considering that the teaser page at the back of the issue promises more of the strangeness that plagued R.I.P. such as multiple Batmen, and the characther claiming to be Thomas Wayne, I'm going to hold off on it. And better yet, I won't be without my Batman fix either.

Paul Dini is going to be writing two Batman titles: a solo book and one devoted to the women of Gotham. Dini deserves alot more acknolwedgement than he's been given for his work on Batman. While Morrison was making the franchise wierd and unapproachable, Dini kept things pretty level. At the same time Morrison was working on the main Batman title, Dini was at work on Detective Comics. For most of his run, he stuck with one shot issues that were loosley tied together. He also opted to do his own thing, independent of Morrison.
For example, when Morrison was trying to build up excitement about what he would do with the Joker after writing him getting shot in the face, Dini wrote a one shot story about the Joker kidnapping Robin that didn't even acknowledge anything Morrison had written.
And when Morrison was writing Batman as losing his mind, Dini paid this lip service and wrote a straightforward Batman story. In fact, Dini's contribution to the RIP storyline was better than Morrison's, as Dini chose to write a sequel to Jeph Loeb's acclaimed storyline "Hush" where Hush tries to get his revenge on Batman by literally stealing Catwoman's heart. It was engaging, easy to follow, and showed that good writing capable of drawing new readers in doesn't have to be in the form of massive event stories.
Here's hoping that Morrison's run on Batman ends soon. Now that the death of Bruce Wayne is out of the way, I won't feel as obligated to read his work to know what's going on in the Batman universe, and at least I'll have Dini's work to keep me going until (inevitably) some writer brings back Bruce Wayne. Hopefully it won't be Morrison.
Posted by Allister Sears at 12:14 PM