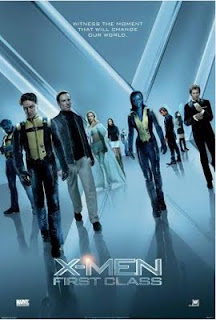 The X-Men movies are good again. Thank God. When the overkill that was X-Men: The Last Stand was followed by lackluster X-Men Origins: Wolverine, the X-Men franchise felt doomed. It seemed that we would have to wait years before the franchise was rebooted.

Thankfully, we only had to wait two years. Not only does X-Men: First Class fix the problems of the last two X-Men movies, it even manages to outshine X2. It's not clear if First Class is meant to be a reboot or just a retcon of the other films (there's more than a few notable changes to the backstory), but either way, it's a welcome direction for the film franchise.

First Class is about the origin of the X-Men team, and how Professor X and Magneto first meet. The story is set in the 60's against the backdrop of the Cuban Missile Crisis, so it should come as no surprise that this film takes itself a bit more seriously at times than the others in the series, especially since this film heavily focuses on the fact that Magneto is a Holocaust survivor. That's not to say that this is a meaner grittier take on X-Men. The grimness of Magneto's story is balanced out by the playfulness of the young recruits to the X-Men who both possess extraordinary powers, and no idea how to properly control them.

While it is a prequel, to the X-Men series, it avoids the pitfall the original X-Men movie fell into of feeling like little more than a prologue to a sequel story. First Class stands on it's own feet with a self contained story that doesn't rely on the audience being familiar with the previous movies, or the characters. The producers also took the bold step of framing it less in the context of a hero story, and more like an espionage thriller with a sci-fi twist.

I was impressed by how well the film developed the film's three main characters, Professor X, Magneto and especially the shape-shifting Mystique. In the other movies, Mystique was heavily featured but her character was never really explored past her being a mutant who hated humans. Here, we get to see her struggle with being comfortable with her naturally deformed appearance, and how it leads her to adopt the mindset of a villain. There's a particularly good scene in which she asks Professor X what he thinks of her as she really is, and the Professor does a poor job of trying to hide his prejudices.

Speaking of villains, Kevin Bacon and January Jones are both fantastic as First Class's villains, Sebastian Shaw and Emma Frost. The first time you see Bacon onscreen is as a Nazi scientist tormenting a young Magneto, and reveling in it. Bacon doesn't just let his portrayal rest on Nazi = Evil.  Instead, his character evolves into somebody much deeper that puts the X-Men and even world governments into a moral bind.  I had some concerns about January Jones because there have been times that I've seen her in Mad Men and other movies where her acting seemed a bit flat. In theory that shouldn't matter since the character, Emma Frost is supposed to be arrogant and indifferent, but Jones does make her character feel rather animated while staying true to her character's nature.

Overall, First Class feels far more balanced than the other X-Men movies, which often tried to cram fan-favorite characters into cameo roles at the expense of sensible plot development. First Class does boast a large roster of mutants, but the filmmakers decided to round out the supporting cast with lesser known (and more expendable) characters like Havoc and Azazel. Unless you're a comics purist who'd be put off by the filmmakers mucking about with the characters' ages (in the comics, most of the characters in the movie are young when Professor X and Magneto are old) you should love X-Men First Class.
Posted by Allister Sears at 1:02 AM