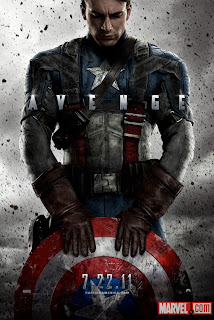 The mark of a good comic book movie is one that can remain faithful to it's source material while being equally as enjoyable to fanboys as it is to people who have no intention of ever picking up a comic book in their life. It was true for Christopher Nolan's Batman movies. It's been true for the Iron Man movies as well as Thor, and it's definitely true for Captain America.

Just as Thor was presented less as a super-hero movie and more as a fantasy/action movie, Captain America is treated more like a mash-up of a World War II movie and a sci-fi adventure. The film follows Steve Rogers (played by Chris Evans) as he goes from being a scrawny kid unfit for basic training in the Army to a true soldier going deep into enemy territory. In fact, one of this film's more impressive accomplishments is the way they work up to Captain America even being a costumed hero in the first place. The idea of a soldier charging behind enemy lines in full All-American regalia is realistically a bit absurd, but the film leads up to it in such a manner that it ends up working pretty well in the story, taking a few jabs at Captain America's roots as a piece of WWII propaganda, along the way.

Although the film is Captain America's origin story, it stands strong enough on it's own two feet. Even though by now everybody is well aware that this movie is among many that's a lead up to next summer's Avengers movie, this would be worth seeing even if it were stripped of all of it's Marvel Comics licensed characters. At heart, it's a tale of American soldiers going against a fringe science division of Nazis trying to use an ancient power source to power futuristic weaponry. It doesn't rely on you knowing anything about the characters going into the movie.

That being said, the producers made a point of taking advantage of the fact that The Avengers movie isn't just an idea being kicked around, but is fully into production. Instead of the quick references to other Marvel movies that were thrown about in The Incredible Hulk and Iron Man 2, the wider Marvel universe plays a more prominent role in the plot. It doesn't rely on you having seen the other movies, but it builds upon the foundation laid before it. For example, there's an early scene that takes place at a 1940's version of the Stark Expo that was central to Iron Man 2.

Chris Evans is probably the perfect choice to play Captain America. Having already appeared in numerous other superhero/comic movies such as Scott Pilgrim vs. the World, Push, and the Fantastic Four movies, it's about time he got the lead role in a major summer blockbuster. It's easy to be convinced that he's an honest kid who wants to do whatever it takes to serve his country. I was actually a bit worried about how good a job they would do with using special effects to make Evans look tiny as Steve Rogers before he is transformed into the super soldier, but for the most part they do a good job. Yes, there are moments when they get the proportions a bit wrong, but for the effect is mostly convincing enough that you forget Evans isn't actually a 90 pound weakling. Evans actually does such a good job at playing up the more humble aspects of Steve Rogers that after he transforms from scrawny kid to super soldier, it might take you a moment to remember that they used special effects to make Chris Evans look like a little guy, not the other way around. Even after he becomes the super soldier you still feel like he's the innocent kid from the start of the movie, just in a bigger body.

The rest of the cast is pretty top notch as well. There's a lot of well known faces such as Hugo Weaving, Stanley Tucci and a character played by Tommy Lee Jones who you almost want to see in his own WWII movie. There's also Toby Jones, who you might not recognize by name but have probably seen him in The Mist, Doctor Who or a bunch of other places you won't be able to figure out off the top of your head, and former Band of Brothers cast member Neal McDonough.

I'm not going to go as far as to say that if you only see one movie this summer, this should be it, but if you have found yourself highly selective of what's worth seeing in cinemas this summer, Captain America is well worth the money to see it on the big screen.
Posted by Allister Sears at 5:47 PM