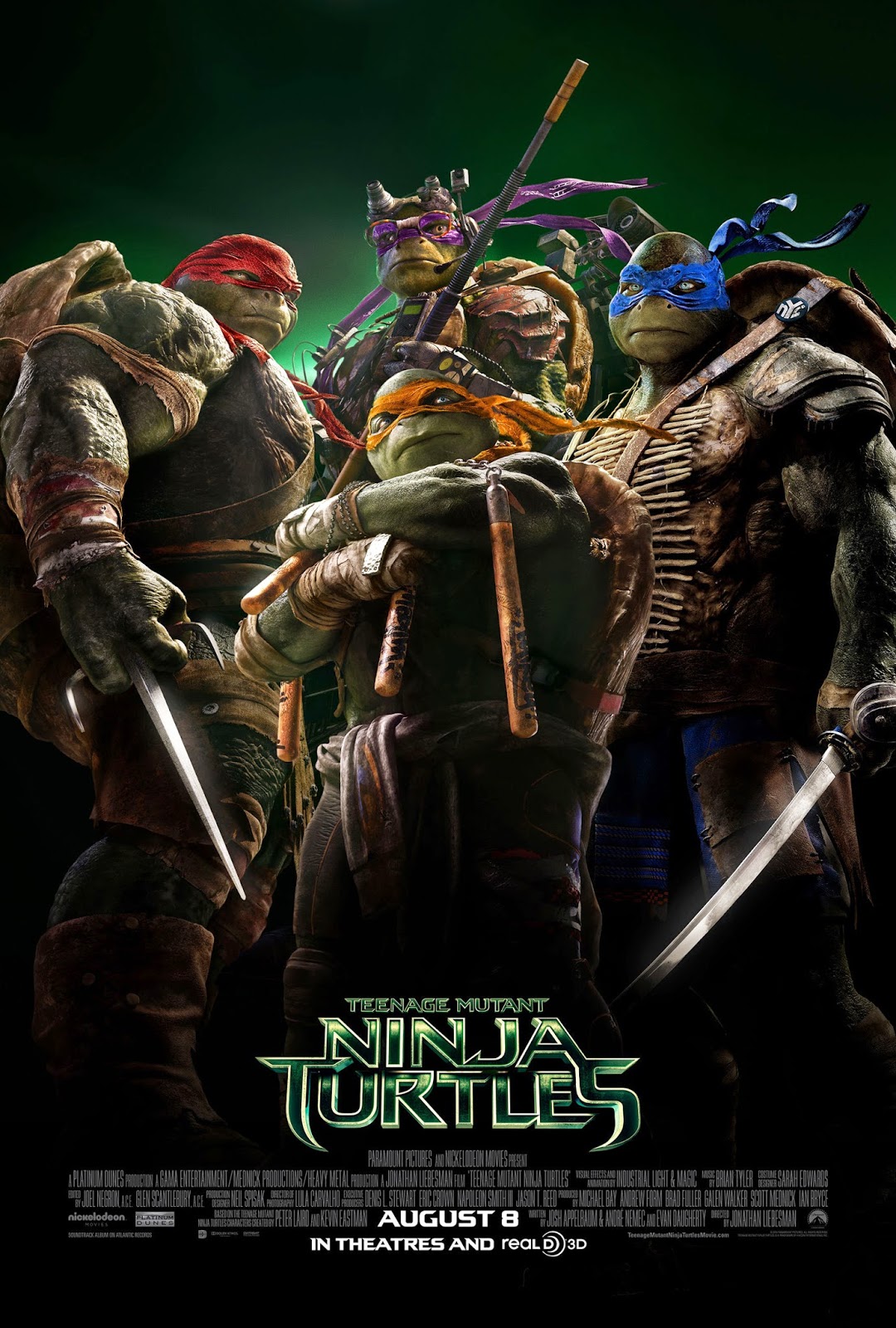 The 2014 incarnation of Teenage Mutant Ninja Turtles was an acceptable movie. It wasn't a completely abomination. In fact, it was perfectly watchable. I'm not saying it's great, just better than you might expect.

It is by no means anywhere near as good of a movie as it should have been. By now, those of us who grew up watching the original Teenage Mutant Ninja Turtle cartoons and movies are now old enough to be the ones making the movies. Theoretically, in this age when comic book movies are at an all time high, a TMNT movie that comes out now should be the best damn Ninja Turtles movie ever, fulfilling some filmmaker's dream of making the TMNT movie he or she dreamt of making as a child.

Sadly, this is not the case. The 2014 movie feels like it's more the end result of a series of business decisions. Nickelodeon bought the rights to the TMNT franchise, and figured they might as well make a live action movie in addition to the current version of the cartoon show. Knowing that people would see it regardless of quality, they put just enough effort into making the film so that it would make enough money to warrant a sequel, but pretty much stopped there. For comparison's sake, it's not even on the level of something like Transformers, (which I admit liked.) It is, however, better than Transformers: Rise of the Fallen (which I hated.)

It's at least a better movie than Ninja Turtle fans feared it was going to be. Early in the film's development it was leaked that the 2014 film would change the turtles' origins so that they're aliens, not mutants. When filmmakers are actively considering making versions of characters that flagrantly fly in the face of what the fans want, expectations should be rightfully lowered.

Fortunately, the filmmakers changed their mind and went with versions of the Turtles closer to fan expectations. While this version doesn't stick to the origin story most of us grew up knowing, (which in reality was just a spoof off of Daredevil's origin story anyway,) it does at least adopt the version of the origin story from the current IDW comic series being co-written by TMNT co-coreator Kevin Eastman, (which is actually quite good, by the way.) In other words, they stuck reasonably close to the source.

However, the actual execution of their origin story, and the rest of the character development, falls flat. The film assumes you're already familiar with the characters through some other movie or TV show, so it does little to establish the turtles' personalities aside from some overhanded character design. For example, we only know that Donatello's the brainy one because he's got glasses and is covered in hi-tech goggles and Go-Pro cameras. He's nerdy. We get it.

The villains are equally flat. The Foot Clan are neither ninjas, nor robots, but just a squad of criminals terrorizing the city for no apparent reason. Shredder is present in the film, as is his adopted daughter Karai, but they do surprisingly little. Karai just gives out orders, and Shredder just fights. The only villain to get anything close to a story arc is a scientist named Eric Sachs, played by William Fitchner, a guy you recognize as a supporting actor in several movies you've seen, even if you can't remember specifically which ones.

Now, if you're wondering just how much character development one should even expect out of a Ninja Turtles movie, just look at the 1990 movie or the 2007 animated film, simply titled TMNT. Both of these films start out with the assumption that the viewer is coming in cold, with no idea who any of the characters are, and fleshes them out fully. The 2014 movie, feels like it assumes you've already seen those other movies.

Since I'm still focused on the negatives, I might as well talk about the character designs themselves. If you've seen the trailers, you're well aware that the designs of the turtles are pretty awful. They look less like giant turtles, and more like green skinned man-babies. However, they are not the worst offenders. Splinter, for some reason, is given a bald face, and as a result looks like one of the pinheads from the movie Freaks. Shredder's design is over the top in a way that can only be described as "Michael Bay." While Bay only produced, and didn't direct the film, it's moments like this where his over the top influence is felt. Instead of making Shredder's costume look like a samurai outfit covered in an excess of sharp edges, it's a mechanized suit that fires out a never ending supply of blades, and looks like a set of over-sized Swiss army knives strapped onto an off-brand Iron Man.

At least the film didn't do the one thing I was worried it was going to do, and that is "whitewash" the character of Shredder. Early trailers made it look like William Fitchner would be playing Shredder, a character that's supposed to be Japanese. Rest assured that the character is played by Tohoru Masamune, an actor of Japanese descent. Likewise, the film has Baxter Stockman played by K. Todd Freeman, a black actor. I don't even know if Stockman has a single line of dialogue in the movie, but at least he's depicted as an African American, as he's appeared in every version of the character except the 1987 cartoon, which had him as white.

Teenage Mutant Ninja Turtles is at least entertaining, even if it does manage to be underwhelming. It doesn't feel as much like a movie as it does like a really big budget TV pilot for a live-action Ninja Turtles series. If this were on TV, it would definitely get me hooked as a series, assuming more of the backstory and characters would be fleshed out in future episodes. As a movie, I wished they hadn't operated on the assumption that they could leave all of that for the sequels. Still, the action's alright. The jokes aren't bad. Megan Fox seemed to return to the level of acting she displayed in the first Transformers movie, (which I know wasn't great, but she definitely got worse after that movie.)

Definitely do not see it in 3D. I saw it in 3D partially because after seeing Guardians of the Galaxy in 3D I thought that maybe studios had nailed the art of making a film post-converted into 3D look as good as one shot natively. That, and my friends picked the showtime. While Guardians felt like a film that was shot with 3D effects in mind, Ninja Turtles was definitely not. If director Jonathan Liebesman was shooting it with 3D in mind, he certainly didn't know what he was doing. There are far too many quick visual cuts and shaky camera work for it to be comfortable to watch. Even in scenes where the camera is steady, it's clear that the conversion work is poorly done. For example, one scene that takes place in the rain looks like you're watching it through a shower curtain when the 3D effect is added.

If you're a fan of the Teenage Mutant Ninja Turtles, you'll probably enjoy the movie well enough. If the characters are completely new to you, the film isn't likely to make a fan out of you, but you still might enjoy it as a "put your brain in neutral" kind of movie. Either way, you might want to wait until it comes out on video. I'm sure it's a much more enjoyable film if you pay $1 to see it, versus $10, but if you've already seen Guardians of the Galaxy twice, and you want something fun and brainless to watch in cinemas, sure go head and see it on the big screen.
Posted by Allister Sears at 9:17 PM