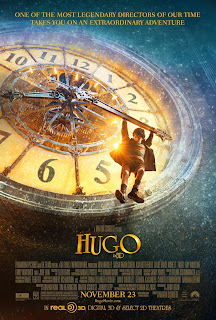 Martin Scorcese certainly created an oddity with his film Hugo. It's based on a children's book, has a plot that centers around children, is one of his few PG rated movies, and at the end of the day it's a decent movie.

Except that I can't imagine it much any appeal for children.

The studio tried to market this as a magical adventure story, but it's really more of a story about lost souls. There's the titular character, Hugo, an orphan that lives in a Paris train station. He keeps all of the clocks in the station running, while at the same time works on repairing a mysterious automaton discovered by his deceased father. Hugo is constantly evading the station inspector (Sacha Baron Cohen), a man with no other apparent purpose in life than to send loitering children off to the orphanage. Then there's Georges (Sir Ben Kingsley), a toy shop owner who comes off as uncommonly cruel after he catches Hugo trying to steal a wind-up mouse from his shop. However, when Georges's goddaughter, Isabelle, befriends Hugo, she and Hugo find that their quest to learn more about the automaton leads them to learn about Georges's past.

Now one would think that a story involving a mysterious mechanical man would be engaging from start to finish, but the parts of the film that focus on uncovering the mystery of the automaton are actually the weakest. It's as if Scorcese had an idea of what people expected in a film where children with British accents have a wild, fantastic adventure, and tried to dress up parts of Hugo to meet that expectation. Unfortunately the automaton plot just isn't as wild and fantastic as the story treats it as being, and so the characters seem to strain themselves to make the story more perilous and complicated than it needs to be.

Fortunately, the automaton isn't what the whole movie is about. Without revealing too much of the story, the mechanical man leads Hugo and Isabelle into a far more interesting story about the early days of filmmaking. It's here that I found the characters really began to develop, and where I finally found myself growing emotionally attached to them. You can just feel Scorcese's own love for filmmaking bursting through the characters as the relive the excitement of being the pioneers of the motion picture industry. It's also this part of the story that I imagine many younger viewers would lose interest, unless they happen to be aspiring entertainers themselves. It has a very mature feel to it. Not mature in the sex and violence sense, but in the sense that it deals with the very grown up aspects of success and loss.

It's not Scorcese's best work, but it's still a well crafted movie. It doesn't exactly feel like a Scorcese movie though. I've always found his movies to have a very raw, unpolished feel to them, almost as he didn't edit the footage as thoroughly as others wood, so as to capture the immediacy of the performances. Hugo, is mostly the opposite. It's slick and clean. In some instances, it's too over-processed actually. A few years back, a blogger pointed out how filmmakers have gone overboard with digital color correction, heavily playing up the colors orange and teal. Hugo may be one of the worst examples I've seen yet, with scenes where it looks like everybody is covered in spray tan and dressed in the same bright, brilliant shade of blue. Who new early 20th century Paris was the Jersey Shore of its day?

Overall, if you do end up checking Hugo out, go in knowing that it's not the magic-filled adventure story they've tried to market this movie as, but it's still a worthwhile movie.
Posted by Allister Sears at 4:33 PM