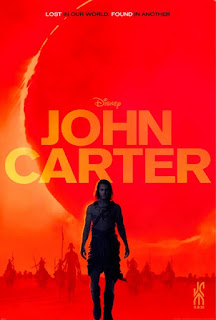 I don't know how they managed to do it, but somehow the marketing powerhouse that is Disney managed to drop the ball on promoting it's sci-fi epic, John Carter. It has all the elements of a winning movie. It's directed by Andrew Stanton, the man behind Wall-E, Finding Nemo and A Bug's Life. The script was co-written by Pulitzer Prize winner Michael Chabon. Most of all, it's based on Tarzan author Edgar Rice Burroughs's classic sci-fi/pulp series, which laid the foundation for many modern sci-fi blockbusters such as Star Wars and Avatar.

However, it's far more violent than Stanton's Pixar movies, so Disney probably didn't want to associate the two, but in an attempt to appeal to as wide an audience as possible, Disney severely downplayed the pulp elements of John Carter. The ads seem to avoid any mention that the movie is largely set on Mars, and in fact they chose to abandon the film's original title, John Carter of Mars, or to use the source novel's puplier sounding title, A Princess of Mars. I can't imagine why they chose to do this. Audiences seemed to have no trouble accepting the absurd premise of a movie like The Day After Tomorrow, so it's not like they'd have any trouble accepting a movie about an Earth man on Mars. Alas, the marketing campaign only really shows John Carter bouncing around a desert, battling monsters and flying alien spacecraft, ultimately giving it the appearance of another generic sci-fi flick. It's not.

With John Carter, Disney has been maintaining its streak of mature, but family friendly action movies, such as Pirates of the Carribean and Tron Legacy. The titular John Carter is a veteran of the American Civil War who finds himself transported to Mars. He finds himself to be stronger than he was on Earth and able to leap impossible distances. He is taken in by a race of tall, six-armed, green beings known as Tharks. While in their custody, he discovers that Mars, known by the natives as Barsoom, is also home to a humanoid race that is engaged in its own civil war, one that is being manipulated by the same god-like beings that brought him to Mars in the first place.

There's plenty of great characters in John Carter, brought to life by a well chosen cast. Willem Dafoe and Samantha Morton lend their voices for the Tharks. Mark Strong plays one of the god-beings. He may be typecast as a villain, but he does play the role well. Lynn Collins does a great job as the Martian princess, especially since she manages to portray her character as a warrior, without coming off as overtly butch, and as a damsel in distress without looking completely helpless. I'm on the fence about Taylor Kitsch as John Carter. For the most part, he does alright with the role, but there are moments where he comes off as a poor man's Timothy Olyphant, or seems to be trying channel Wolverine. Fortunately, his weaker moments are balanced out by a scene-stealing alien dog creature thing.

Even though John Carter is based on one of the oldest sci-fi tales out there, and bits and pieces of the original story have been plundered and used in other movies you've probably already seen, it still feels fresh and new in this movie. Part of of that may be because of the balance the filmakers managed to find between playing the story seriously while at the same time keeping in line with the tale's pulp fiction roots.   The filmmakers have crafted a reasonably complex mythology that's very character driven, but doesn't dwell on how complex its mythology is or let it all be an excuse for a series of big explosive action sequences. This is more than can be said of many other sci-fi epics of recent memory. (Ahem, Star Wars prequels. I'm looking in your direction).

Like I said, John Carter doesn't entirely shed its pulp origins. They kept the names from the original story, which was written in the 1900s, so it does take a bit of getting used to hearing characters use words like Thark and Barsoom, and having them not sound like joke names. Just remember, there was a point where a movie with names like Darth Vader, Chewbacca and Skywalker sounded ridiculous too. Then of course there are moments where we see John Carter pull off absurd feats, such as taking on an entire army by himself, but they're done with just the right amount of restraint. The Martian princess also finds herself forced to marry an evil warlord, but at least it's framed as a strategic move on her behalf to end the civil war, and not because she is in some way too weak to stand up for herself.

Overall, John Carter isn't anything terribly groundbreaking, but it's the sort of fun action epic that's the reason why you go see movies in theatres in the first place. It's got all the action and spectacle of a summer action movie with the romance and subtle storytelling of a Pixar movie. If anything else, just go see this movie so that we don't live in a country where a well crafted story like this keeps losing at the box office to a Dr. Seuss adaptation that completely misses the point of the work it was based on.
Posted by Allister Sears at 10:56 AM