The Total Recall remake is how I know I've gotten old. 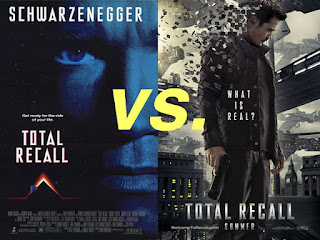 I'd seen it happen to others before. Word gets around that some older movie is being remade and people get up in arms. Why? Because it's not just any older movie. It's a classic from their childhood. There was a hubbub over the Planet of the Apes remake, and the fact that somebody decided they needed to do a different take on Nightmare on Elm Street. For most of these movies I observed the remake from an academic point of view, seeing what was kept and what was left out, and seeing if fans accepted the new version. I was aware of the originals, but I wasn't fanatical about them. However, with all of those movies, they were either before my time, or I just didn't grow up watching them. That is, until now, because they're remaking Total Recall.

Just a heads up, SPOILERS from here on out. Then again, in all fairness, you had 20 years to see the original version if you haven't already.

There's something oddly significant about a favorite movie from your childhood being remade. For that to happen, usually some Hollywood executive has to decide that enough time has passed that what's old will feel new again, (the upcoming Amazing Spider-Man being an exception to this). Hollywood is essentially spending a ton of money to let you know that something you grew up enjoying is officially retro. It's not just a cultural reference, it's a 90's cultural reference. It's a landmark along the lines of when the first of your friends gets married or has a kid. When they start remaking movies you remember seeing when they first came out, it definitely means you're an adult.

I have vivid memories about the first time I saw Total Recall. Back in the 90's, long before our current era of on demand programming, movies airing on network television were treated like major events. Every time it came on TV, my family and I sat down to watch it. However, it always aired on a school night, so I only was allowed to watch the first hour or so. It was right about when Quaid made it to Mars that I'd be sent to bed.

Now if you've seen the original, you know there are a ton of questions raised during that first half of Total  Recall that needed to be answered, and quite frankly my parents' summary of the rest of the movie didn't quite cut it for me. Add that to the fact that every time it was on TV, all the kids at school would talk about how awesome a movie it was, I had to see the rest of it. Eventually I convinced my parents to rent it so I could watch the whole thing.

And as you well know, it was absolutely awesome. Even in the second half, the plot twists kept coming. There were all those 90's action one liners that they just don't write any more. There was a rudimentary lesson on the dangers of explosive decompression. And then of course, there was Mary. (Just because her most distinguishing feature was having three breasts, it doesn't mean she didn't have a name.) I think it was one of the first non-Disney movie I convinced my parents to buy for me. In short, I'm a die hard fan of the original.

Now for many people who are die hard fans of a movie, that movie is a sacred cow. Under no circumstances should it ever be remade. For some movies, this is certainly true. Just mention your plans to remake Citizen Kane, 2001: A Space Odyssey or Indiana Jones ant the Last Crusade and you can hear the internet laughing at you. For years I would have probably put Total Recall on this list, but now that it's 20 years old, unlike the other movies I mentioned in this paragraph, Total Recall is starting to look a bit dated.

It's not so much the special effects that look dated, and the clothes and hairstyles everybody wears are all back in fashion again. What does feel dated is director Paul Verhoven's propensity for overkill-violence. The original Total Recall was a very intelligent thriller, but it's easy to overlook that fact when it's drowning in buckets of blood. Every other scene includes head shots, human shields and big ol' Arnold Schwarzenegger spraying about with machine guns. If you grew up watching movies like that, you'll still enjoy them, but these days that kind of over-the-top violence feels more cartoonish than it feels like a hardcore action flick.

Then there's the casting of Schwarzenegger as Douglas Quaid. These days audiences prefer their action heroes as the everyman instead of the musclebound action guy. Modern action heroes are guys like Will Smith, Matt Damon and Daniel Craig. They can act, and they look like average Joes with above-average physical fitness. Schwarzenegger is such a hyper-masculine caricature of a human being that it's hard to realistically picture a guy who looks like that as being anything but Hercules or a personal trainer. Seriously, Navy SEALS aren't even that bulked up. Now, I still a enjoy a good Schwarzenegger or Stallone flick as much as the next guy, and we all mainly saw those movies because of who was in the lead, but I think future generations are going to find them to be more hilarious than badass.


Total Recall is a great movie, but it's not exactly timeless. I never watched it and thought, "Man this looks so dated. Somebody needs to remake this," but I'm not going to object to it now that they have.

With the trailer for the new version of Total Recall finally being released, I think it's a fair time to start voicing my opinions on what I think about the remake, (as opposed to before, when the internet was about with people shouting, "They're remaking Total Recall? How dare they?" without any idea how it would look.)

I'll definitely see it in theatres. I'm intrigued by how it looks like the remake is really going to bring to the forefront the issue of whether everything is real, or if it's all part of Quaid's memory implant. This was sort of a plot element in the original, but aside from the scene on Mars where the spokesman from Rekall tells Quaid that he's just dreaming, it isn't really dealt with. Instead, it's more or less treated as fact that when Quaid went to Rekall, that it awakened buried memories. (Unless, you're director Paul Verhoven, who claims that the entire movie after Quaid's trip to Rekall is part of his fantasy, but I don't think the movie supports that.)

In terms of casting, I have no objections to Colin Farell taking over as Quaid. This is going to sound like blasphemy, but I also don't have objections to abandoning the Mars setting either. There's no point in doing a remake if you aren't going to do a few things differently, and when you think about it, it's not that essential to the story that the rebellion Quaid gets involved with be a rebellion set on Mars. For the record, the Phillip K. Dick story this was based on, "We Can Remember it For You, Wholesale," doesn't even take place on Mars. Actually it's more of a comedy story about a man who keeps going to Rekall to get artificial memories implanted only to discover they keep implanting him with memories he already had but were wiped from his mind.

I'm not completely behind this new version. It's being directed by Len Wiseman, director of two Underworld movies as well as Live Free or Die Hard. That's not exactly the best of track records. I mean it's as bad a track record as Paul W.S. Anderson, but it's still a bit questionable.  The screenwriters inspire a little more faith in me, as they worked on movies such as Zodiac, The Rundown and The Thomas Crown Affair. Here's hoping they bring their A-game.

So this is going to be the first time I'm going to go into the theatre, emotionally invested in whether or not a remake of a movie I grew up loving will match or even outdo the original. I realize that some fans will hate the remake by default. No matter how good it turns out being, they won't let themselves get past the fact that it's not the original, and that they think the original should have been left untouched. I'm not going to be one of those people. I'm going to go in with an open mind, and try to enjoy the movie on its own terms, instead of focusing on what was changed from the original. However, I'm also going to go in with high expectations. Not so much because I'm really anticipating this version's release, but if you're going to revisit Total Recall, you better make it damn good.
Posted by Allister Sears at 11:31 PM