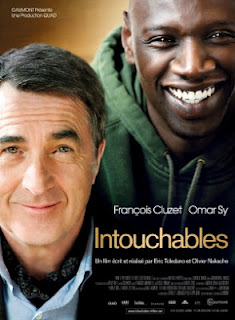 I'd heard good things about The Intouchables here and there. I liked the trailer, and noticed it was playing at my local art house cinema for a longer than average time. What finally got me in a seat to see the movie was an ad the cinema ran during its pre-trailer slideshow. The ad said something to the effect of, "If you don't love this movie, bring your ticket back to the box office for a free movie pass."

That was a pretty bold claim. It's one thing to show a critically acclaimed movie that people are talking about. It's another thing entirely for the theatre to actually guarantee that you'll enjoy the film.

Honestly, when the film started, I was hooked in under five mintes.

I'll avoid the usual cliches that are often used to describe a film like The Intouchables, which is based on the true life story of a friendship that developed between a wealthy quadriplegic and his caretaker, a Senegalese immigrant with a bit of a criminal past. I'm talking about cliches like "inspirational,""heart warming," or other such phrases that call to mind a movie that's filled with lots of people crying and hugging, and musical score with lots of big swelling violins.

I can avoid using such phrases because the filmmakers didn't approach the material like it was some sort of Hallmark movie-of-the-week. Instead, they made a buddy comedy with a touch of drama. The tone of the movie is set early on when Driss, the Senegalese immigrant, shows up at the house of the quadriplegic, Philipe, to interview for the job of a live-in assistant. Driss has no actual interest in the position, and only comes to the interview to get a paper signed that says he's actively looking for work and can continue getting unemployment benefits. However, Philipe ends up giving Driss the job anyway because he's the only applicant to address him as a person, and not just some invalid who needs to be taken care of.

The story is primarily told through Driss's viewpoint, and the humor develops organically as he adjusts to his new career. He's reluctant to engage in the more hands on aspects of taking care of Philipe, and in fact has no actual training for the job. He constantly tries to hit on Philipe's redhead assistant. When he has to take Philipe out for high society outings, Driss doesn't hesitate to point out the absurdities of some of the things Philipe enjoys. For example, when they go to the opera, Driss breaks out into an infectious laughter the moment a man dressed as a tree comes out and starts singing in German.

Whether they deliberately mean to do it or not, Driss and Phillipe end up encouraging each other to take  more control of their lives. For Driss, this means taking on more responsibilities and being a better role model for his family. For Philipe, it means trying to enjoy life the way he did before he was paralyzed.

This movie should definitely be in the running for this year's Best Picture nomination, and if the Academy has any sense to it, it will make sure that this is one of the most heavily talked about movies come award season. Aside from being well paced, well shot, well edited and just an overall shining example of how to tell a story, the film's two leads, Omar Sy and Francois Cluzet, give amazing performances. Like the film, their performances aren't overbearing, but they feel real and convincing. They feel less like actors portraying the people the story was based on, and more like they are the actual people this was based on. Just as The Artist made its lead, Jean Dujardin, a recognized name in America, I'm sure that we'll see Sy and Cluzet in a few movies made in the states.

Overall, The Intouchables is a very lighthearted and fun movie. Even thought the subject matter sounds like something that should be heavy and emotional, it's a movie that's going to put you in a good mood by the time it's over. So if it's playing in a theatre anywhere near you, go see it there, because I'm sure you'll enjoy it even more watching it with an audience.
Posted by Allister Sears at 11:19 PM