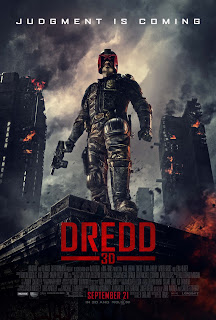 Lets get one thing out of the way first. Dredd is not a remake of the 1995 Sylvester Stallone movie, Judge Dredd. They are both based off of the same comic book character, but they are two different interpretations of the material. In essence, it's like Tim Burton's Batman versus Christopher Nolan's Batman Begins.

Regardless of whether or not you liked the '95 version of Judge Dredd, the new Dredd is significantly better. It's like HBO's The Wire mashed up with Die Hard. The film takes place in a bleak future where wars have left the earth largely uninhabitable, except for in places like Megacity One, a massive city that spreads from Boston to Washington D.C. However, the story itself primarily takes places in Peachtree Tower, a 200 story housing block controlled by a drug kingpin named Ma-Ma.

In this future, crime is rampant, and law enforcement is done by judges, a police force that also acts as judge, jury and executioner. When Judge Dredd and a rookie named Anderson go to Peachtree to investigate a triple homicide, they find themselves trapped in the building by Ma-Ma, who doesn't want them uncovering her massive drug operation. Cut off from all backup, Dredd and Anderson have to battle their way through the tower.

Despite the potentially campy nature of the lead character, Dredd is actually a fairly camp free movie. There's no groan-worthy one-liners. No zippy comic relief sidekick. Most importantly, none of the characters run around trying to convince the audience that they're a total badass. A lot of that may be thanks to actor Karl Urban, who plays the grizzled Judge Dredd. (You may also know him as Bones from Star Trek.) Despite the fact that Judge Dredd is perpetually scowling and never once is seen without his helmet, (a fact that fans of the comic were particularly adamant about for this version,) he doesn't come off as some sort of two-dimensional archetype. Thankfully, even though most of his lines are delivered in a deep, menacing voice, it sounds like nuanced acting compared to the REALLY INTIMIDATING GROWLING used by Christian Bale as Batman.

I say the movie is fairly free of camp, but not entirely free, because there is plenty of spectacular displays of violence. People in this movie get killed in all sorts of unpleasant ways, such as explosions, being skinned, being cut down by all sorts of machine guns, and there is a higher than average amount of people being thrown off a building to their deaths. Still, even the most over-the-top deaths manage to restrain themselves from being cartoonish.

I suppose that on the surface, Dredd does seem like it's primarily a guy's movie, but if there's been one good trend to emerge out of sci-fi action movies over the last ten years, it's the continued emergence of strong female characters who aren't there just for eye candy. Dredd sports two such characters. There's Judge Anderson, played by Olivia Thirlby, and Ma-Ma, played by Lena Headey. As Ma-Ma, Headey is pretty damn terrifying and remorseless. She's more than a match for Judge Dredd and gives him a run for his money right up until the end.

More importantly, Judge Anderson feels like a breakthrough character for the genre. For one thing, it's actually kind of refreshing to see a gun-toting heroine who isn't stuffed into some skin-tight outfit designed to make her cleavage pop out. Her character may be a rookie, but by the end of the movie, she proves to be able to hold her ground just as well as Dredd. On a side note, Thirlby, in her judge's armor, kind of resembles Samus Aran, for anybody who might be considering casting a Metroid movie any time soon. 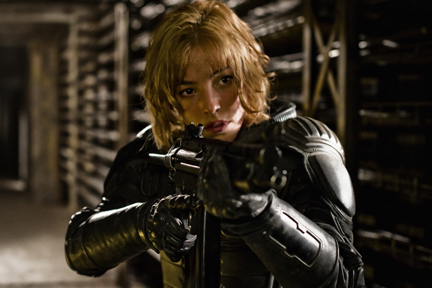 For a genre as frequently visited as "dystopian future," I was caught off guard by how impressive the overall look and feel of this movie was. Visually, this movie is bleak, and I don't mean the sort of faux bleak you usually see in sci-fi movies. The filmmakers used the right combination of location filming, sets and CGI to create a city of slums that feels way too real. There's also some incredible slow-motion shots throughout the movie, largely due to the drug that's at the center of all the violence, a drug that makes the brain perceive reality as happening at 1% of its normal speed. So there are these serene, dream-like sequences interspersed throughout the violence.

Overall, Dredd turned out to really exceed my expectations. The storyline was kept simple and clean so you could stay focused on the suspense, of which there is plenty in this movie. It's unlikely that this film will end up spawning a franchise, considering that it got completely spanked opening weekend, of all things, getting beaten by the latest unnecessary Resident Evil sequel. It also probably didn't help that this film was released primarily in 3D with minimal 2D showings. Still, at least if Dredd winds up being a stand alone movie, it's a damn good one.
Posted by Allister Sears at 12:16 PM