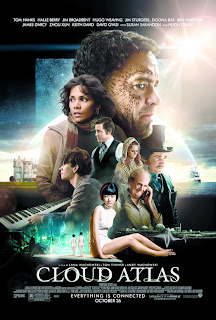 Cloud Atlas is an ambitious film based on a supposedly unfilmable book, but the three filmmakers behind it are no strander to either hurdle. Two of the filmmakers, the Wachowskis, are famous (or some might say infamous) for their ambitious work surrounding the Matrix sequels back to back. Not only did they film two movies, one after the other, but at the same time they also produced a videogame and an animated movie to expand on the story. The third filmmaker, Tom Tykwer, previously met the challenge of adapting a book many had called unfilmable with his movie Perfume: Story of a Murderer. These three filmmakers are possibly the only people working in Hollywood who had the vision and the clout to pull this film off, but they do, and the result is amazing.

To those of you who might be concerned that the Wachowskis would go overboard with the visuals like they did with the latter Matrix films and Speed Racer, (overboard in a good way, in my opinion,) you can relax. They've toned down the look of their segments in the film, so it has much more of a conventional feel to it, and also so that it blends more effortlessly with the visual style of Tykwer's segments.

The plot of Cloud Atlas is a bit tricky to describe, not because it's complicated, but because it is actually six stories interwoven together, each set in a different era. I say "interwoven" and not "intertwined"because although the film jumps back and forth between storylines, plot-wise the stories are unrelated. However, they are united in the sense that they all explore similar themes of love and fighting against oppression. There is also a sort of chain reaction that flows through the stories, where the events from the story set in the earliest era trigger events that affect the events of the next era in ways that become apparent as the movie plays out. These events ultimately end up affecting the future of the human race. It's so epic in its scope that the only ad I've seen to really capture the feel of it is the five and a half minute trailer made for the internet.

Unlike that other ambitious, era-spanning story, Darren Aronofksy's The Fountain, this movie is actually quite approachable. The six storylines in Cloud Atlas are so rich in character development, and so varied in their genres, that each of them could almost work on their own as independent movies. The first storyline is set in the 1850's, where a notary crossing the Pacific witnesses slavery for himself firsthand. Next, a young musician in the 1930's works with an aging composer in the hopes of becoming a composer himself. Then, an investigative reporter in the 1970's finds herself in over her head after uncovering a story about a a nuclear plant. In the present, a book publisher finds himself trapped in a nursing home after trying to flee some gangsters. In the 22nd century world of Neo Seoul, a clone that is bred only to work in a restaurant chain finds a chance to escape. Finally, in a distant, post-apocalyptic future, a tribesman takes on a mission to help an explorer from an advanced civilization.

One of my friends asked me what genre this movie is, and the best answer is that it's all of them. It's a period piece and a sci-fi adventure. It has moments of outright comedy, and moments that are horrifyingly somber. It's a crime thriller, a love story, an action movie an so on. Each of the stories really feels like its part of its own genre, but it's edited in a way that they all feel like part of the same epic. It cuts from a Blade Runner-like future to a period piece story, and yet it manages to maintain its flow.

Part of what helps unite the feel of the different stories is that the same principle cast is used in all six tales. The whole cast really shines in this movie, as they all play characters so different from each other that all you'll find in common with them is their faces, and then sometimes not even that much. The filmmakers employed a team of makeup artists that absolutely deserve an Oscar for their work, having the actors swap races and genders. Perhaps the most notable example of this is Jim Sturgess's character in the Neo Seoul storyline, where the British actor is made up to look Korean. Likewise in other scenes, Korean actress Bae Donna plays caucasian and Mexican characters. Tom Hanks switches from playing a doddering scientist to a futuristic tribesman to a modern day thug. (In case you're wondering from the trailer, yes that character is supposed to be ridiculous.) Hugh Grant plays a few characters that are so far removed from any roles you may have thought of him as playing before, such as an American Businessman or a savage warrior.

Not surprisingly, Hugo Weaving plays a villain in all six timelines.

For the most part, the film is very well paced. It opens aggressively, establishing the six timelines right off of the bat. It does have its slow moments, but just when it feels like it's a good time to duck out for a bathroom break, the story gets a spark in it and it bursts the action forward. Perhaps the only part of the movie I had trouble with was the story set in the post-apocalyptic future, as most of the dialogue is spoken in a degraded form of English. Fortunately the acting abilities of the cast carry the story when the words don't make sense.

Overall, I really loved this movie. The story was something that stayed on my mind well after the film ended. Everything about Cloud Atlas resonated with me: the music, the characters, the story and so on. I know the "everything is connected" movie has already been done plenty of times before, like with Crash, Babel and the previously mentioned The Fountain, but Cloud Atlas felt like a fresh take on the premise. Perhaps it's because out of all of those movies, Cloud Atlas is the most daring in the scale of the story. It's ambitious, but it delivers on that ambition. I don't know if any other directors could have pulled off such a mash-up of genres as the Wachowskis and Tykwer did. In fact, I was so amazed by this movie that I hope at some point down the road, this trio of directors can find another project to collaborate on.