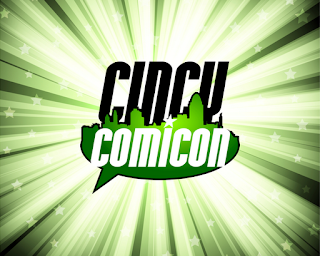 For three years now, the Cincinnati Comic Expo has been Cincinnati's local comic-con. It's been good, but there seems to be a large group of people that thinks it can be much better. Yes, I know, a Cincinnati comic-con is probably never going to be as big an event as the ones in San Diego or New York, but that doesn't mean Cincinnati can't put on a big enough event for it draw crowds to the area.

So, a group of local artists, shop owners, and other business-minded nerds have decided they want to put on a local comic convention of their own, aptly named the Cincinnati Comic-Con. From what I understand, the people managing the Cincinnati Comic Expo haven't been as receptive to outside ideas as some would like, and more importantly, haven't made as much of a point of trying to bring current big names in the industry to the expo. Yes, they've brought many veteran writers and artists, and there is plenty of rising independent talent, but there's been been a notable absence of current writers, artists and other people who are working on big projects in the comic industry and other nerd-related things.

The Cincinnati Comic-Con is separate from the existing Cincinnati Comic Expo, but the goal is to make it a bigger event that gives comic fans more of a chance to meet with comic creators and other like-minded nerds.

And that's where you come in.

They've started a Kickstarter page to raise funds to put on the Cincinnati Comic-Con, which you can support by clicking here.

For those of you unfamiliar with how Kickstarter works, essentially the project creators set a financial goal, and you offer a pledge to help them meet that goal. Depending on how much you pledge, usually some kind of incentive is offered. If they meet their goal, you pay them and you get your prize. If they don't meet their goal, you pay them nothing.

For the Comic-Con project, the rewards offered include things like signed artwork and sponsorship opportunities, (something those of you with small businesses may want to consider). Even if you're not necessarily a comic-nerd type, its a worthwhile project to bring people to the Cincinnati area for a weekend.

If you're a Walking Dead fan, I do want to point out that Tony Moore, who did the art for volume 1 and many of the covers has some cool swag he's offering to backers.

Anyway, enough of my spiel. Head over to their Kickstarter page and help them out.
Posted by Allister Sears at 4:18 PM