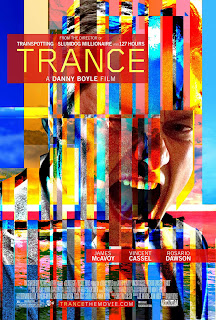 I remember the first time I ever saw a Danny Boyle movie. One of my friends had come over with a copy of Shallow Grave, and simply said, "We're watching this," as if the matter wasn't up for discussion. The film turned out to be a chilling, disturbing psychological thriller that felt like something Hitchcock would have done if he could have gotten away with it in his day. Since then, Boyle has gone on to make films of varying genres, such as crime, romance, horror, family films and stories of personal struggle, sometimes mashing the genres all together. Yet, he hadn't returned to doing a straight-up psychological thriller until Trance.

Trance revolves around three central characters. There's Simon (James McAvoy), an employee at an auction house, Franck (Vincent Cassel), ringleader of a group of thieves, and Elizabeth (Rosario Dawson), a hypnotist. The film opens with Simon explaining to the audience the security procedure for when somebody tries to steal from an auction house. If possible, take the most valuable pieces of art, and drop them into a time locked vault. Don't be a hero. He reiterates a mantra, "No piece of art is worth a human life."

Yet, when Franck tries to steal a painting from under Simon's nose, Simon violates his most basic rule. He tries to attack Franck, but instead takes a severe blow to the head for his efforts. Franck runs off with a case containing the painting, but later realizes that all he has is the frame. Simon is the only person who knows what happened to the painting, but because of his head injury he can't remember what he did with it. Franck then hires Elizabeth, the hypnotist, to help him remember where he put it.

It quickly becomes apparent that there's more going on to the story than initially appears, especially since Elizabeth, a professional, shows little reluctance to assisting a gang of thieves with locating a piece of stolen artwork. Even though Simon, Franck and Elizabeth are working together to figure out what Simon did with the painting, they may be trying to manipulate each other for reasons that aren't initially clear.

The story gets increasingly twisted as the film progresses, and I mean that in two different ways. It's twisted in the sense that the film is loaded with plot twists, and twisted in the sense that there are some rather disturbing moments of violence peppered throughout the film. It may not come across in the ads for the film, but consider yourself forewarned about the violence. It's not constant, but when it happens it can be rather cringe inducing. Hell, while I'm giving you a heads up about things, there's a fair amount of sex in the movie too. Just trying to spare you a few moments of awkwardness that might come up if you were planning on seeing this with your family.

But getting back to the plot twists, sure you might be able to figure out a few in advance, but there are plenty that are going to catch you off guard, even if you've got your eye out for them. They're well thought out too. No cheap shots are pulled here. I don't want to say too much and risk spoiling things for you, but I will say it merits a second viewing to get a better understanding of what you missed the first time around.

Of course, being a Danny Boyle movie, Trance is filled with slick editing and plenty of techno music. It works for the film, but I worry the music may make the film feel a bit dated later on down the road. Going back to the other Boyle film I mentioned earlier, Shallow Grave, there are moments that serve as a time capsule for what must have been the height of mid-90's house music in the UK, and somewhat distract you from the horrifyingly intense thriller you sat down to watch. I don't recall the music in Trance as being that overt, but then again, 10 years down the road it might start to stand out from the rest of the story.

Overall, Trance proved to be a genuine, unexpected surprise. I say unexpected, because as a guy who follows movies intently, I didn't really hear anything about Trance until about a month or so before its release. It was rather nice to see a trailer for a movie I was excited about, and not have to wait months for it to hit theatres. I say genuine, because it's a movie that was clearly thought out front to back and back to front. It somehow manages to be a mix of fun, suspenseful and disturbing all at the same time.
Posted by Allister Sears at 11:38 AM