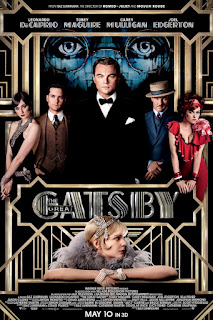 Ordinarily, I do my best to avoid spoilers in reviews, but lets be honest here. We've all read The Great Gatsby. Either you read it in high school, or you read it later in life because you knew it was one of those books that everybody should read. In the event you're one of those few people who haven't read the book yet, I'm not going to go so far as to tell you to not see the movie until you read the book. I am, however, going to insist that whether or not you like the movie that you still pick up the book.

The Great Gatsby is unmistakably a film by Baz Luhrmann. That means certain things are almost guaranteed. Regardless of what era the film is set in, the music will be contemporary, (the exception being his film Australia.) It will be at times brash, and fast paced. Most of all, it will be a story about love.

Baz actually structures his adaptation of Gatsby similar to how he did Moulin Rouge. Both films open with a narrator, distraught over the events that transpired during the story. Here, it's Nick Carraway, played by Tobey Maguire. As a way to deal with what happened, he turns to writing. We get a brief introduction to the time and the place of the story before being launched into a wild and fervent party scene, filled with rapid cuts that jump from moment to moment, in this film it's Gatsby's house party. Then it finally settles down into the main romance story.

I want to emphasize that the pace of the story does slow down after the beginning. I know several people who walked out of Moulin Rouge because they couldn't handle the frenetic pace of the opening scenes, and I imagine the same will apply to Gatsby.

Once Gatsby is introduced, and the stage is set, I suspect this is where some people may have issues with the story. For a novel that's less than 200 pages, Fitzgerald wrote an extremely deep and multilayered story. As such, there's plenty of room for debate about what is central and what is incidental to the plot. After watching the film, my friends and I got into a debate about whether Gatsby was written as a commentary on the lifestyles of the Roaring 20's, told in the structure of a love story, or if it was a love story that was incidentally meant as a commentary on the 1920's lifestyle.

It should come as no surprise that Baz opted to film it as a love story, with the social commentary on the side. His films are all about characters falling in love, against all odds, with them winding up in some combination of living and/or dead by the end. Regardless of how you interpreted the novel, I think Baz's interpretation works well for the silver screen. You buy into Gatsby's lifestyle easily. The parties. The fancy cars. The champagne. (The rap music?) Leonardo DiCaprio plays Gatsby in such a way that not only is he a guy who feels he gets what he wants, you feel he deserves what he wants. So when things inevitably start crashing down around him, you start to see the shallowness of the 1920's lifestyle for what it really is.

Even if you think Baz wrongly emphasizes the film's romance, there is one thing you cannot deny he got right, and that is the look of the film. Fitzgerald used extremely stylish and vivid prose to describe Gatsby's world, so that anybody reading the novel could easily picture the green light on the dock, the windshield of Gatsby's car, and of course the watchful eyes of Doctor T.J. Eckleburg. Baz faithfully translates the Fitzgerald's prose into bright and energetic visuals. When you see everything from the parties to the Valley of Ashes onscreen, it feels as if that's the way you always pictured the settings in your mind, long before you saw a frame of footage for this film.

I am also going to defend his use of anachronistic music for the film. The thing with period appropriate jazz music is that current generations are accustomed to associate it with being a more recent type of classical music. It's what you hear on NPR late on saturday night. Sure, Baz could have played 1920's jazz music for the party scenes, and it would have conveyed that people were having a fun time. But by playing dance tracks and rap music, he did a better job of showing on what was really going on back then. People weren't having a good time. They were having an out-fucking-rageous time.

As a Baz Lurhmann fan, Gatsby is definitely on par with his other films. It mixes being fun and emotional in the way films like Moulin Rouge, or Strictly Ballroom do. (On a side note, if you've never seen Strictly Ballroom, it's on Netflix Instant. Watch it.) The acting, the visuals, and the script and come togther in a way that's highly theatrical and extremely engaging. As for non-Baz Luhrmann fans, well the two people I went to see it with actually watched it with the expectation that it was going to be a train wreck, and said they enjoyed it more than they thought they were going to, so make of that what you will.

One more thing. I've been fairly vocal about how for the most part I'm against 3D movies, with a few exceptions for when it's done well and adds something to the story. Gatsby was a film I intended to make an exception for. The last time I watched Moulin Rouge, I thought it practically felt like a 3D movie, without the glasses on, so I was eager to see how Baz would handle making an actual 3D movie. Unfortunately, the AMC at Newport on the Levee saw fit to botch things up as much as possible. For some reason, they opted not to offer a 3D showing at a time around the 7-8pm block when most people see movies. On top of that, they crammed us in one of the smallest auditoriums in the theatre, as if unaware that this was a major hollywood release. (And the movie started 20 minutes late, but we got free passess for that, so I'm not going to complain about that point.) So, alas, the one time I wanted to see a movie in 3D was the one time there wasn't a convenient showing for it. Should I find the time to catch a 3D showing of this, I'll let you know what I think.

Posted by Allister Sears at 4:57 PM