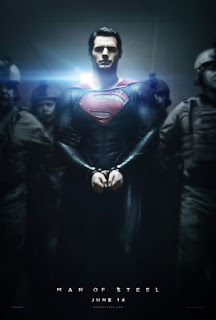 I know this is obvious to a lot of you reading this, but I'm just going to put out these three points anyway because I'm always surprised how many times I hear people pass up a good movie, like Mission Impossible: III or X-Men: First Class, based solely on bad incarnations that came before it.

1. This is not a sequel to the Christopher Reeve/Brandon Routh Superman movies.
2. This is a complete reboot of the franchise in a vein similar to Batman Begins.
3. It's the best damn Superman movie made yet.

One of the problems that I think has always plagued writers of Superman it's too easy to lose focus of the character. The character has been around for 75 years, so naturally he's built up several interpretations and lots of backstory, not to mention an increasingly weird and over-the-top array of powers. What Superman has needed for years is a story that builds upon the most central aspects of the character, while not being afraid to jettison the rest.

Batman, a character that has been around for 74 years, was fortunate enough to get such character treatments in Frank Miller's Batman: Year One, which later inspired Batman Begins. These stories whittled away the most excessive and absurd parts of his character and built a story around the character at the core of them all. In those instances, it was a story of a man who turns into a vigilante when faced with a corrupt police force and a city overrun with crime.

Man of Steel gives a similar treatment to Superman, building a story around the idea of a hero that is really an alien from a dying world. As a result, Man of Steel becomes a tale of first contact with extraterrestrial life.

The way the film focuses on Superman as being an alien feels like a fresh approach, even though it's been touched upon before in other versions. It builds upon the idea of what it must feel to be the only one of your kind. For example, when he first develops his X-ray vision, it leaves him cowering in a school closet. Instead of being the All-American golden boy most versions depict him as, Man of Steel has the American government suspicious of him, only because he is not of this world. Perhaps most surprisingly, instead of emulating Uncle Ben's speech from Spider-Man about "with great power comes great responsibility," Jonathan Kent tells young Clark something to the effect of, "With great power, you should keep your head down, or people will come looking for you."

As played by Henry Cavill, this version of Superman is actually reluctant to use his powers, not only because he risks exposing his identity, but also because he understands how devastating they can be when used. The end result is that we get a Superman with more depth to his character than I think we've really seen in any version.

However, the changes made to Superman's character are nothing compared to this version's Lois Lane. Finally, we get a version of Lois that doesn't just tell us she's an intrepid reporter, it actually shows us. Amy Adams's Lois Lane feels inspired by real-life NBC reporter Richard Engel. She's comfortable in the field, even in the face of danger, and we actually get to see the lengths she goes to get her stories. There's still a feeling of romantic chemistry between her and Superman, but her character feels more like Superman's heroic human counterpart, rather than just his girlfriend.

And you'll have to forgive me for spoiling this one minor plot detail, (it happens early in the film anyway,) but I really want to applaud the filmmakers for doing away with the one element of her character that never made any sense. For years fans have always wondered why if Lois is such an ace reporter, how is she unable to tell that Clark Kent and Superman are the same person? In this version, she not only knows his secret identity, she finds out his secret life before he even dons the Superman costume.

I was hesitant about the decision to use General Zod as the villain. With so many unused Superman villains, it seemed like a lazy move to go for one already featured so notably in Superman II. In fact, using Zod almost necessitates that a film with him in it be somewhat of a remake of Superman II. Well, I know a lot of people were fans of Superman II, but I hate to break it to you, Man of Steel takes the major story elements from that movie and does it so much better. Zod is no longer a scene chewing generic dictator. Michael Shannon portrays him as a cunning, manipulative and terrifying general bent on doing what he thinks he must to ensure the survival of the Kryptonian race. And through his second in command, Faora-Ul, we get a glimpse of what Superman would be like if he truly acted uninhibited. Hell, at times, she comes off as scarier than Zod.

While we're at it, Russel Crowe's portrayal of Jor-El, Superman's birth father, is the best incarnation of that character I think I've seen. He comes off as genuine and compassionate, and definitely has some of the best moments in the film. Again, I hate to anger the fans of the Christopher Reeve-era Superman films, but after you see Crowe play Jor-El, you'll find yourself wondering why anybody ever got excited about Marlon Brando in the role. Brando merely made a cameo appearance when he stepped into the role. Crowe owns it.

It should come as no surprise that since Man of Steel was intended to build off of the success of Christopher Nolan's Dark Knight Trilogy, the tone of this movie is more serious than previous incarnations. Don't get me wrong, it's still a fun movie, but there's a high level of drama in the story.

Speaking of directors with distinctive styles, I was also a bit worried about how much of his personal style Zack Snyder was going to put into this movie. The movies he made between 300 and Sucker Punch were filled with scenes of slow-mo action mixed with super-fast cuts of action, all shot with smoothly controlled stedi-cams. (Actually, I can't say for sure that's true of all of the movies he made during this period because, amazingly enough, I have still not seen Legend of the Guardians: The Owls of Ga'Hoole.)

For Man of Steel, Snyder opted instead to emulate Christopher Nolan's visual style from The Dark Knight Trilogy, with a bit of Snyder's own style from Dawn of the Dead thrown in. Expect lots of shaky hand held camera shots, especially in the early scenes. I'm not saying that's a bad thing though. In fact it makes Man of Steel as if it's part of the same universe as Nolan's Batman films, in the same way The Avengers movies all shared a same visual feel. Not that I'm implying Man of Steel feels like it's going to pave the way for a Justice League movie, either. I'm just saying they complement each other nicely.

One thing that did irk me about this movie was the science involved. In an attempt to further emphasize the "realistic" feel of this movie, the filmmakers tried to give a more scientific sounding explanation for Superman's powers. However, I think they went overboard. Instead of just saying he has powers from radiation from Earth's yellow sun and leaving it at that, they go on to suggest other things affect his powers too, like the nutrient rich nature of Earth's atmosphere. It's a plot point that gets exploited a few times, but feels more like a distraction than a welcome addition to the canon.

Overall, Man of Steel is the reboot that the Superman character, not just the movies, has needed for some time now. This is the movie we were all expecting to get back in 2006 when Bryan Singer made Superman Returns, (which, while disappointing, still isn't as bad a movie as everybody makes it out to be.) This is the kind of movie that can get people who don't read comics to ask their nerdy friends what Superman graphic novels they should go out and buy. (Sad news guys, there aren't as many great ones compared to Batman.)

This a movie I want to see turned into a franchise. I want to see more of what familiar characters are like in this interpretation. I want to see Henry Cavill's Superman take on Lex Luthor, and Braniac, and Metallo, and Parasite, and Dark Seid. (I doubt they'll do Bizzaro, but I'm going to keep my hopes up.) I just ask that they let this franchise continue indefinitely, instead of turning it into a closed ended trilogy with a movie like The Dark Knight Rises.
Posted by Allister Sears at 11:33 PM