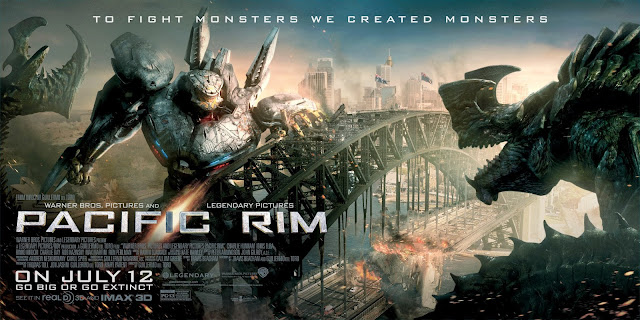 Man, it had been way too long since we've seen something from Guillermo del Toro. Between 2001 and 2008, he'd been churning out quality movies at a pretty consistent pace. They were a mix of comic book movies, such as Blade II and the Hellboy movies, and character-driven pieces such as Pan's Labyrinth. Then for a while he stepped into the background. He was producing movies, but not directing them. His name was attached to many projects that have yet to come to light, such as an adaptation of H.P. Lovecraft's "At the Mountains of Madness." But at last, after a five year drought, we have an actual completed film by del Toro, and it shows he hasn't lost his stride.

When you first hear about it, Pacific Rim sounds like it's going to be just a mash-up of two staples of Japanese sci-fi: Giant monsters, (a.k.a kaiju), and giant mechas. Lets be honest, those two genres have only worked moderately well in the hands of Hollywood filmmakers. Roland Emmerich's take on Godzilla has its most climactic moments half an hour into the movie, and wastes another two hours trying to come up with something close to being as exciting for the finale. Michael Bay's Transformers movies have a few explosions too many, not to mention robots that look like scrap metal slapped together, and prone to racist caricatures.

Perhaps putting together monsters and mechas works in Pacific Rim because the movie is helmed by a guy who understands that you need to put characters before concepts. The battle scenes look pretty incredible in this movie, but they only work because the characters inside the mech suits are developed well enough that the audience will care what happens to them. Yes, as crazy as it sounds, Pacific Rim is a character driven movie that's less about how monsters are destroying the world, and more about the people who are trying to save the day.

The concept of this film is pretty ambitious. I think the prologue for this movie ran about ten minutes long, just setting up the main story. However, it is a well paced prologue that feels like a mini-documentary being played before the film. Basically what happens is an inter-dimensional rift opens in the Pacific Ocean and kaiju (giant monsters) start coming out of it. Governments of the world respond by building jagers, mech suits the size of skyscrapers that are operated by two pilots. At first the jagers are able to beat back the kaiju, but as the years go on, bigger kaiju start coming out of the ocean, and with more frequency. The jagers start losing the battles, and the governments drop support of the program, choosing instead to focus on just building a massive wall around the Pacific. When the wall fails, the few remaining jagers make one last ditch effort to stop the monsters, once and for all.

No, seriously. The bulk of that paragraph takes place in the first ten minutes of the movie, and it makes for one hell of an opening. Its the kind of opening that makes you even more excited about the movie you've just sat down to watch.

As for the rest of the story, it's fun and lighthearted in the way a proper summer movie should be. It doesn't revel in scenes of mass destruction the way Man of Steel did. Instead it really focuses on the development of the characters. I'll admit, Pacific Rim recycles a lot of old action movie tropes. There's the inexperienced rookie who's brought into battle without training. The hot shot hero who doesn't get along with the new guy. The seasoned veteran who gives the big inspiring speech right before the last battle, and so on.

The thing is, it doesn't feel like a rehash of things we've seen before in movies. That's probably because it's surrounded so many things that feel fresh and new. For one thing, this is one of the few action movies I've seen in a while where the female lead is not a damsel in distress, a sex kitten, or just a love interest for the male lead, but is actually a character who gets a story arc as well developed as the male characters.

Also, the way the jagers operate is by having two pilots meld their minds, then controlling the machine as two hemispheres of one brain. It's a unique concept that leads to some of the best storytelling moments in the movie.

It may have the premise of a pulp sci-fi movie, but there's plenty in Pacific Rim to remind you that writer/director Guillermo Del Toro is the same mad genius that made Pan's Labyrinth an Oscar winning film.

Pacific Rim may not have any A-Listers in its cast, but it has a talented crew of actors you might know from their other roles. There's Rinko Kikuchi, who gave an Oscar nominated performance in Babel and played Bang Bang in The Brothers Bloom. Idris Elba, star of Luther, is the commander of the jagers. Trust me. It's not going to be long before Idris Elba starts getting top billing in movies. It's Always Sunny's Charlie Day even has a role, and it's so good to see him play a character other than the absolutely weird and crazy Charlie Kelly from Sunny. He's still hilarious, but in this movie he's more "nerd" funny than "weird" funny. (And I mean realistic nerd funny. Not the "I can't tell if they're laughing with us or at us" version of nerds from Big Bang Theory.)

It's also a great movie to take the kids to. There's not really much in the way of gore, besides neon goop dripping out of interdimensional monsters. No awkward sexual innuendo. I'm just throwing it out there for anybody out there who are parents that are tired of hoping you enjoy the movie you're taking your kids to see, and instead want your kids to be able to enjoy a movie you want to see.

This is also one of those movies you really do want to see on a big screen. Solid characters aside, the jager/kaiju fights are something really best enjoyed on a screen the size of your house. People complain that the movies coming out every year are either sequels or remakes, so when something this fresh and original comes along, you owe it to yourself to see it.

One last note: When you do see it, just make sure you stick around through the first batch of end credits.