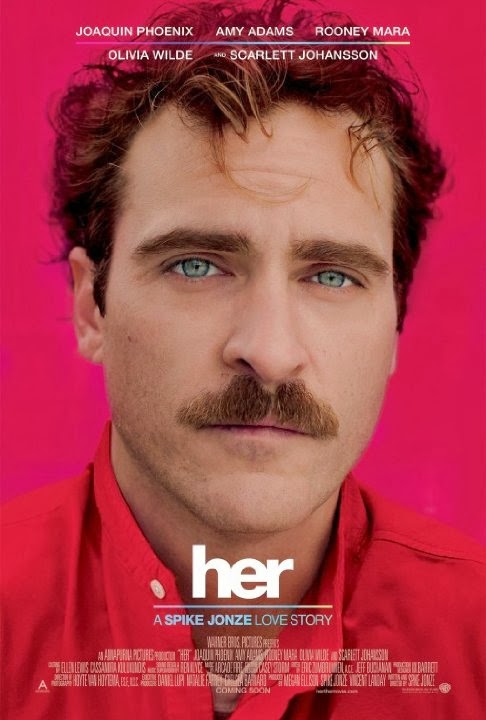 Upon hearing the premise of the film Her, it's easy to get a misconception of what this movie is about. You may have gotten the impression it's about a pathetic loser who is so hopeless at interacting with people that he develops a relationship with the operating system on his phone. Yes, the film is about a man who falls in love with his phone, but he's not some sort of loser with social issues. Rather, Her is a movie about how our relationship with technology is changing, and the strange consequences that result from us trying to make technology easier to interact with. It's a story about falling in love with an artificial intelligence that's advanced enough to have a self aware consciousness.

The film is set in a near future where technology has changed how we interact with people. It doesn't really cast judgement on whether those changes are good or bad. Bluetooth earpieces make a comeback. People actually talk in chat rooms with their voices instead of typing. They send handwritten letters to each other, but they outsource them to a website called Beautiful Handwritten Letters.com. The main character, Theodore Twombly (Joaquin Phoenix), is a man going through a divorce. He upgrades the operating system on his phone and computer to a new one that uses artificial intelligence. After it personalizes itself to him, it takes on a female persona that names herself Samantha (voiced by Scarlett Johansson).

The film does an excellent job of making this seemingly absurd concept feel plausible. When Samantha and Theo first start talking, she comes off as just an easy to interact with operating system. She offers to help sort organize his emails and calendar. Then Theo finds himself talking to her about things that have nothing to do with organizing his life, and soon they find themselves attracted to each other.

Their relationship undergoes similar highs and lows as any human/human relationship would, except at its low points, Theo and other characters in the film do call attention to the fact that it is a relationship with a computer. It's because of moments like that, where the characters question the emotions they're feeling from technology (and the technology itself questions the emotions it feels from humans) the movie has a sort of prophetic feel to it. Her joins the ranks of other sci-fi classics such as Gattaca and Minority Report that are in many ways so on the nose with their premises that it feels like less of a question of "Could this happen?" and more of a question of "What do we do when this happens?"

Lets face it. We are actively working on making computers easier to interact with, and we're working on making artificial intelligence convincing enough to pass a turing test. I wouldn't be surprised if the first time most of us interacted with a true artificial intelligence it would be in the form of an operating system. Think of how big a deal Apple made about Siri on its iPhone. Imagine what a selling point it would be if a company came out with a computer you could actually converse with. The easier computers are to talk to, it's not too hard to imagine people feeling a bond of friendship with them, especially if computers are capable of showing friendship back.

Her is actually a much tamer film than you'd expect from writer/director Spike Jonze. Jonze's previous films have been unabashedly strange and surrealistic, such as Being John Malkovich and Adaptation, (both of which were written by the unquestionably strange Charlie Kaufman.) He's also known for music videos such as Fatboy Slim's "Praise You" and "Weapon of Choice." And of course there's his work in advertising, making ads such as the "Tainted Love" ad for Levi's and the greatest Gap commercial ever.

Considering how strange Jonze's filmography is, Her feels surprisingly down to earth. Yes, the film does have moments of quirkiness, such as having characters play unusual video games, and having high waisted pants be the go-to fashion trend, but it's light on the weirdness, so as not to distract from the characters.

Jonze made a brilliant choice in not giving Samantha a face. She's represented through abstract imagery on computers, but most of the time her only visual presence is as the phone or an earpiece. I think this is what sells the story the most. It shoots past the uncanny valley by not giving her some sort of faux human digital representation. Instead Samantha sounds like a woman Theo is having a conversation with on the phone. There were actually moments in the movie where I forgot that she wasn't somebody Theo was having a long distance relationship with over the phone, but rather the phone itself.

Of course since we never see Samantha, this means most of the dialogue between her and Theo involve long shots of Joaquin Phoenix staring off into space as he holds his end of the conversation. It does take some getting used to at first, but it also helps immerse you in his character.

The film also takes the high road in not representing the future as bleak, or our first encounter with a conscious AI as being apocalyptic. Considering that "future dystopia" and "robot uprising" are two of the most common tropes in science fiction, not using either one in a film set in the future, about computers, seems downright revolutionary. Her felt so grounded in a plausible reality, that when I saw the trailer for the upcoming film Transcendence, a thriller where a man's consciousness is uploaded into a computer and then turns evil, that premise felt hilariously absurd.

Her is an unexpectedly heavy and emotional film. You wouldn't think a movie about a man talking to a phone for two hours could emotionally resonate with you in the way a movie about a more conventional romance would, but Joaquin Phoenix's performance, and Jonze's writing and directing really drive it home. The relationship between Theo and Samantha feels real enough that as the logistical problems of a human and a program being in love present themselves, the tragic aspect of the story slowly creeps forth. Although the aesthetics of the movie may seem dated in a few years, I believe that the core story of Her will definitely age well.