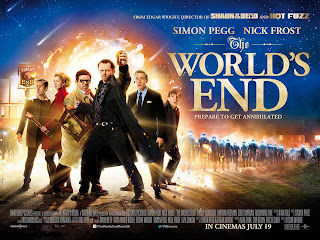 When I first saw Shaun of the Dead, I realized it an incredibly unique movie made by an extremely talented cast and crew. It manage to spoof zombie movies in a way that paid homage to them as well, and went far above the usual fare we see in parody movies today of just re-enacting famous scenes, but with jokes. It showed off writer/director Edgar Wright's ability to shift from horror to romance to drama to comedy, all without missing a beat. And of course, it introduced Americans to the onscreen duo of Simon Pegg and Nick Frost.

The three would reunite a few years later to make Hot Fuzz, a movie about a London cop sent to a peaceful village in the country, that starts out as a fish-out-of-water story, shifts into a film about a small town with a secret, throws in a few elements of slasher movies before exploding into a parody of Michael Bay action, all while being a buddy movie.

Somewhere along the line, the films became referred to as the first two parts in what is semi-officially known as the Cornetto Trilogy, called so because of how the films share themes of friendship, maturity, alcohol, violence, towns overrun by a menacing force, people trying to jump over fences, and a random appearance by a Cornetto ice cream cone. At long last, we've been given the third part of the trilogy with The World's End.

Like the other two films with Wright, Pegg and Frost, The World's End hops its way about film genres. It opens with Gary King (played by Simon Pegg) describing what he considers the best night of his life: attempting an epic pub crawl, known as The Golden Mile, with his high school best friends, back in their home town. However, they never managed to complete the crawl, so years later Gary becomes determined to round them all up, and finish what they started, making it through all twelve pubs to The World's End.

Then they realize their hometown has be conquered by alien robots.

Frost and Pegg switch out of their archetypal roles for this film. While the other Cornetto films had Pegg as the straight man, and Frost as his bumbling sidekick, in this film, Frost is the straight man, with Pegg acting like a full on maniac. I dare say that Pegg's portrayal of Gary King goes right up there with Shaun on the list of iconic sci-fi/comedy characters.

It's actually rather impressive how the film manages to stick to its core premise of friends reuniting for a pub crawl while all around them they're being threatened by increasingly hostile robots. It's largely due to Pegg's character being absolutely fixated on finishing the crawl, against all reason, forcing his friends to come along, if only to try and save him. Then again, that's what I love about movies written by Simon Pegg and Edgar Wright. They manage to take a premise that should be a movie in itself, and make it the backdrop for a character driven story with characters you'd want to see in a movie even without the sci-fi shenanigans happening around them.

Another thing I was surprised by this movie was how it depicted a rather balanced view of drinking. Most movies I can think of that are about friends drinking tend to celebrate partying from top to bottom, with no real consequences. World's End is actually just as much about the fun of drinking as it is about the consequences. Nick Frost's character starts out the film as a teetotaler, telling his alcohol obsessed friend Gary, "You remember the Friday nights. I remember the Monday mornings."He talks about how it takes real balls to go into a pub, full of drunken rugby players, and just ask for a water. I just found it so refreshing to see a character in a movie about drinking, who abstains from drinking, and yet isn't depicted as some kind of square. Granted, Nick Frost's character does start drinking as the movie progresses, but then again wouldn't you if you found yourself surrounded by hostile alien robots?

While there are a few bits of dramatic moments throughout the film, World's End is at it's heart a very solid British comedy. I am a huge fan of how Wright's writing and directing style leads to fantastic moments of comedic timing, whether it's in the form of wordplay or visual gags. There are moments of witty dialogue exchanges followed by lowbrow slapstick humor, or highbrow visual gags mixed with bad puns and obscenities. It doesn't get too lowbrow though. The crudest joke in this film still manages to stay far, far, far classier than anything in this summer's other apocalyptic comedy, This Is The End.

I wouldn't go so far as to say this is an "intellectual" comedy. However, it is a film that's so jam packed with subtle jokes and ingenious moments of foreshadowing that it warrants multiple viewings just to catch everything you might have missed the first time around. It's also funny as hell, which is of course the other reason to watch it multiple times.

The fight scenes in this movie are pretty damn impressive as well. Edgar Wright worked a good amount of action sequences into Shaun of the Dead and Hot Fuzz, but where he really started to cut loose with filming fight scenes was in that non-Cornetto Trilogy movie, Scott Pilgrim vs. The World. That film was loaded with over-the top fights, and Wright incorporates some of that into World's End. The bar fight scenes have ordinary Joes taking on a waves of martial arts savvy robots. It's crazy to watch, but the result is a depiction of what every imagine's he'd be like if he had to get his friends' backs in a bar fight. In other words, its some of the most epic fist fighting you'll ever see in a bar.

Even though The World's End is called the third part of the Cornetto Trilogy, here's hoping that it isn't the last film that Edgar Wright, Simon Pegg and Nick Frost make as a trio. They just work too well as a trio to not give us more movies. Maybe they'll take a line from Douglas Adams, and give us more movies in The Increasingly Inaccurately Named Cornetto Trilogy. Although The World's End might not be on the same level as Shaun of the Dead, (That's a pretty hard one to top for anybody.) but it is certainly one of the best films to come out in 2013.

And it is best enjoyed with friends, and beer.
Posted by Allister Sears at 12:05 PM