A few weekends ago, (right before Halloween, in fact,) I had the opportunity to see the abandoned remains of the Shillito's Department Store building in Downtown Cincinnati. Shillito's had the distinction of being Cincinnati's first department store, opening for business all the way back in 1832. The department store chain was bought out by Lazarus, which in turn was bought out by Macy's. By the time Lazarus had taken over, the downtown store had been moved to a smaller location on Fountain Square, but the building that once housed Shillito's old downtown location is still standing. It has now been converted into the Lofts at Shillito Place as well as being the location for the Cincinnati office of Landor Associates. However, as I learned a few weekends ago, an absurdly large amount of the building remains unused, and unconverted from its department store days.

A one night only tour, called Shillito's Abandoned, gave Cincinnatians a rare glimpse to see the abandoned remains of the Shillito's Department store. The tour was put on by a team from Landor as part a fundraising event to help out Mike Amann, a member of Cincinnati's marketing and advertising community, who was battling cancer. Unfortunately, Mike passed away a few weeks after the event, though the fact his colleagues took the effort to put on such a unique event for him certainly speaks volumes of what he meant to his community.


Everybody in our group was handed a small LED flashlight, then taken up to the sixth floor in a freight elevator. At least, I think it was the sixth. Becoming slightly disoriented on the tour was not an uncommon occurrence. 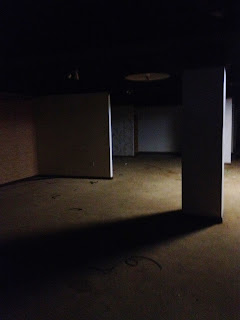 On a side note, I just want to point out that for some reason my flashlight was blue, hence the blue hue in some of my photos. Also, I only had my iPhone on hand as a camera, and not my SLR, so the pictures didn't turn out as well as I would have liked, but you've got to work with the tools you have available. 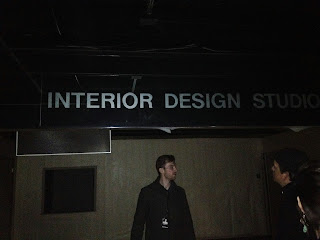 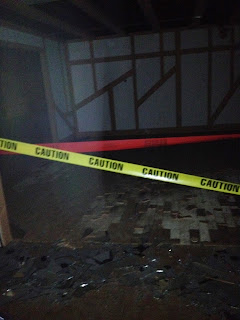 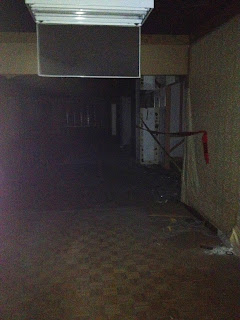 The state of the space was extremely strange. On the one hand, it had all of the trappings of an abandoned building. Peeling wallpaper. Fixtures that had been ripped out in a haphazard manner. Broken glass. (As another side note, I do not remember signing a waiver to go on the tour. If anybody who put on the tour reads this, you might want to have those handy should you put another one of these tours on.)

On the other hand, parts of the building still showed signs of recent use. There were boxes for iMacs and Adobe Photoshop in random rooms. Some rooms were stocked with filing cabinets. There were beer bottles, graffiti and even evidence that a paintball game had taken place at some point. 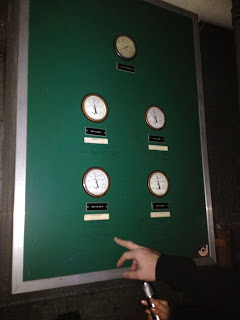 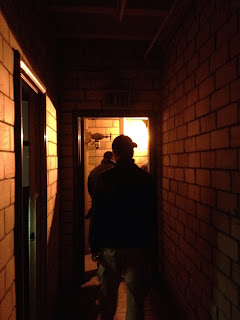 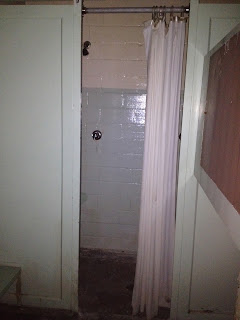 As best I can tell, the Landor team left the space mostly untouched for the tour, aside from adding a bit of ambient background noise in a few areas, and some signage to show which way to go to stay on the tour. The signage came very much in handy. Even though we had a guide on the tour, just about everybody on the tour (including myself) would find something interesting, go off to explore it, and have to run to catch up with the group. I felt a bit sorry for our guide, as keeping us moving through the building at a proper pace must have been like herding cattle.

I'd also like to point out that I missed getting shots of some parts of the tour, because of the brisk pace at which we moved. An iPhone camera is not ideal for taking low light photos in a hurry. 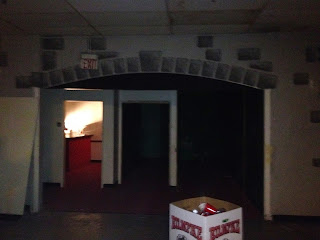 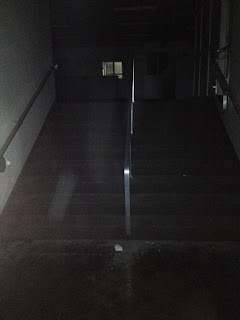 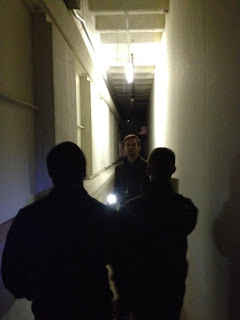 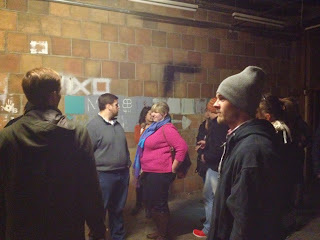 However, there was one place that they put a noticeable bit of effort into fixing up for the tour, and that was Santa Land.

No, Santa Land was on one of the lower levels of the building. I can't say with confidence what level that was because we were led through so many winding passages and stairwells that by the time we reached Santa Land, I had no real bearing for where we were in the building.

At the entrance to Santa Land they had set up a small bar in a room with a giant nutcracker, where Christmas music played, slowed down and remixed to sound sinister. On the walls were photos of what Santa Land looked like in its heyday. I can't say I envied the woman who was picked to act as bartender, as she probably had to wait all alone in the belly of the building with nothing but the creepy music to keep her company in the time between groups. In fact, once she realized that ours was the second to last group, sure she left enough drinks out for the final group, then packed up and got out of there. 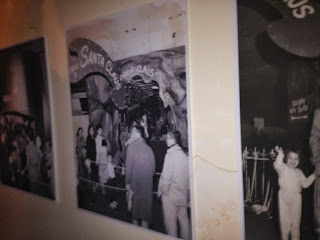 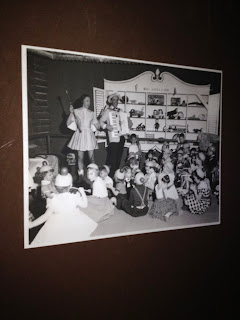 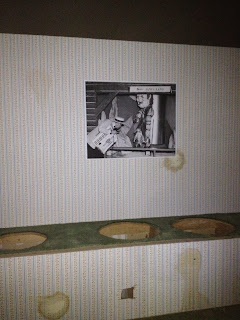 Its a bit hard to tell from the photos, but Santa Land consisted of a walkway between various displays and stations that had performers and puppets. At least, that's what I assume it was like. I'm really just going by the old photographs that were posted on the wall. The space as it is today is really just a walkway set at weird angles with random alcoves off to the side.

Oh, and of course there was a giant display case at the end, which our guide informed us used to be filled with the very toys that were in Santa Land, so that kids could immediately show their parents which ones they wanted. 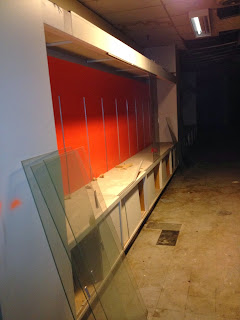 Exactly how much of the building was actually a shopping space and how much of it was offices for the Shillito's store, I can't say for sure. Our guide gave me the impression that at least some of the upper floors, where we started out our tour, was used for offices. However, as we moved through the lower floors, you could really tell how diverse the different departments in this department store used to be. It was essentially a shopping mall, before there were shopping malls. As you'll see in the photos below, there were quite a few departments you won't see in your average department store these days.

For example, there was the sporting goods department, which you could identify from the astroturf carpeting. 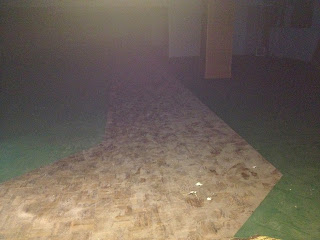 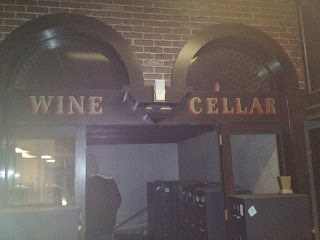 And a bank. It had teller windows and even a safe so large they just left it there, rather than trying to get it out of the building. 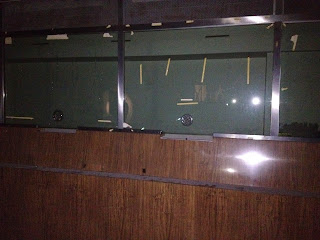 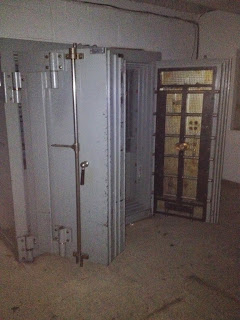 There was even, what I think was once a Pizza Hut Express. I thought I saw a sign indicating that somewhere in the area. 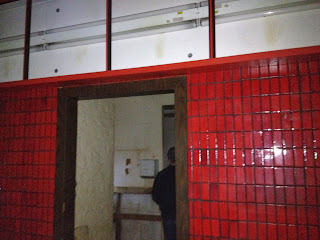 The tour also led us through the back rooms of the building, such as the old boiler room and a few maintenance areas. It was hard to tell what parts of the building were still in use, and which were just relics. In one room there'd be modern cleaning supplies, and in another room there'd be a 1970's issue of Penthouse lying on the floor... which somebody in our group picked up

... I made a point to not shake that guy's hands from there on. 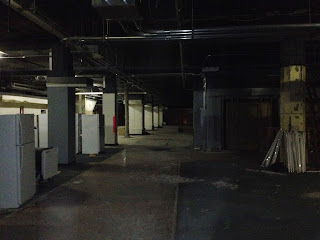 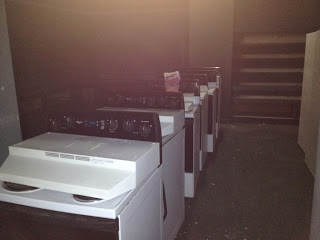 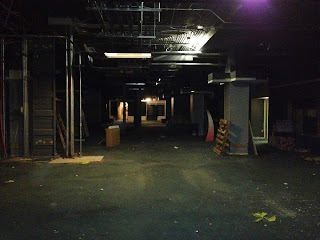 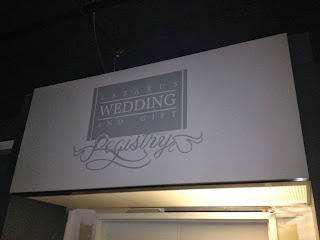 Even though it wasn't billed as a haunted building tour, our guide couldn't help but share a rumor about two homeless people who supposedly broke into the building and froze to death during a blizzard in the 80's. Also, some of the graffiti and signage did enough to instill a horror movie vibe without any help from our guide. 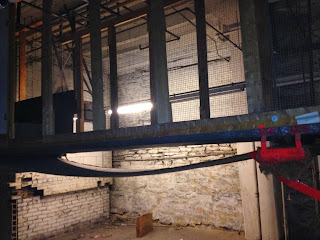 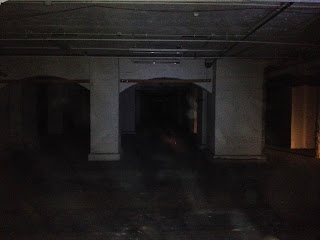 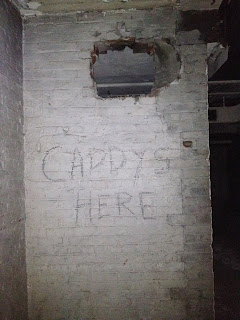 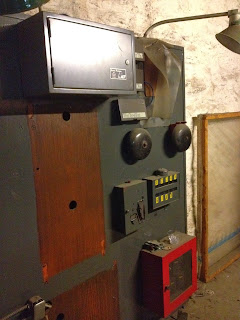 The Shillito's building represents such an oddity as far as downtown buildings go because it isn't exactly clear what can be done with the abandoned space. With so few windows in that section of the building, it can't really be turned into more apartments or office space, unless they can carve out windows in the walls (assuming they aren't load bearing.) I suppose there's always the option of restoring it as a downtown shopping destination, but with Tower Place closed (Cincinnati's former downtown mall) and with stores like Brooks Brothers and Saks Fifth Avenue relocating to Kenwood, mall-style shopping doesn't appear to be in downtown Cincinnati's near future. 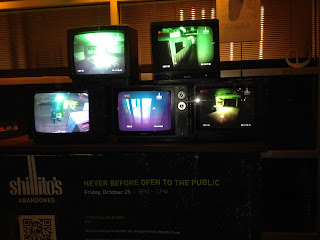 So for now, it sits there abandoned, although I would like to thank the team from Landor, and everybody else involved in putting this tour together, for letting us Cincinnatians take a peek back there.

Now, if only I had some way of checking out the nearby abandoned Terrace Plaza Hotel...
Posted by Allister Sears at 10:36 PM