Adjacent to Tower Place is Pogue's Garage. As I've mentioned before, there are plans in place for both to be demolished, to be replaced by an apartment complex, grocery store, and a new parking garage. I decided to shoot photos of both locations, because I know that inevitably once Tower Place and the Garage are gone, people will wonder what used to be in those locations before.

Its surprisingly easy to forget what used to be in old locations once new properties have been built over them. For example, aside from The Old Spaghetti Factory and Riverfront Stadium, I can't really remember what (if anything) used to be on the riverfront before those buildings were demolished to make room for new stadiums. I'm also sure that many people have already forgotten the hodgepodge of restaurants between Calhoun and McMillain up near UC that were demolished to make room for the new apartments and shopping center. (The fact that there was about 7 years between when they were demolished and when the new buildings went up probably didn't help much either.)

That being said, I wanted to have some photographic evidence of what Tower Place and the Pogue's Garage looked like, at the very least to remind myself what they looked like. In a previous entry, I took photos of the now abandoned Tower Place. This entry will focus on Pogue's Garage. 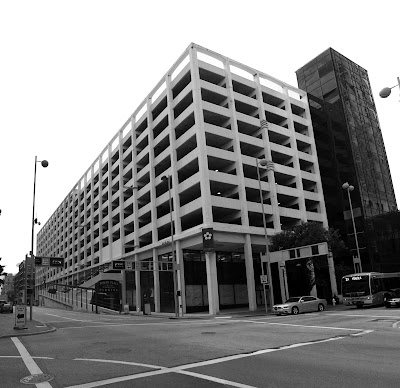 I'm presuming Pogue's Garage takes its name from the H&S Pogue department store that once stood where Tower Place is now. What I don't know is if it wound up being called Pogue's Garage because it was built to serve the department store, or just because of its vicinity to the site. The garage is fairly run down by now, although there are still some good aspects of it that will be missed once its gone.

Perhaps the worst aspect of the garage, as well as its most obvious flaw, is its relationship to the street. Unlike most garages which are accessed by turning off the street, into the garage, the main entrance ramp to Pogue's Garage is actually built out into a lane of traffic. This means anybody driving down 4th Street has to shift lanes just to avoid going into the garage. 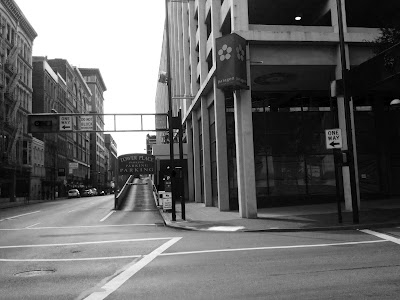 On top of that, it isn't immediately apparent that there is a sidewalk path that goes around the entrance ramp. The way the sidewalk corridor is designed reminds me of that passageway by the caterpillar near the start of the movie Labyrinth. At first glance, it looks like the sidewalk dead ends into a concrete wall, and it's only when you walk towards it that you realize there's a passageway. Not that you'd want to use it anyways. It looks bleak and foreboding by day, and I can't imagine anybody wanting to use it by night. 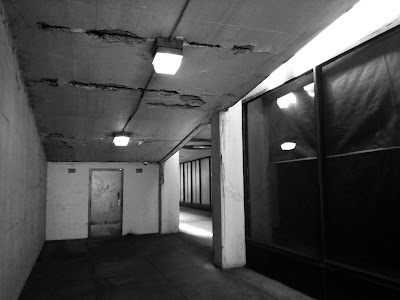 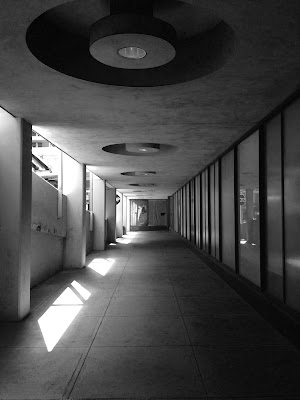 However, there is one exceptionally good feature of the garage and that is the view you get of the city. In truth, almost any urban garage with a rooftop deck will give you a good view of the city its in, but the view from the top of Pogue's Garage is outstanding. Nestled between the Carew and PNC towers, its a great panoramic view that puts you at the middle level of the urban cityscape. You're well above street level, but you can still appreciate the soaring skyscrapers. The proposed new garage, which will be built in the site of Tower Place will probably offer a similar view, but this particular view will someday only be limited to those with rooftop access of the new apartment building. 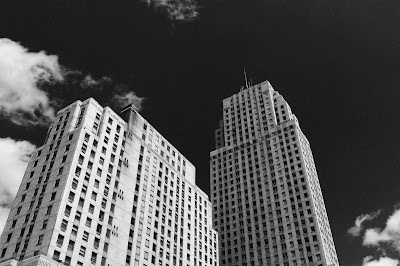 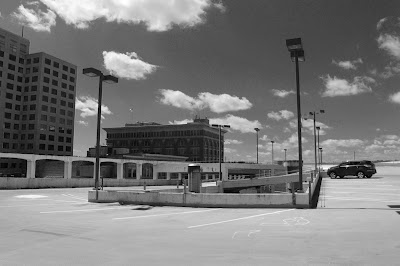 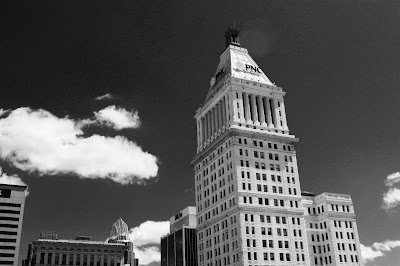 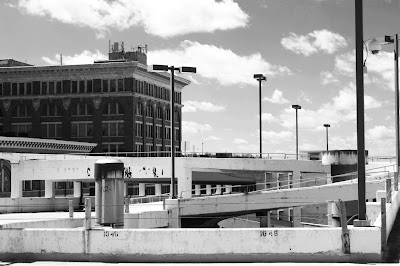 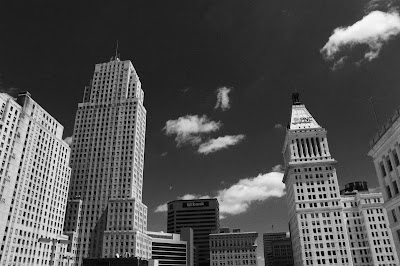 The other feature I love about the garage is the spiral exit ramp. From a functionality standpoint, it's probably less effective than having the exit and entrance routes be the same thing, and the tight spiral probably results in more than a few scuffed bumpers. I'm sure that for these reasons, you don't see this design in newer garages. The thing is, I find them to be fantastic from a visual standpoint, and kind of fun to drive down too. 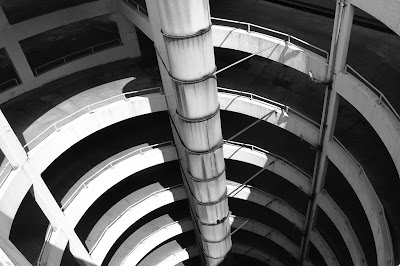 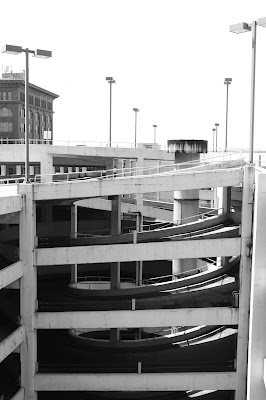 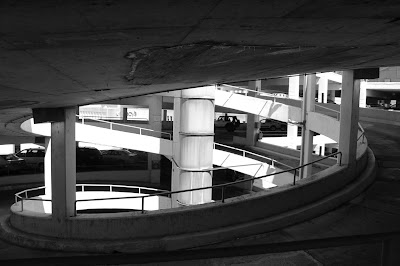 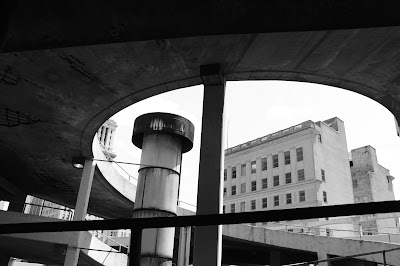 Those two features aside, it's rather evident that the garage needs to come down. Just look at the ceiling of almost any level in the garage and you can see that the concrete has crumbled away enough to expose the rebar at several points. I'm not sure if it's the result of shoddy building materials or improper maintenance, but walking through the garage and seeing all of those cracks does not give one faith in its structural integrity. 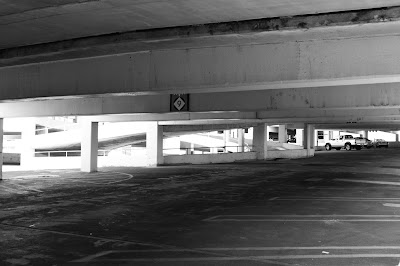 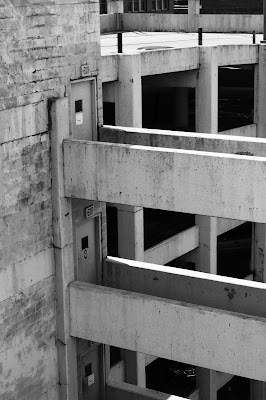 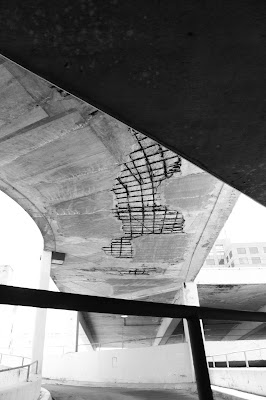 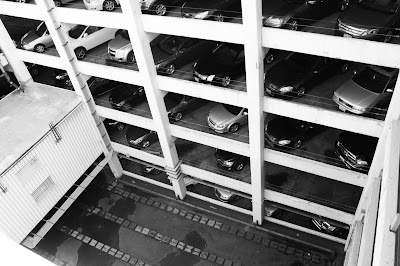 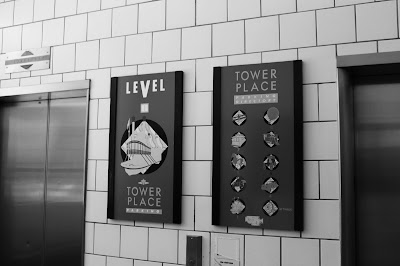 Posted by Allister Sears at 4:08 PM