New Century Hotel, where we were staying, turned out to be much less of an international hotel than our one in Beijing. For example, they allowed smoking in common areas, which was something I forgot hotels ever even did. Another notable thing was what was served for breakfast. In Beijing, the breakfast buffet was pretty standard Western fare (eggs, bacon, pancakes, etc.) with a few traditionally Chinese options, like hard boiled eggs soaked in tea and soy sauce. (Look up the recipe and try them out. They're fantastic.) 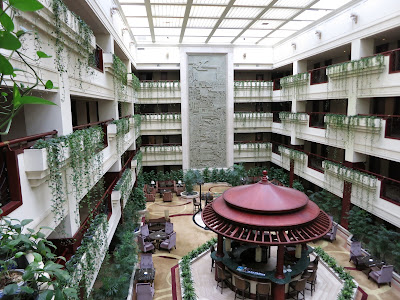 My first morning in Hangzhou, I woke up quite early for some reason. So early, that I was on the front end of when they were serving breakfast. They had only started putting out the Chinese food options. I saw some hard boiled eggs, next to various dishes of unknown meat and vegetable combinations. Not being one to experiment with food when it comes to breakfast, I just took the eggs.

I bit into one, and it was like biting into pure salt. Dr. Wu later explained to me that you're supposed to eat it with the side dishes. Not knowing that at the time, and not seeing any other options, I ate those salty, salty eggs, and waited around hoping something more normal might show up at the buffet, which it eventually did.

In daylight, Hangzhou looked absolutely beautiful. It was a garden city, full of tree lined streets and parks. Everything seemed so lush and verdant compared to what we saw in Beijing. The sky was overcast, but it just added to the beauty.

The bus took us out to the West Lake District, a region known for its gardens and historical sites. Our first stop was at Qinghefang Street, a market that was a mix of street vendors and store fronts. On the bus, Kathy mentioned that they might have scorpions for sale... to eat. Somehow despite not wanting to be experimental with breakfast, I felt the urge to be experimental with a mid-morning snack. Actually, most of the guys did. Sadly, we did not find any scorpion snacks for sale. 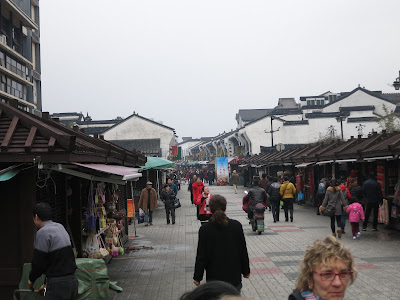 While some of the vendors still wanted to barter, most of the ones with storefronts had set prices. After bartering for a few items, I was relieved to be able to buy some of the nicer souvenirs right away, not having to go through the routine of going back and forth until we reached something resembling a reasonable price. 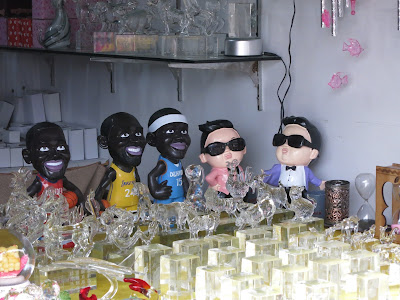 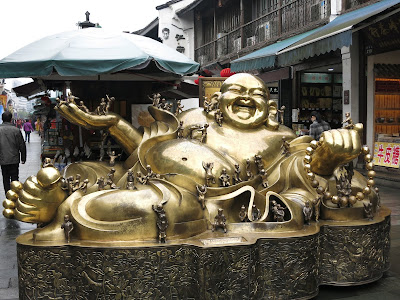 I found a chopstick shop, which turned out to be the same company as where I bought the chopstick set at the Beijing train station. I decided to take my time and look for a nicer set, not getting one just for the sake of having a souvenir. I had apparently also forgotten that my family hosted two Japanese exchange students while my sister was in high school, so my parents already had more than a few sets of nice chopsticks. Not remembering this, I bought another to add to their collection.

I had wandered into the store on my own, but a few of my classmates had caught up with me, also eager to buy some chopsticks. As I waited around in the store, looked at more of the sets they had for sale, and bought yet more chopsticks. This time, just a single pair, not a set. They were engraved with a dog, which is my year in the Chinese Zodiac.

We hopped on the bus again, and traveled through town towards our next destination. I began to have some idea of just how affluent an area the West Lake District was by the number of high end car dealerships we passed. We passed Aston Martin, Ferrari, and Maserati dealerships, and saw a few high end cars on the streets too.

Our next stop was the Yang Gong Causeway, a garden at the edge of the lake, with several bridges crossing over the water. It was one of those quintessential views of China. The landscaping highlighted both the plant life and the rock formations. Small pagodas dotted the park. Fleets of small fishing boats were lined up along the water's edge. Temples sat off in the far distance on the other side of the lake. 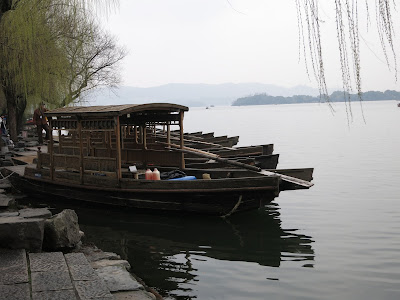 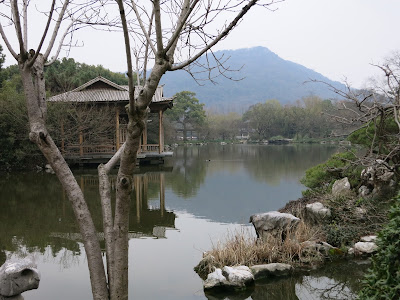 Had I been relying on my film camera, I would have burned through a few rolls that morning, just walking through the garden. I did have a film camera with me, a Holga, but I was using that sparingly on the trip in general. 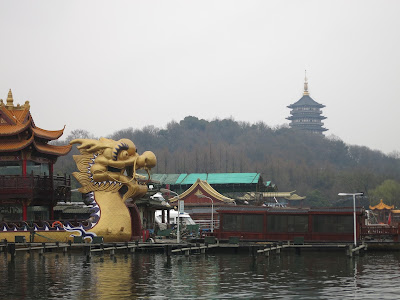 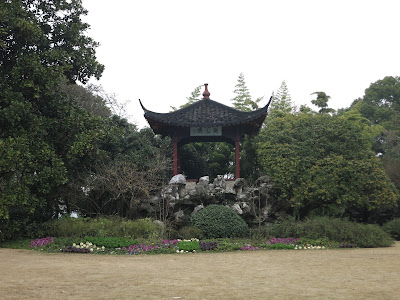 Again, more souvenirs were purchased, although this time it was the cheap variety that kids tend to buy on field trips. I'm pretty sure every one of the guys on the trip bought one of those little slide whistles that sounds like a bird, when used correctly. We probably spent a good half hour blowing them incessantly. The women were not amused.

Next: Dragon Well Tea and the Lingyin Temple.