Now that we were back in our civilian clothes, we headed off to another restaurant for lunch. The bus parked on a main street, as it was apparent that our bus was not going to be able to park on any of the side streets near the restaurant.

We passed by various shops and restaurants along the way, until we reached ours. Unfortunately, I didn't get the name of it, but the decor of the place was definitely geared towards paying homage to the country's history. In the main room, there were street signs on the wall, along with plaques indicating the location of the street as well as historically significant facts about it.


On a stage at one end of the room was a guzheng, a Chinese zither-like instrument that most westerners probably heavily associate with the sound of Chinese music. Kathy jumped on the stool and did an impromptu jam session (for lack of a better description,) then invited us to give it a go. Naturally, I could not refuse. 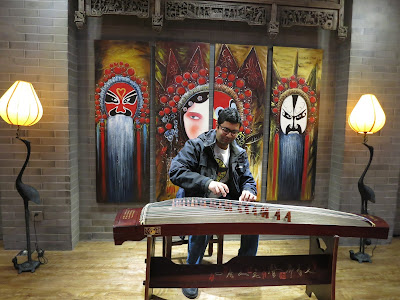 The restaurant had a Cultural Organizer, who took us on a tour of the various dining rooms. Each one was decorated in the style of a room from various decades in the past century. For example, one had a TV on a shelf a by the wall, whereas another had a radio and a sewing machine. 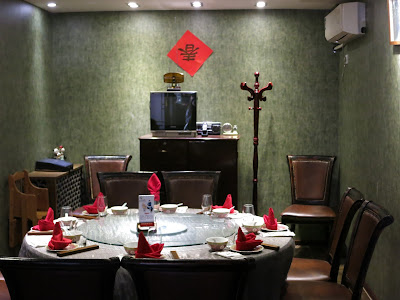 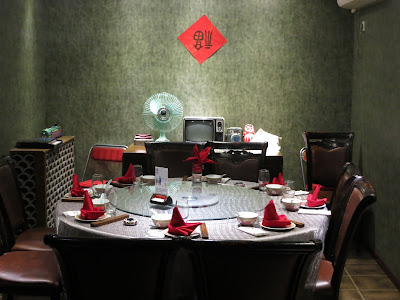 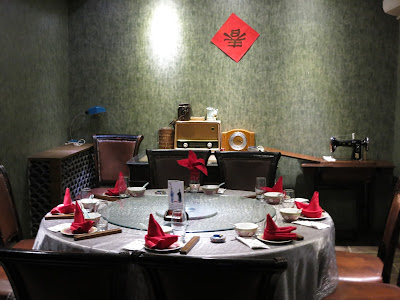 Our dining room, was the Mao Room. Sure enough, it was larger than the other rooms, and had a shrine to Chairman Mao off to the side. He indicated the shrine and suggested that I take a picture of it. 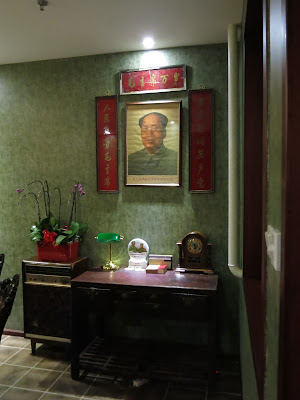 Now we were definitely going deeper into Chinese cuisine with this lunch. The dishes were certainly delicious, but many of them were unrecognizable as anything I'd ever seen in a Chinese restaurant, such as a dish that resembled a sort of fried vegetable cake, or one that was a sort of black rice cake that was then set on fire. 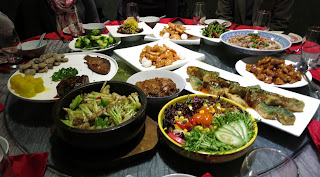 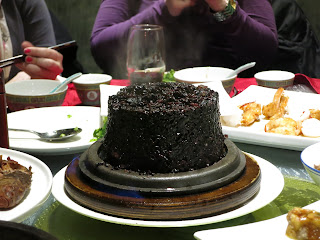 I know I need to come up with better descriptions of food other than "a sort of cake," but those were the two dishes from the meals that seemed most unique.

After lunch, the Cultural Organizer returned asking us to rate the meal and provide feedback. That was more or less the phrasing he used. The food was excellent but it did feel a bit strange being asked so directly what we thought of it, especially since I'm so used to giving feedback anonymously through survey websites found at the bottom of receipts.

I'm not sure how honest his request for feedback was, but I offered one suggestion anyway. (One of my classmates told me doing so seemed rude, but I think he generally wanted advice for how to make guests' experience better.) My advice was this: Have somebody explain what the meals were as they were brought out. With every restaurant we visited, the dishes were increasingly delicious, and it was becoming increasingly frustrating not knowing what some of these dishes were called. I may never see them on an American Chinese restaurant menu, but I wanted to entertain the idea that I may some day come across these dishes again without having to buy a ticket to China.

Or, if I ever did find myself in China again, I'd like to remember what to order.

After lunch , we made our way to the train station, where we would catch the bullet train to Hangzhou. By now the smog was practically palpable. I could feel it as grime clinging to my face. Some of my friends had brought surgical masks with them on the trip, and were now starting to wear them, without a trace of irony or humor. I did have one that I had bought at a grocery store when I first arrived, but I opted not to use it, as it looked somewhat fancy and I had bought it as a souvenir.


We had a bit of downtime at the train station, so I did some impulse souvenir shopping, out of some weird concern that we wouldn't get many opportunities to do so over the next few days. I wound up buying a Chinese copy of GQ, and a colorful set of chopsticks.

My friends also bought a decent amount of beer, which made sense since the G-Train, despite traveling between 150-250 mph, was still going to take five hours to get to Hangzhou. We were also told we could buy food to take with us on the train, but as we had just had lunch, I wasn't in the mindset to buy fast food. I figured I'd just get something on the train. That turned out to be a disappointing decision, but I'll get to that later.

We also stocked up on one of my favorite things about shopping for snacks in Asian countries: exotic flavors of familiar snacks, like kebab flavored Lays chips.


When we boarded the G-Train, I made sure to grab a seat by the window. I felt the way I remembered feeling the first time I can recall boarding an airplane. As an American, the idea of high speed rail, feels novel and futuristic. Hell, living in the midwest, the idea of any sort of rail infrastructure feels novel. The only passenger trains that pass through my city do so at odd hours of the morning, when the tracks aren't in use by the freight lines. For a region as densely populated as the northeast quadrant of the USA is, it's bizarre that the only true passenger rail infrastructure is along the east coast.

The train took off, and the city of Beijing zipped by. Soon the buildings gave way to the countryside, but the smog persisted. It was like that scene from The Mist where they drive on, hoping to drive far enough until they make it out of the fog, but it just never seems to end. The sky did clear up for us eventually. For a while, the landscape was just rocky mountains, but eventually it gave way to lush greenscapes. 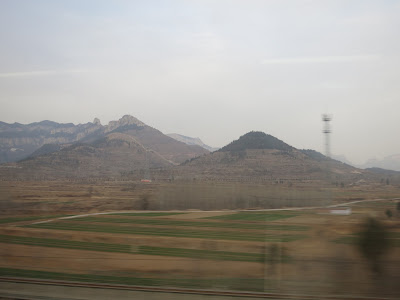 The novelty of being on a bullet train soon wore off, and it soon felt like being on an airplane again, except it was quieter, and we could freely move about at all times. Apparently, entire rows of seats could be rotated to face each other, so a few of us re-arranged our rows. Sure, our knees were now bunched up together, but at least we could have a proper conversation instead of trying to talk down a row.

We were told that there would be food available on the train, and there was, but it wasn't exactly what I was expecting. In my head I was picturing a proper dining car, like in a spy movie, with little tables where you can order a full dinner. Realistically, I was even prepared for something closer to airline food. In reality, the dining car options consisted of various snacks. The most filling options were a bowl of noodles (the microwave kind,) or a plate of pork buns.

I was given a tray with six pork buns that, like the noodles, appeared to have been microwaved. I bit into the first one, and was very confused. The contents of the bun were clearly not pork. In fact, it wasn't even meat. It was some sort of seaweed, vegetable filling.

I asked Steve if she was sure the woman in the dining car said it was pork buns. He said that maybe she just said it included pork buns. I took a bite of the next bun, and it had some sort of almost gelatinous purple filling, which was probably vegetable again, and definitely wasn't pork. Finally I took a bite of the third one, which actually turned out to be pork. The other three buns were the same combination of fillings: green vegetable, purple gelatinous vegetable, and pork. So at least there was some pork.

We arrived in Hangzhou Station, which I was told was one of the biggest train stations in China. It felt more like an airport than a train station, both in terms of size and architecture. 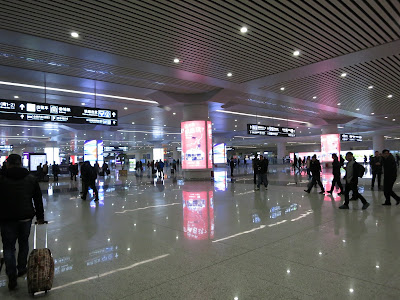 It was night when we arrived in the city, but from what I could see in the dark, it looked like a much more open city. Maybe Hangzhou was actually a cleaner city, or maybe it just didn't have an international reputation for being polluted, but the air felt fresher. The city also looked much more vibrant and lively than Beijing, but again, we didn't really get out and explore much of Beijing, so it wasn't a fair comparison.


We checked into our hotel, the New Century Hotel Xiaoshan, then were given a brief layout of the area, just in case we wanted to get a late meal. As it was very late, our options were Kentucky Fried Chicken, or McDonald's. While I've heard that KFC is wildly popular in Asia, (possibly more than it is in the US,) I opted for McDonald's. It's my default travel food.

Having McDonald's, or visiting a Hard Rock Cafe, are two things I generally do when traveling abroad. No matter how great the cuisine is wherever I go, I've found that I occasionally need a break from being a tourist, and need something comfortable and familiar. Hence, McDonald's. It's like doing a soft reset for my system. If I have at least one Big Mac part way through the trip, I know I'm not going to be days into the trip, surrounded by fantastic cuisine I'll never see again, and thinking "I'm really craving some American fast food right now."

Also, there's the academic reason for wanting to visit McDonald's. As I mentioned before, localization of international products is something we've studied repeatedly as part of the MBA program at Xavier. I know that McDonald's more or less uses the same menu around the world, but they also have regional dishes, depending on the country.

My first Chinese McDonald's did not disappoint. Among the menu items were some sort of chicken and rice platter, and something called the Double German Sausage Patty, which was two sausage links drizzled in mustard, on top of two beef patties, served in a pretzel bun.


When we approached the counter, the cashier handed us a menu with pictures of all the dishes available, and more or less communicated to us that we should order by pointing at what we wanted. I opted for a Big Mac, but it turned out to be one of the sparsest Big Mac's I'd ever seen. It might have been a regional thing, or maybe they did a bad job of preparing it. Either way, it was close enough to leave me comfortably settled in for my first night in Hangzhou, a city I new almost nothing about.

Next: The West Lake Area
Posted by Allister Sears at 10:24 PM