The morning started off at a fast pace. We had breakfast and checked out first thing in the morning. As we boarded our bus, I saw that the man selling counterfeit goods, from our first day in town, was back. He made one last sales pitch to our group, but alas, it was to no avail. 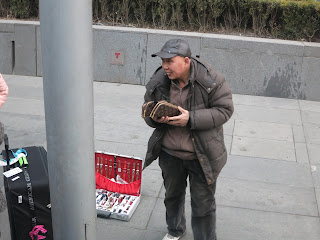 The Beijing we drove through was not the same one we had seen days before. Everything was covered in a thick impenetrable fog. Even the CCTV building, which was just blocks away from our hotel, couldn't be seen. It was like being in Silent Hill, or some other 90's video game with a constant background fog to cover up the fact the game console couldn't fully render the environment too far into the distance. 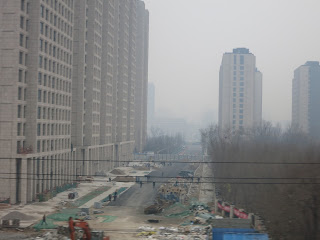 And at first, it gave the city an other worldly feel. That is, until I registered what it really was I was seeing: Beijing's infamous smog. No longer was it just a thick brown haze, visible on the horizon. Today, it was a poisonous cloud that invaded the city. Perhaps someday Beijing's smog will be romanticized the way people talk of the "London Fog" as if it weren't polluted air. Years from now, we may be buying "Beijing Smog" jackets.

But for now, this was the air I was breathing, and it alleviated my disappointment that I wouldn't get to spend more time in Beijing.

We had to leave the hotel dressed in our suits because that morning was the first of the company visits we had scheduled for the trip. We were going to visit the China location for Delphi, an international auto parts manufacturer. Unfortunately, there seemed to be a bit of a miscommunication about what we were supposed to be doing there. We had blocked out about two hours to meet with company representatives, for them to inform us about what they do, and for us to get a better understanding of how business works in China.

Instead, we were given a tour of the factor floor that lasted about fifteen minutes. While it was certainly interesting, it didn't really give us any insights into the company's business process, or how this was any different from any factory anywhere else in the world.

Dr. Wu and the reps from the Asia Institute quickly adapted to the situation. After we piled back onto the bus, we were given the option of checking out a Chinese Wal-Mart (for the record, they meant an actual Chinese Wal-Mart, not some Chinese equivalent of Wal-Mart,) or we could visit a furniture mall.

The idea of visiting a Wal-Mart in China genuinely interested me. A common topic in many of my MBA classes was re-inforcing that companies cannot assume that a store opened internationally can operate the same way it does in the states, regardless of how strong the brand is in the US. Home Depot and Best Buy both famously failed in China, due to failing to understand the Chinese Market. Other brands, such as IKEA, have managed to do quite well, because they adapted and tailored their business models for the local consumer.

Naturally, I wanted to see how Wal-Mart, one of the biggest brands in the US, was adapted for Chinese buyers. However, they decided we would visit the furniture mall instead. I suppose that made sense. There is only so much time one can eat up in a Wal-Mart, anywhere in the world, especially if you're just browsing. 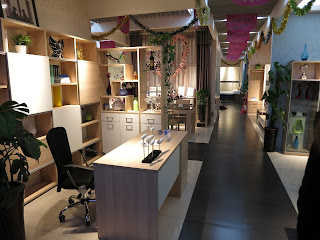 The furniture mall had the English name of Top City Shopping Center, and it was simply a mall where every store sold furniture or home furnishings. It proved to be informative in a way I didn't anticipate, as it showcased the supply for the demand caused by an increase of wealth among the Chinese.

There was an immense amount of variety in the types of home furnishings available at the various stores. Some of them offered goods that had a traditional Chinese aesthetic to them, such as hand carved wood, with geometric shapes, stained with mahogany varnish, or sculptures of dragons or Buddhas. Other stores sold much more modern looking furniture, with minimal ornamentation. Depending on your aesthetic orientation, it either had a distinctively Asian or distinctively Scandinavian appearance. 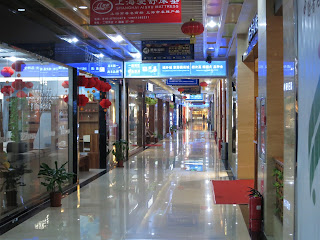 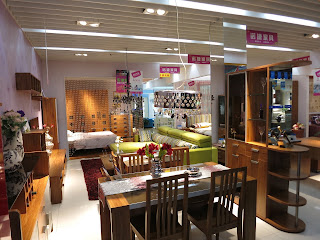 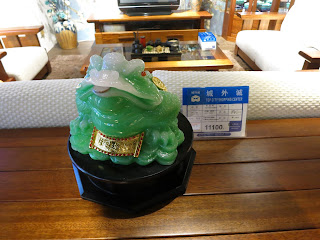 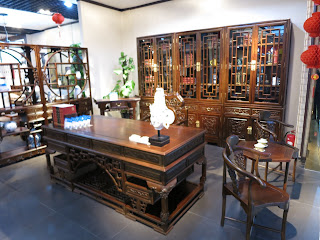 Then there were the stores that catered to those craving more traditionally Western furnishings, allowing them to decorate their houses to look like a quaint Rhode Island cottage, or English parlor. There were products that seemed to mash various styles together, such as wood sculptures of English women done in a traditionally Chinese fashion. 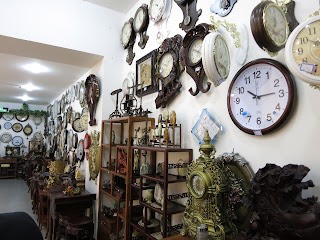 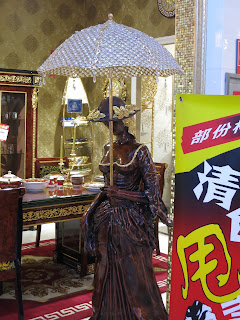 And of course, there were stores offering replicas of famous artworks. Yes, even in China there's apparently a demand for copies of Michelangelo's "David." It seemed that here, you could have it custom hand carved too. 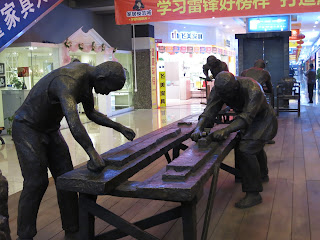 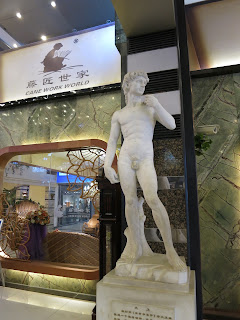 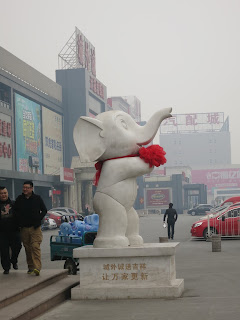 We still had a bit of time to kill after the mall so we drove about town a bit more. Then the men and women in the group took turns changing clothes on the bus so that we didn't have to spend the rest of the day in our suits.

Next: Lunch, China through the ages, and the bullet train.
Posted by Allister Sears at 10:24 PM