Dinner that night was at a restaurant called China Lounge, and was also our official orientation meeting with the Asia Institute. It seemed a bit odd at first to do the orientation meeting after a whole full day of sightseeing, but I guess they figured we'd be more likely to focus on what they had to say if they gave the presentation over food, and if we had already gotten two of the major tourist sites under our belt. 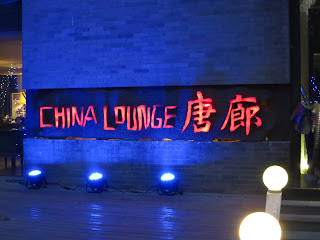 They had reserved a room for us to have to ourselves. At first I figured it was just because of the presentation, but as I later realized on the trip, it seemed like a fairly common thing for large groups to dine together in separate rooms. I only draw this conclusion because many of the places we ate at had a surprisingly high number of private dining rooms.

I was a bit worried about the fact that just about every meal on our itinerary was going to be Chinese food. Yes, I know that seems obvious, given that we were in China, but as much as I love American Chinese food, it's not something I could have for every meal for a week straight.

Fortunately, as I quickly realized, American Chinese food is an amalgamation of various types of cuisine from all around the country, and usually made oiler for American palates. So while lunch was more or less what I had in mind when I thought of Chinese food, there was much more flourish and presentation to dinner. The appetizers that were brought out had a very minimalist presentation to them, and weren't at all anything I recognized as the usual Chinese appetizers. 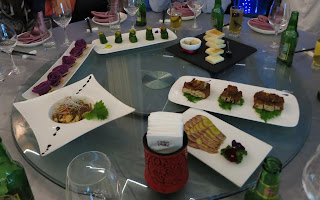 The specialty for the night was Peking Duck. I'm not sure I've ever ordered that in the states, but if I did, I'm pretty sure they don't usually do the full show to go with it. The duck was brought out on a trolley, fully cooked. With surgical precision, the chef then took a knife and quickly stripped the duck of all of its meat, acting swiftly and cleanly. Soon the duck was practically down to its bones, with the meat in a pile next to it. It's then served on these little pancakes, with various vegetables you can put onto it, so it's almost like a duck taco. 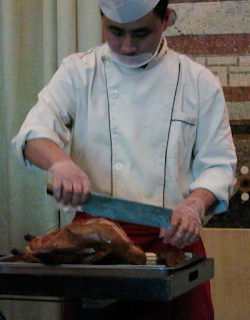 The orientation portion of dinner was primarily a basic rundown of what we'd be doing on the trip, which businesses we'd be visiting, which tourist sites we'd see, and which days we'd be expected to dress in business attire. It was in essence the itinerary packet we'd been given in advance, done as a Power Point presentation, which was good because I had the hunch that a few of my classmates hadn't really gone over it.

At some point during dinner, a few of us started to kick around the idea of going to a karaoke bar, or K-TV as they call it in China. About half of the group seemed interested, and Sharon and Kathy said they'd take us to a bar they recommended after dinner.

Somewhat naively, we insisted that they didn't have to actually take us to the bar itself, and it would be fine if they just told us where to find it. After all, they had a long day of leading us around, and we didn't want to keep them up. Sharon and Kathy in turn insisted that we'd be better off if they just took us there. I was under the self delusion that as a well versed traveller, I could find any place if just pointed in the right direction, but as I realized, none of us were going to find this place without their help.

I was expecting that they were going to lead us towards some sort of bar district with a bar that was clearly marked K-TV on the outside. (In all fairness, we did see several prominent K-TV signs as we drove around town.) Instead they led us down a street, and under a highway overpass, which from the look of it was leading us away from anything interesting. We then popped down into the subway, not actually getting on the subway, just using it as a shortcut, then emerged in front of a what appeared at first glance to be a plain, innocuous office building.

From where we stood, I didn't see anything on the outside that gave any indication that there was a K-TV bar inside. Of course, that might have been due to my inability to read Chinese signage. (Also, I didn't even know what we were looking for.) As if to further ensure we couldn't have found this place on our own, it was on the second floor of the building. With such an inconspicuous location, I was expecting that this wasn't going to be a great K-TV bar, but just the one closest to the hotel. Which would have made sense, since we did have to do a business visit the next day, and I imagine Sharon and Kathy didn't want us out late wandering around a strange part of town on our own. 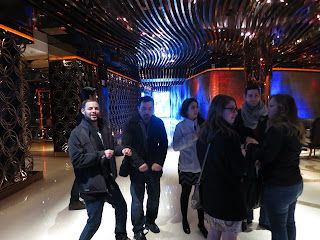 When the elevator doors opened on the second floor, the bar had the glitz and glamor of a proper night club. It was practically empty, but that was probably more due to the fact it was a Sunday night than being an indicator of the quality of the bar, which, for the record, was called Melody.

The way that K-TV works is that you rent out a private room for a few hours, pick your own songs from a machine, and buy all of your drinks in advance. They had a small shop off to the side, but Steve took care of the drinks. The host led us to our room, and a few minutes later a server showed up with our drinks.

The karaoke room was small, but perfect size for our group of about nine. It had couches, disco balls, and several TVs showing the karaoke videos on it. There was a stand with an old school microphone permanently affixed to it, but you could rock the stand back and forth like a rock star. They also had extra microphones so whoever wanted to jump in and sing along could.

Again, we told Kathy and Sharon that we'd be fine on our own from here on out. We really didn't want to keep them out late just for our sakes. Well, it turned out that us being fine from that point out again turned out to be a lie. The song selection machine proved to be a bit trickier to use than we expected. There was supposed to be an English language mode on it, but failing to find that we just settled for English language songs, so we still needed Kathy and Sharon's help, in addition to Steve's... and one of the hosts.

Normally I have my go-to karaoke songs, like "Don't You Forget About Me," stuff by The Killers, Chris Isaak, and a few deeper cuts depending on the crowd and the song selection. However, as we were having trouble with the machine, I opted to go along with whatever reasonably well known top 40 hits the others in our group picked out. Also, my classmates were adding songs to the playlist so quickly, I would have held things up if I took the time to scour the machine for the "right" song.

The joy of using a private room for karaoke is that it lowers everybody's nervousness threshold for performing in front of others. A few of the women in our group came along just because they thought going to the bar itself would be fun, but had no intention of singing, and yet sure enough, as soon as the Spice Girls' song "Wannabe" came on, they were all on stage. It also turned out that a few of my classmates were karaoke aficionados. Lindsay, it turned out, could belt out a few soulful ballads. 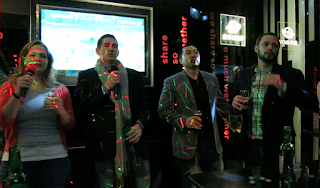 I think Kathy and Sharon's plan was legitimately to help us find the place, set us up in the karaoke room, them head back to the hotel, but then either we talked them into staying for a few songs, or they decided the might as well stick around for one or two. Either way, they joined in on the fun of K-TV. Kathy and Sharon sang a few songs too, some in Chinese.

One odd thing I noticed (and had heard about before) was that some of the songs had familiar backing music, but completely different lyrics and melodies for the actual songs. For example, it took us a while to recognize one song they sang because the main melody of the song was brand new, but eventually we realized it was the backing track for Gwen Stefani's song, "Hella Good." 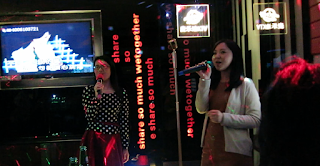 Eventually Kathy and Sharon did say they really did have to leave, but at that point we realized it was a good time for us to head home as well. Tomorrow was going to be a busy day that involved both a company visit and traveling to another city, so it was probably best that we got some rest.

Next: Beijing smog and the first company visit.
Posted by Allister Sears at 10:36 PM