After lunch, the bus took us to Tiananmen Square. As our guide, Chris, pointed out to us as we approached the Square, we probably knew more about it's recent history than he did. He was referring to the protests in 1989 that culminated in what has become known as the Tiananmen Square Massacre, a protest that ended with Chinese soldiers killing hundreds of civilians. Despite having been built in 1651, I realized that for me, and probably many of my generation, the Square has become almost entirely synonymous with the protests.

The government somehow managed to both acknowledge this association while at the same time not acknowledging it. There are no plaques or memorials for those who died during the protests, but there is a strong presence of security around the Square. We entered the Tiananmen Square through an underground pedestrian tunnel on the south side, and had to pass through a security checkpoint. As a tourist group, composed mainly of non-Chinese people, we were quickly let through, although the guards did try to briefly hold back some of the Chinese members of our group. They were allowed to continue through when Chris explained they were with our group.

On the south end of the Square sits Zhengyang Gate, a massive stone gate with a tower perched on top of it. The wall it was a part of had long been demolished. Unfortunately, I didn't get a chance to explore it much closer as our group was on a bit of a tight schedule to make it through the Square and to the other side of the Forbidden City, where our bus would meet us. We weren't in a rush. We just had a schedule to keep.

The Square was flanked on both sides by museums, and in the center stood a mausoleum to Mao Zedong, and the Monument to the People's Heroes. In front of the mausoleum were the sort of triumphant statues to the people you tend to see in countries with communist history, and the architecture of the museums and the monument had that rigid geometric design that was typical of communist architecture as well. 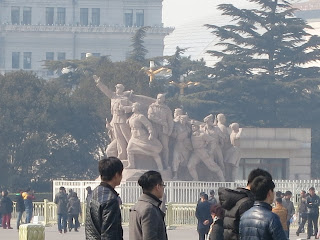 Bisecting the square is a long video wall. I have absolutely no idea what was being broadcast on the wall, but the video wall enjoyed a bit of internet notoriety a few years ago, when a photo taken of the wall showed a video of a sunset being played on it. It was accompanied by a story that claimed that Smog had gotten so bad in Beijing that the government resorted to showing a video of a sunset, at sunset, because people couldn't see it any more through the pollution. (This isn't true. The video actually showed the sunset among other things, and was broadcast throughout the day, regardless of the smog.) 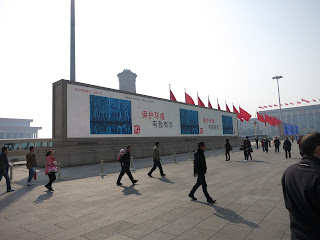 As we neared the Tiananmen Gate, I reached the spot of the obligatory photo almost everybody takes when visiting Beijing: a picture of one's self in front of the Tiananmen Gate with the portrait of Chairman Mao. Seriously, look through the photo album of any friend of yours who has been to Beijing. Some version of that photo is undoubtedly there. It's China's version of the picture in front of the Eiffel Tower, or Leaning Tower of Pisa.

It took a few tries to actually get the photo I wanted, as the first of my classmates that I handed my camera off to had a shockingly bad eye for composure. After a few tries, I told her to hand the camera off to my roommate, Josh, who managed to get the exact picture I was looking for on the first try.

As empty as Tiananmen Square was, there was a sizable crowd around the bridge leading to the Tiananmen Gate, which is the entrance of the Forbidden City. The crowd was understandable, as the gate was never intended to handle a daily influx of tourists. Once we were over the bridge and through the gate, the crowd dispersed again. 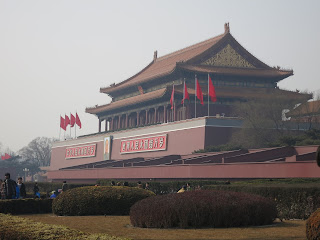 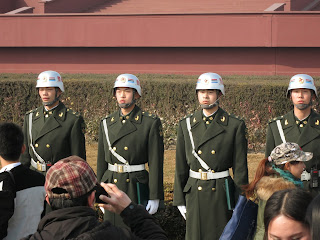 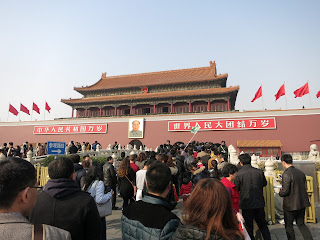 We were given our tickets to enter the Forbidden City, and as we stood before the Meridian Gate, the proper entrance to the Forbidden City, Chris explained that of the three passages before us, only the Emperor was allowed through the center one. Quite noticeably, tourists were primarily entering through the two side passages. I asked Cathy if we were allowed to go through the central passage, and she said that we were. I asked again, just to be absolutely sure, because the last thing I wanted to do was cause an international incident. I could just see this as being one of those instances where the police swarm upon me halfway through the gate, and I wind up in prison for entering through the Emperor's gate.

Again, Cathy assured me that it was okay for tourists to enter through the central passageway. So a few of my braver classmates and I entered the Forbidden City through the Emperor's passageway. Why wouldn't you? It was a view of the city that was once reserved for a handful of people. Considering how nicely symmetrical the city was, it seemed like the only logical way to go in, having everything perfectly framed as you enter. 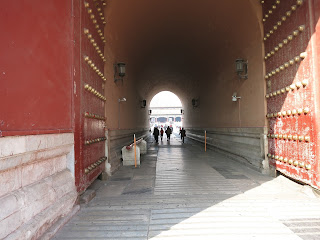 The Forbidden City was larger than I expected, in some ways, yet smaller in others. The size of the complex is massive. "City" is an apt term for it. However, most of its size is taken up by massive courtyards. The buildings themselves were actually much smaller than I thought they would be.

Unfortunately, we couldn't go in most of them. I was rather disappointed, because I remember there being a scene at the end of The Last Emperor where Emperor Pu Yi returns to the throne room, long after the rise of communism in China, and the scene transitions to a shot of tour groups passing through. We couldn't recreate that scene, though. The doors were open, but barricades were put up, so we could only look inside. 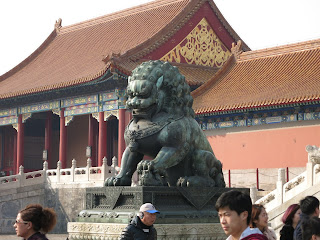 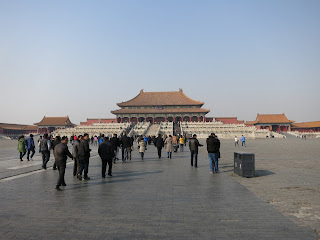 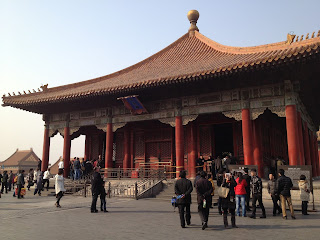 As you probably guessed, they also barricaded off the bas relief covered ramps between the stairs, so you can't recreate the scene from the movie where a toddler Pu Yi runs out into the courtyard either.

It's possible that they never let any tourists through the buildings, and that was just a scene shot for the movie, but it seemed that we visited during an ongoing renovation project. According to Chris, there was one undertaken before 2008, to get the palace spruced up in time for the Beijing Olympic Games. However, it was clear that this renovation wasn't complete. If you approached many of the buildings from the front, as most tourists would approach them from, much of the palace looks bright and restored. However, if you look at the rear of some buildings, or the ones less centrally located, you can see the cracked paint and chipped wood. It reminds you of just how old a structure this is.

According to Frommer's guidebook on China, there is a large scale, $75 million dollar renovation that is scheduled to be complete by 2020, which will be a more complete restoration of the palace, and also ad temperature controlled buildings that will be used to showcase hundreds of thousands of Ming and Qing Dynasty artifacts that are currently in storage. 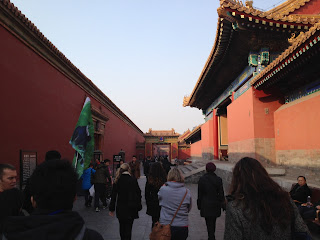 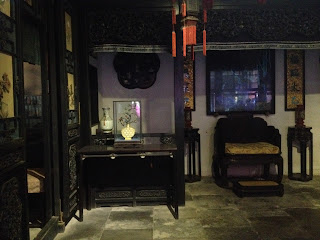 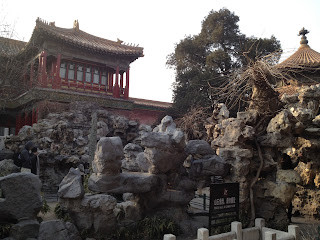 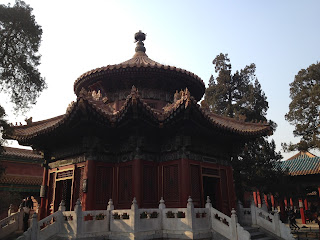 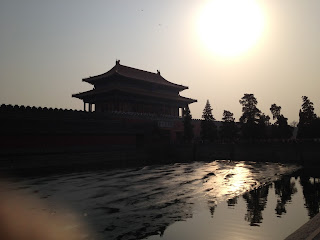 We exited to the North of the city, crossing over a moat. Ahead of us was a tree covered covered hill, topped with a pagoda. I later learned this was called Jingshan park, but unfortunately we didn't have time to go in and explore it. We would have plenty of gardens to see later on in the trip.

As we walked back to the bus, a vendor approached me selling a dragon statue. It was larger than the one I had picked up at the Great Wall, and his asking price was already cheaper than what I had paid for mine. I briefly considered buying it, but decided to pass. Partially, it was because our group was moving steadily ahead towards the bus and I didn't want to be the guy who was separated from everybody else on the first day, but also because I didn't want to set a precedent for myself of buying too many trinkets, then having to figure out how to get all of them back home.

Next: Peking Duck and karaoke

Posted by Allister Sears at 9:41 PM