Near the entrance to the Great Wall was a small market. Most of the vendors were just in the process of opening up their stalls when we were going in, but as we were leaving, they were pretty much all open. After all, what is any attraction without a gift shop of sorts at the exit? 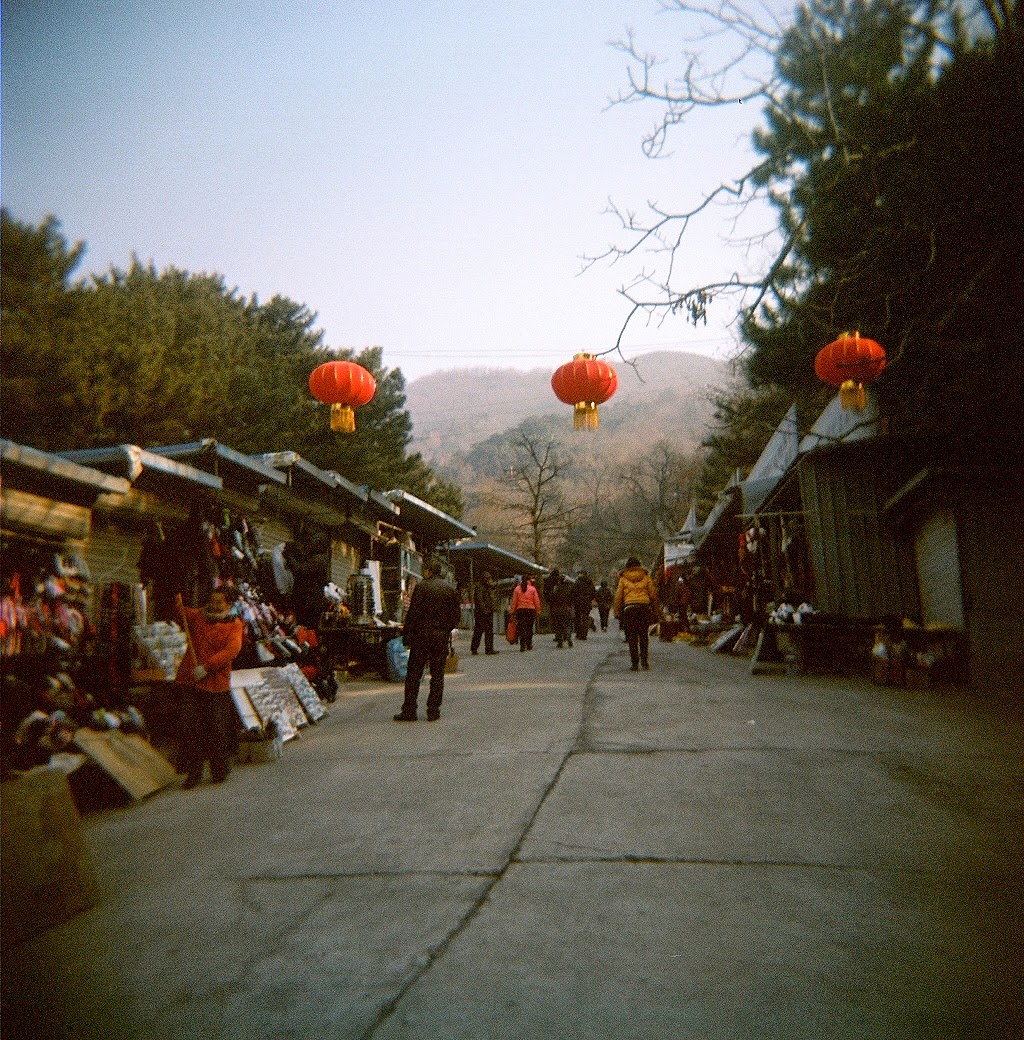 The assortment of items for sale was a bit odd. Aside from postcards and t-shirts, not much of it was themed around the Great Wall. I suppose this is understandable, as a giant wall, hundreds of miles long is not something that is easily represented in a snow globe, or as a miniature replica. So instead, most of the vendors sold cheap Chinese themed souveneirs, like plush pandas, plastic dragons or stuff like that. There were also lots of shirts with President Obama on them, some pro-Obama, some making fun of him, and some depicting him as Che Guevara. 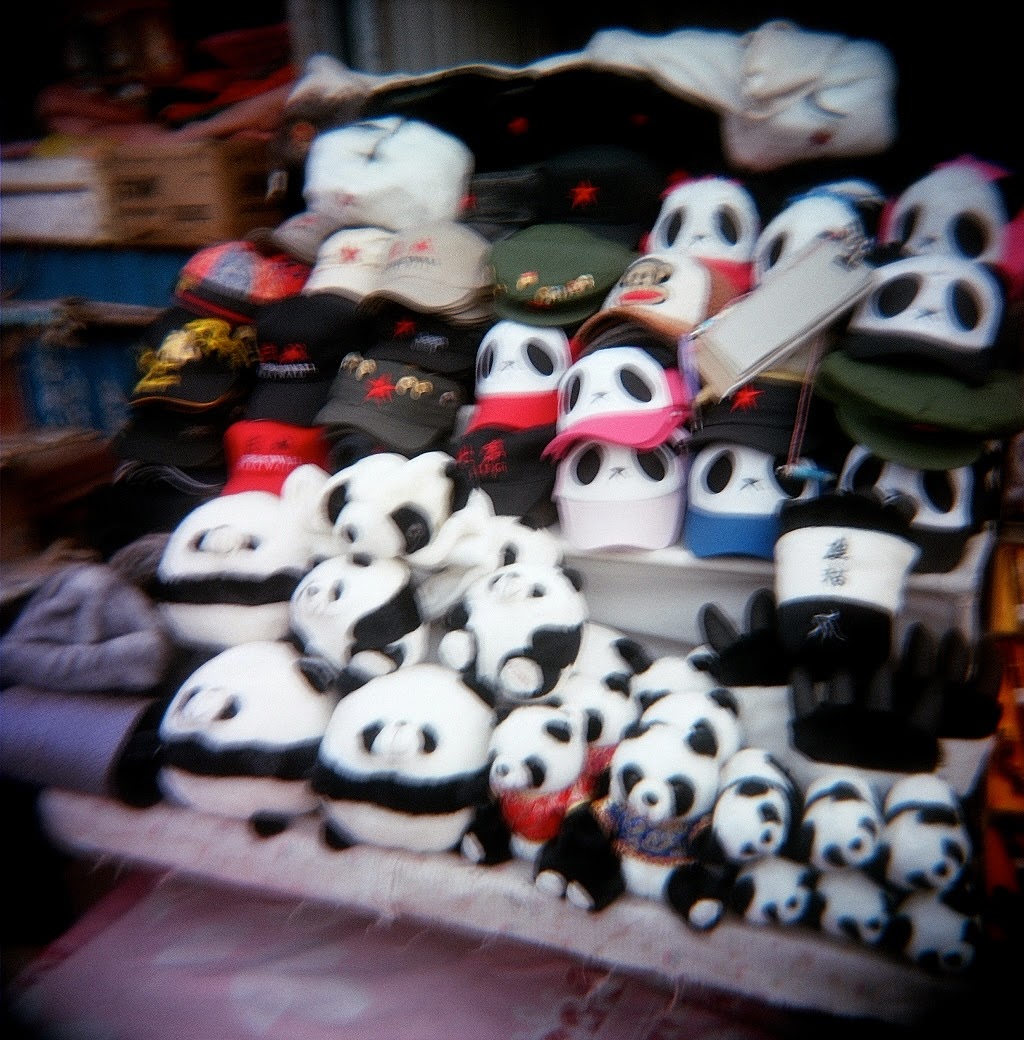 We had some time to peruse the market before we hopped back on the bus. Although I had taken plenty of photos on the Wall, it was ingrained in my head that if I'm going to visit a historic landmark, I should have something physical to bring back. A casualty of frequent traveling, I suppose. I saw a plastic dragon that I liked. It was made of a plastic resin designed to look like a hand carved wooden sculpture. In fact, when I picked it up, the vendor told me it was a hand carved wooden sculpture, but I didn't bother to call him out on it.

There wasn't a price tag on it, so I asked him the price. He wrote on a pad of paper that it was RMB 300. (RMB is a common abbreviation for the Chinese renminbi, the Chinese currency. RMB refers to the currency in general, but units of the currency are known as the yuan, so I may use the two terms interchangeably.) I did a quick conversion in my head. One American dollar equals about RMB 6, which meant he wanted about $50 for the statue.

I put it down immediately. It was a nice statue, but it certainly wasn't worth $50. I assumed that everybody at the market would charge high prices, hoping to gouge tourists, but that seemed a bit ridiculous. Before I could walk away, he handed me the pad of paper. I then realized he was expecting to barter. Good, so that meant he was fully aware that it was a ludicrous price he was asking. Also, I was rather impressed that they figured out an easy way to barter across language barriers. Considering that tourists come to visit the Great Wall from all over the world, I suppose it's inevitable that they'd figure out a universal way of bartering.

Only problem was, off the top of my head, I had no idea what the dragon realistically should be worth. It probably barely cost a dollar to make. In an American store, something like that would probably sell for about $5, maybe $10 if it was at a renaissance festival or something. At most, I could see paying $20 for it, under the weird "It's okay, I'm on vacation," most people adhere to when it comes to buying souvenirs.

I wrote down a price that came to around $10, and he did the whole routine of it being far too low, and asking for something around $40. I walked away, genuinely meaning to see what was at the other stalls, but of course walking away is just part of the haggling routine. He followed after me, paper pad in hand, offering a better price, but still not something I was willing to pay. At this point I spotted a portable chess set I liked, and stumbled into yet another part of the haggling routine: bundling. I ended up getting the chess set and the dragon together for about $15, and felt good about my bartering skills until the group reconvened and I realized that several other people had bought a similar chess set for about half of what I paid.

Apparently my friends' strategy for bartering was to offer a price that was as offensively low as the seller's price was offensively high.

I have no problem with haggling, but I realized that if I was going to have to do this for every cheap souvenir on the trip, it was going to get a bit tiresome,

We took a quick restroom break before heading on the bus. I'm only pointing this out, because this was the first moment it occurred to us that we'd be dealing with Asian toilets on this trip. There were still urinals, but instead of bowl toilets, they had squatter toilets. If you've never seen one before, it's the type of toilet that you have to squat down on the ground to use, as opposed to sitting on like a chair. I heard somewhere that squat toilets put your body in a more natural position for relieving oneself, but it seemed to pose certain difficulties, especially for one not accustomed to using this sort of toilet. 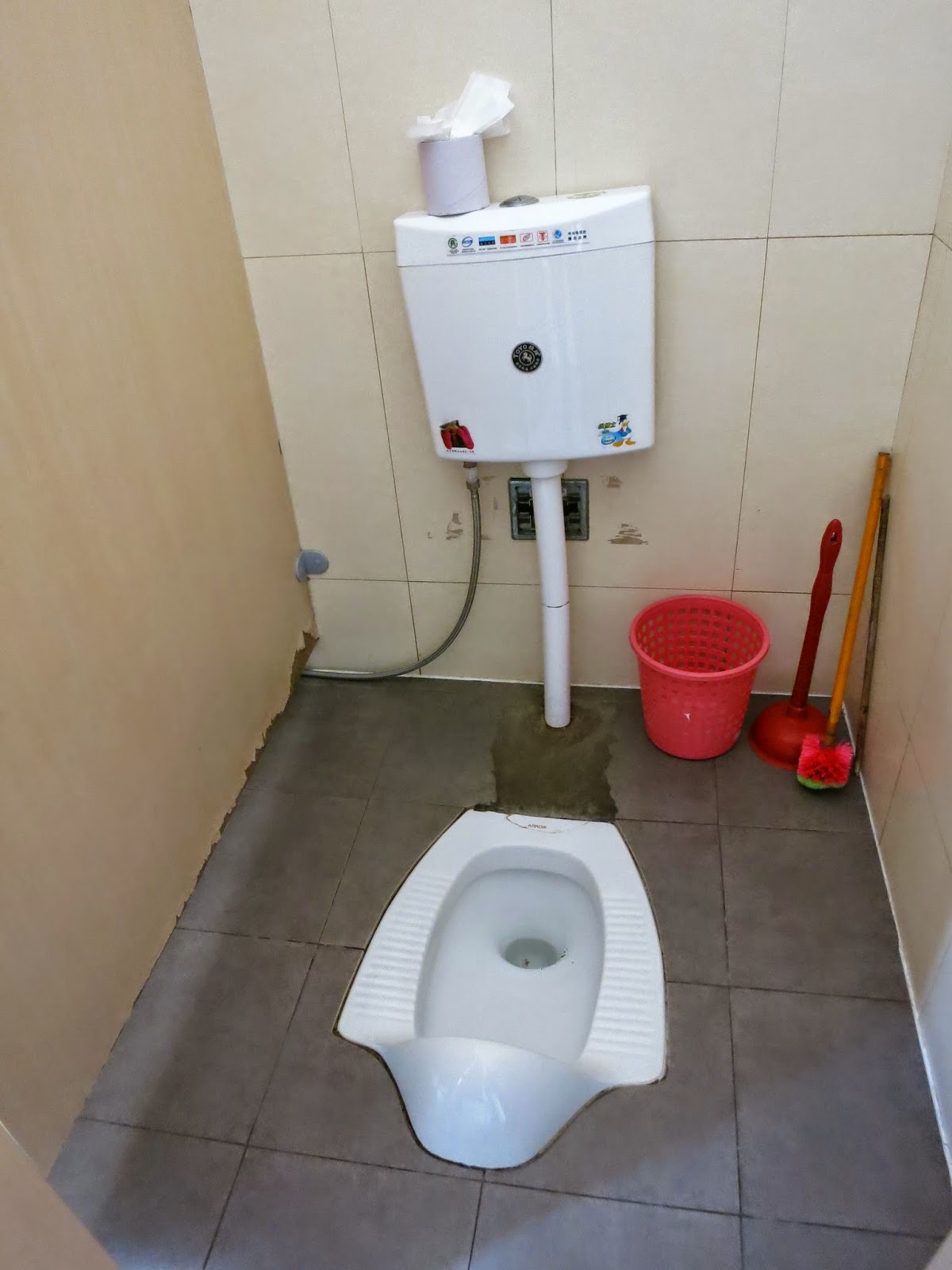 For one thing, note the position of the toilet paper, hastily stowed on top of the tank, instead of in some dispenser handily within reach of somebody using the bowl. From what I would later see on the trip, the toilet paper wouldn't always necessarily be in the stall. It might be by the paper towels, near the sinks, so you had to know ahead of time to bring it in. It also wasn't clear, from looking at the toilet, what was the best way of balancing one's self over the bowl that minimized splash back from below, yet still allowed you to retain your balance and not fall in. It also occurred to me that the women on this trip were also a bit surprised to see this greeting them when they opened the toilet stalls, except they actually had to use it, and would have to use similar toilets for most of the trip.

That detour aside, it was off to lunch. The bus drove us to a nearby restaurant called Xiao Long Pu.  Most of our meals had been arranged and paid for in advance, so all we had to do was show up at the restaurant and the food was ready to go. Plus we didn't have to sort out splitting the check twenty ways. 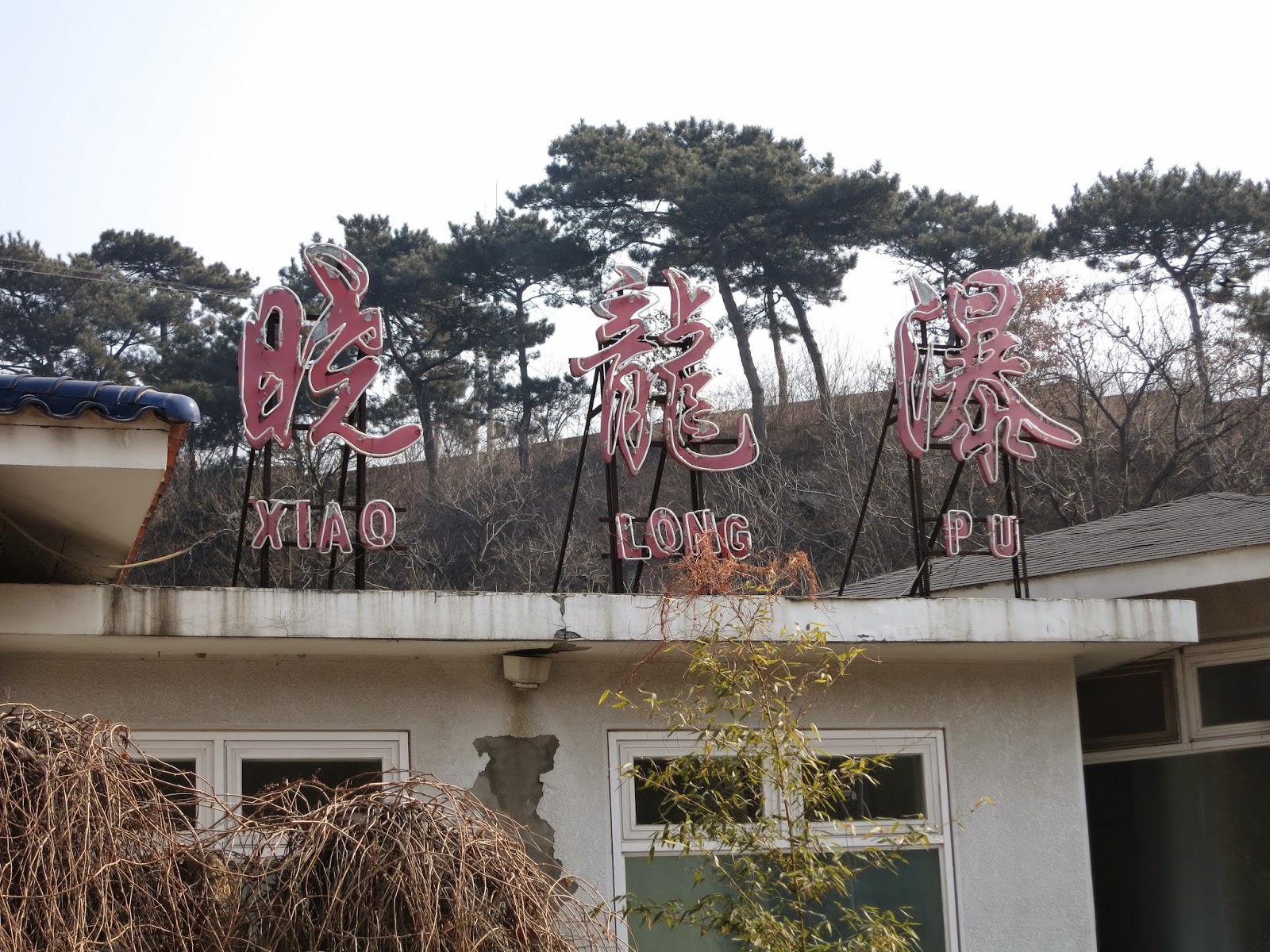 I had heard people say that authentic Chinese food is nothing like American Chinese food. A few of us were a bit worried by what this meant, as we didn't know if this meant dishes were made from strange parts of animals, or just that it was prepared differently. It turned out to be the latter. The story goes that when Chinese food was first introduced to the US, it failed miserably. Americans at the time weren't accustomed to trying out foreign, non-European cuisine. Chinese food only started to become popular in the US when restaurants prepared dishes in the saltier, fried, gooier versions we know today. 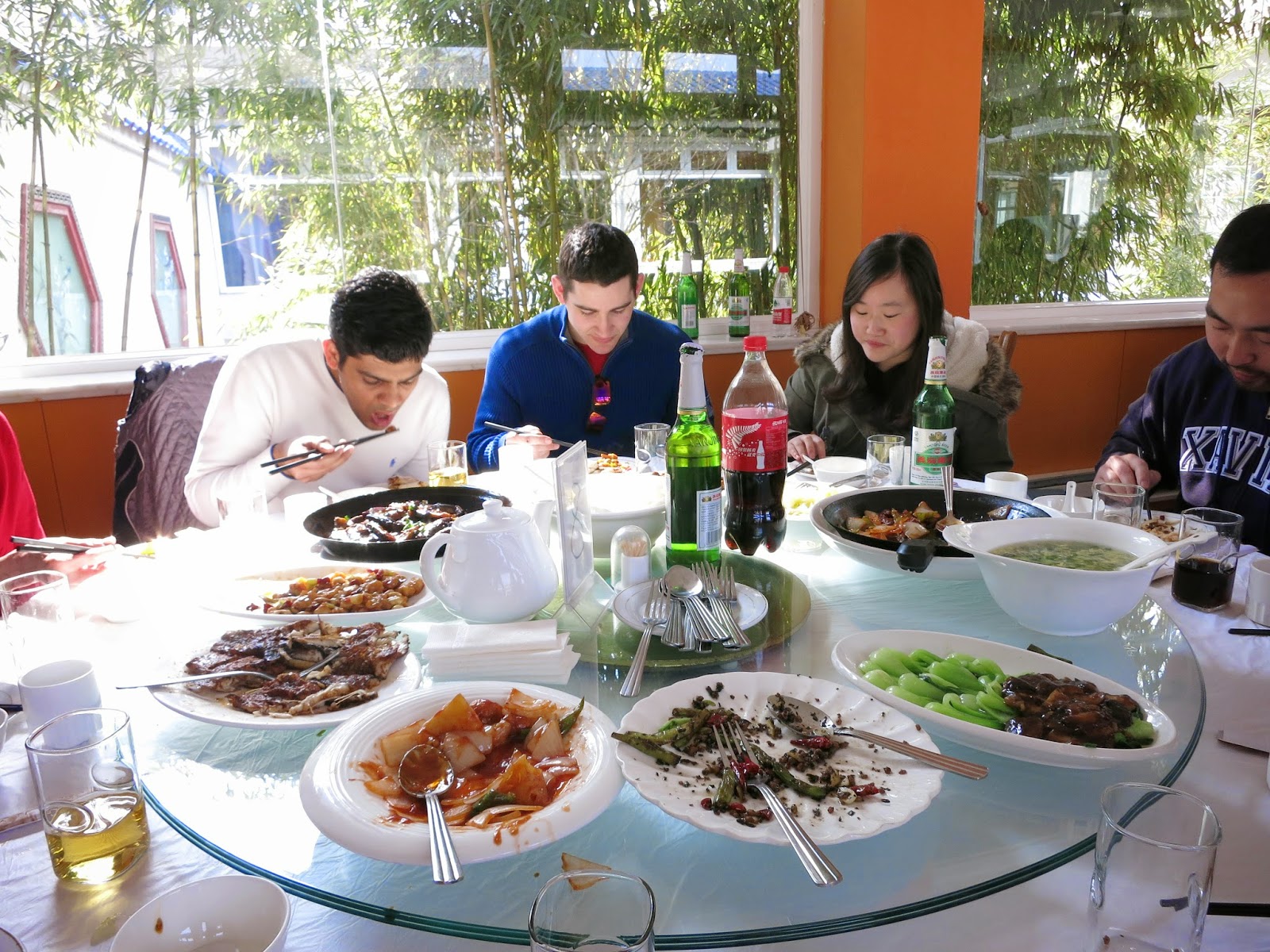 The group was broken up into two tables, each of which had our food placed on a glass Lazy Susan, so that you could just spin it around and take the dishes you wanted. Seeing the Lazy Susan made me immediately think of the nightclub scene from Indiana Jones and the Temple of Doom, where Lao Che tries to get Indy to give him back his diamonds in exchange for the antidote to the poison he just drank. I tried mentioning this to the group, but for a small, yet verbal, part of the group, the only scene from that movie that came to mind at all was the banquet scene in the Indian palace, and they politely asked me not to bring it up again.

The food we were served turned out to be much more familiar than I was expecting. There was wonton soup, kung pao chicken, and a variety of other recognizable dishes, albeit lighter and fresher tasting than their American counterparts. I'm not sure if our trip organizers decided to start us off with meals that were somewhat familiar to Americans to ease us into the culinary part of traveling, or if this region of China happened to have lots of dishes that proved to be popular in the US.

Before we left the restaurant a few of my classmates decided on a quick purchase. My group's project was on bringing bourbon to the Chinese liquor market. Thanks to one of my group partners, Steve, who was from China, we knew that the most popular liquor in China was something called baiju, a clear liquor often distilled from sorghum or rice. Aside from that, we didn't know much about it. However, the restaurant did have small flasks for sale,  so a few of us decided to buy some. Not everybody who bought a bottle of baiju was in my project group, so I appreciate my classmates on assisting me with my project to understand the local liquor market.

The intent was to save the baiju for dinner, or later, but we figured we might as well try it while we waited for everybody to pile onto the bus. The taste was something like a mix of sake and vodka, with a bit of a burn. After everybody who wanted a taste tried it, the bottle (we only opened one) was put away. We only wanted to get an idea what it tasted like, not have a wild afternoon of day drinking. The Forbidden City was next on our itinerary, and quite frankly I wanted to have a clear enough head to remember all of it.

Next: The Forbidden City
Posted by Allister Sears at 11:38 PM