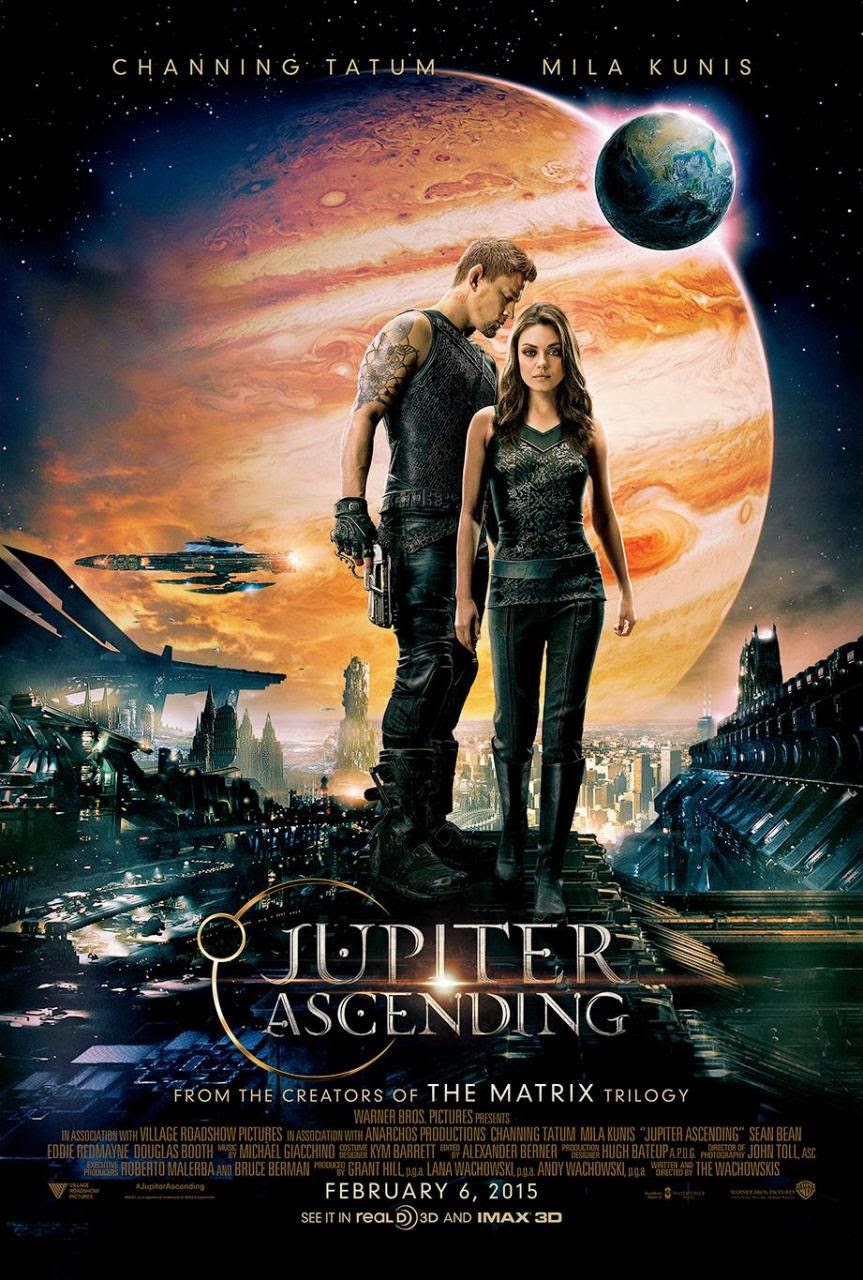 I hate having to say this, especially considering how much I like the Wachowskis' movies, but Jupiter Ascending was a bit of a mess of an action movie. It's an entertaining mess, but it's still a mess.

It suffers a problem that many sci-fi/fantasy movies suffer, where it tries to have a deep and complex mythology underlying the story, but the end result is something that's more complicated than complex. In Jupiter Ascending, there is a trio of siblings that own multitudes of planets. One of them owns Earth, which is apparently one of the most valuable planets, and his brother and sister want it for themselves. Except their mother has (sort of) been reincarnated on Earth as a cleaning lady named Jupiter Jones (played by Mila Kunis.) The Earth had previously belonged to Jupiter, (or her sort of previous incarnation,) and now it's hers again to claim. The siblings each decide to use various means to convince Jupiter to hand ownership of the Earth over to them.

This is a movie where politics play a central role, although it is more in the form of political infighting, as opposed to trade negotiations. On top of that there is a massive, unwieldy bureaucracy lurking in the background, full of rules and regulations about how transfer of ownership of planets goes about. It should come as no surprise that there's a Brazil inspired scene about obtaining the proper paperwork. Then there's also scores of rules an regulations in play about who can attack who, and when.

As if the underlying political system weren't enough to keep track of, there's also all the characters with shifting allegiances. As the film went on, I not only had trouble remembering who was double-crossing who, but also which characters were supposed to be allied with each other in the first place.

Jupiter Ascending's underlying issue is that the plot is severely underdeveloped. I get the sense that the Wachowskis had a rough vision for what they wanted this movie to be, full of spectacular battles and fantastic set pieces. The spectacle aspect of the film is fully realized, but the story never felt like it was more than an idea. Granted, it wasn't as bad as Transformers: Age of Extinction, a movie where I suspect the special effects scenes were created first, then the script was thrown together to accommodate the CGI. With Jupiter Ascending, it felt more like the script needed to go through many more drafts to be more workable. Buried in the film is the potential for a great story, but not enough time was spent enhancing the great moments, and shedding away the bad ones.

On the plus side, the Wachowskis' writing skills may have gotten a bit rusty, but they still know how to direct. I'm not saying anybody is going to win an Oscar for their performance in this movie, but if you were to watch scenes from the movie out of context, you might actually get the impression it was a solid movie. At any rate, there aren't any moments of overt badness from the actors, and it's actually quite fun seeing Eddie Redmayne revel in playing a pompous, aristocratic villain.

That's the thing, actually. I can't completely discount this movie because in spite of its many, many flaws, it is fun to watch. The moments that work, manage to work surprisingly well even against the bad parts. The humor lands on point, and not in a groanworthy, bad movie sort of way. There's plenty of genuinely funny moments in the film. The action scenes are exciting, from the arial battles along the Chicago river, to crazy fight sequences that have Channing Tatum flipping about on levitating boots.

Then there's the production design. This film has some of the most gorgeous and original set pieces and costumes I've seen in a while. Jupiter Ascending will probably be long forgotten by the Academy when next year's Oscars roll around, but the production design of this movie is something that awards should be given out for. It just makes for such a visually fun world, that you wish the story in the film lived up to the universe imagined for it.

Usually a film like Jupiter Ascending is the type you'd pass on in cinemas, but maybe get around to catching when it gets to home video. This would be such a film, if it weren't for the 3D effects. From their previous films, I suspected that the Wachowskis would take well to filming in 3D, as their visual style is already well suited to it. They use lots of steady camera shots and keep every part of a scene in focus. In fact, somebody watching Speed Racer for the first time might be shocked to realize that it was never released in 3D, despite all of its visual pop, and I don't think I'd object to a 20th anniversary 3D rerelease of The Matrix.

The 3D in Jupiter Ascending takes it from being an okay sci-fi movie to being a thrill ride. The Chicago River battle feels like a roller coaster. There's a wedding scene with overhead shots that actually induce a sense of vertigo. Finally, there's a fight near the end that takes place in a room with a translucent floor. In 2D, it would just be an alright shootout, but with the 3D effects, it feels absolutely immersive. You actually get the sense that you're in this impossible, futuristic space.

This might be the first time I've found myself advocating going to see a movie in cinemas just for the 3D aspect of it. It's not really a movie that's worth the price of a ticket, but perhaps paradoxically, if you are going to see it in a cinema, it's the sort of movie that you might as well go all-in for, and watch it on IMAX 3D. I can see Jupiter Ascending being one of those movies where clips from it are constantly being played on TVs at electronics stores as a way of showcasing how good a TV is. Stripped of a big screen and killer sound system, this film's weaknesses become far too apparent, but with all the bells and whistles in place, it's a reasonably enjoyable movie. It's unlikely that it will happen, but a part of me wouldn't mind seeing a sequel to this, provided they do a much, much, much better job of coming up with good story.
Posted by Allister Sears at 11:58 AM