In my mind the first two images that come to my mind when thinking of China are The Great Wall and The Forbidden City. Our tour itinerary had us visiting both on our first full day in China. This was a good call, as had we visited them later in the trip, I might have been too focused on visiting these iconic landmarks to truly enjoy everything else I was seeing. By getting them out of the way, right off the bat, I knew I could better appreciate everything else China had to offer.

We first grabbed breakfast at the hotel. The Traders Hotel was geared toward an international clientele, so there were plenty of American food options available, which is good because I rarely care to be adventurous with eating when it comes to breakfast. However, they did have a few non-intimidating Chinese breakfast options available, such as hard boiled eggs soaked in soy sauce and tea. The shells were cracked, but not broken, allowing the tea/soy sauce broth to work its way into the egg white, giving the eggs a marbled look when you opened them up. This was one of the first recipes I looked up when I made it back to the US.

Our bus picked us up in front of the hotel and drove us out of Beijing. We also had a tour guide joining us for the day, in addition to Kathy and Sophie. I can't remember the Western name he gave us, but it was something like Chris, (and unless somebody reminds me what his name was, I'm just going to refer to him as Chris for the rest of the story.) 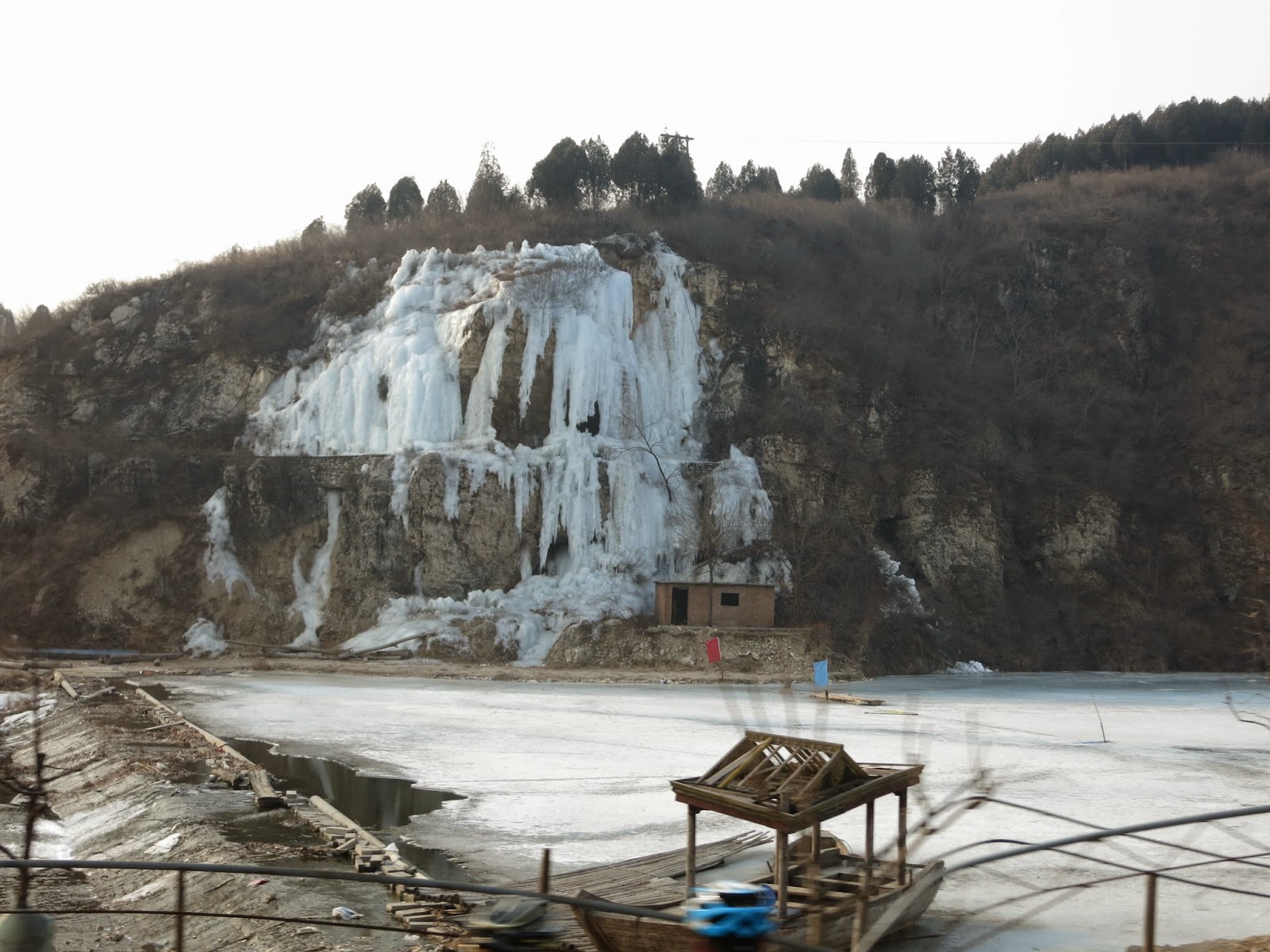 As we drove out of the city, Beijing's notorious pollution became quite obvious, as there was a noticeably light brown haze over the everything. Chris explained that part of the reason for Beijing's smog levels had to do with geography, as the mountains around the city trap much of the pollution in the area. However, there are projects in place to counter-act the pollution, such as policies that limit on which days cars can be driven. The government also is actively planting trees in the outskirts of the city to help clean the air, and the result was several groves of trees growing in a strangely military, grid-like formation. 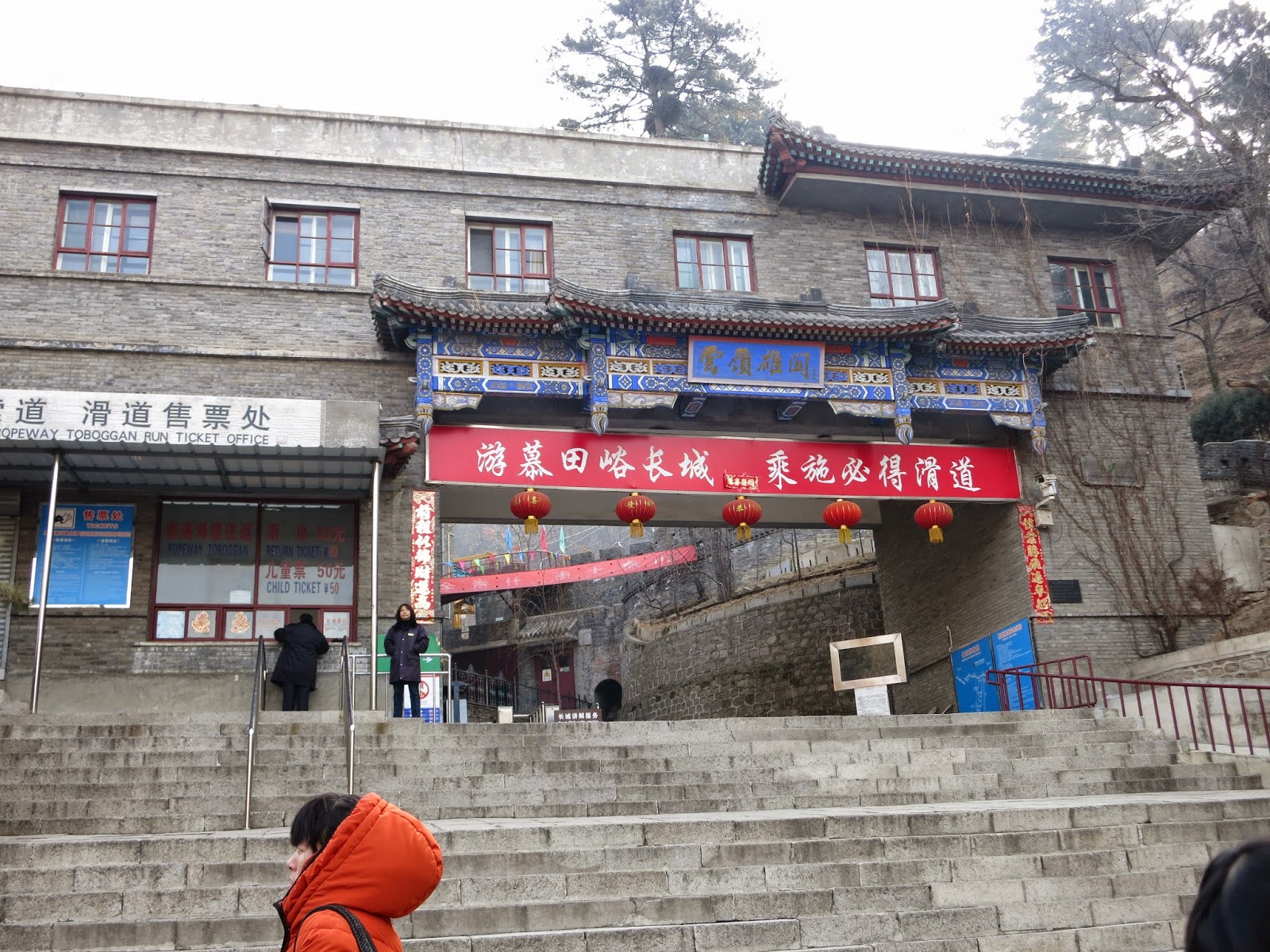 The Great Wall is not actually a single continuous wall, and many sections of it are actually lying in ruin, but there are several sections where it is open to the public. We visited the Mutianyu section, which had been restored in 1986. I've heard its an easy section to visit, as it is in good condition and less strenuous to hike about. However, it is also less popular, and thus less crowded than other sections. In fact, we didn't see many crowds there when we visited, but then again it was also a Sunday morning, so perhaps the crowds hadn't made their way down there yet. 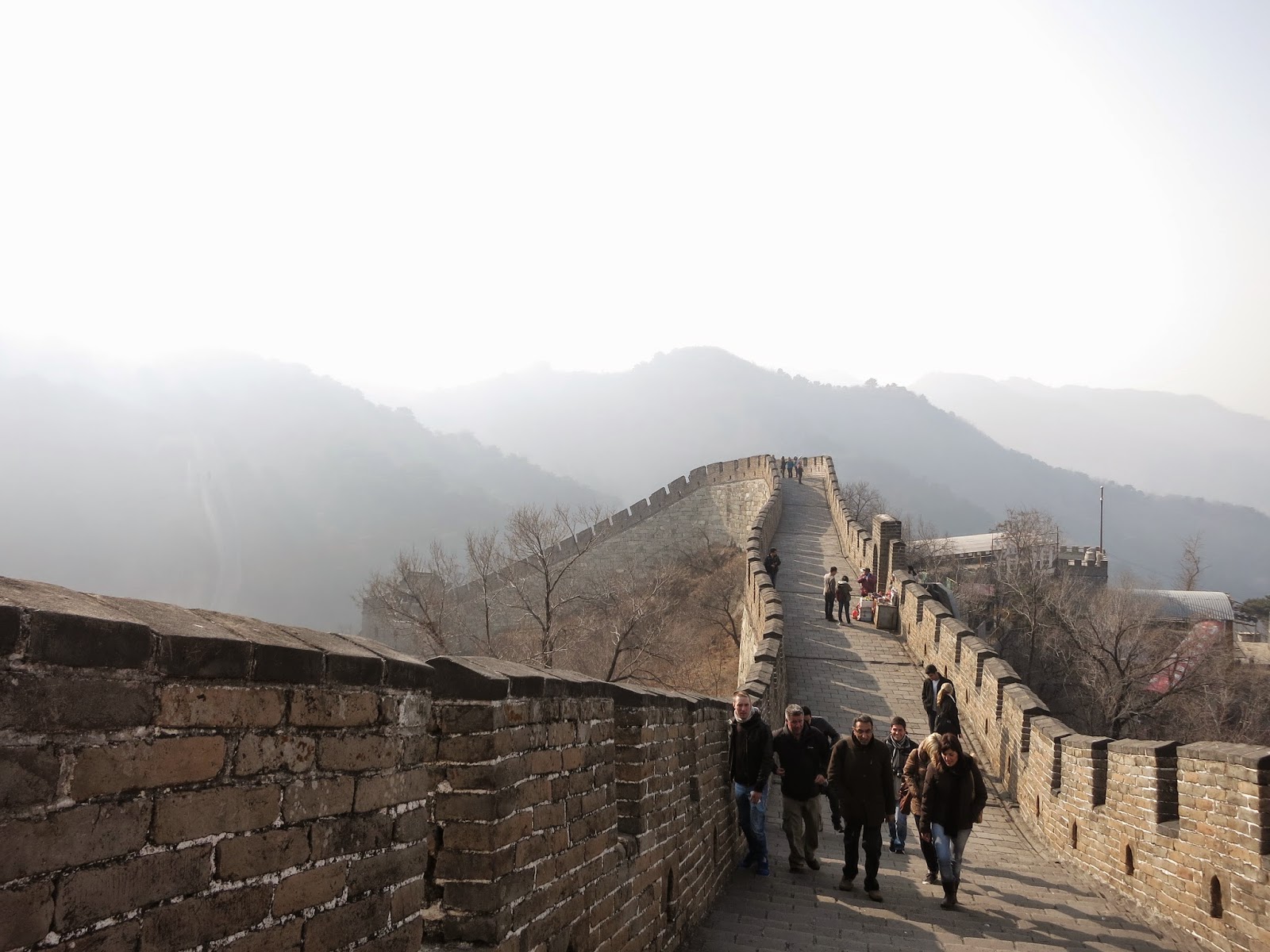 At this section, there were two options to reach the top of the wall. Take the stairs, or take a ski-lift. I believe everybody in the group opted to take the stairs. For one thing, the ski-lift cost extra. More importantly, after being cramped in a plane for a day, some exercise was more than welcome. However, there were far more stairs than I expected there to be. I don't know why I was surprised. It's very clear in every picture that the Wall is at the top of a mountain ridge.

On a side note, for a few years I had taken part in an event held every February called the Fight for Air Climb, a race to climb the 49 stories of the Carew Tower in Cincinnati. I opted not to do it that year, and quite frankly regretted it a bit, as training to climb a 49 story building would have made tackling the stairs to get to the Great Wall a bit easier.

Once at the top, the view was every bit as incredible as I hoped it would have been. From where we reached the Wall, it was easy to see the rest of the Wall snake up and down the mountain ridge, and below it were picturesque valleys. The smog was also considerably more noticeable than it was at ground level though. 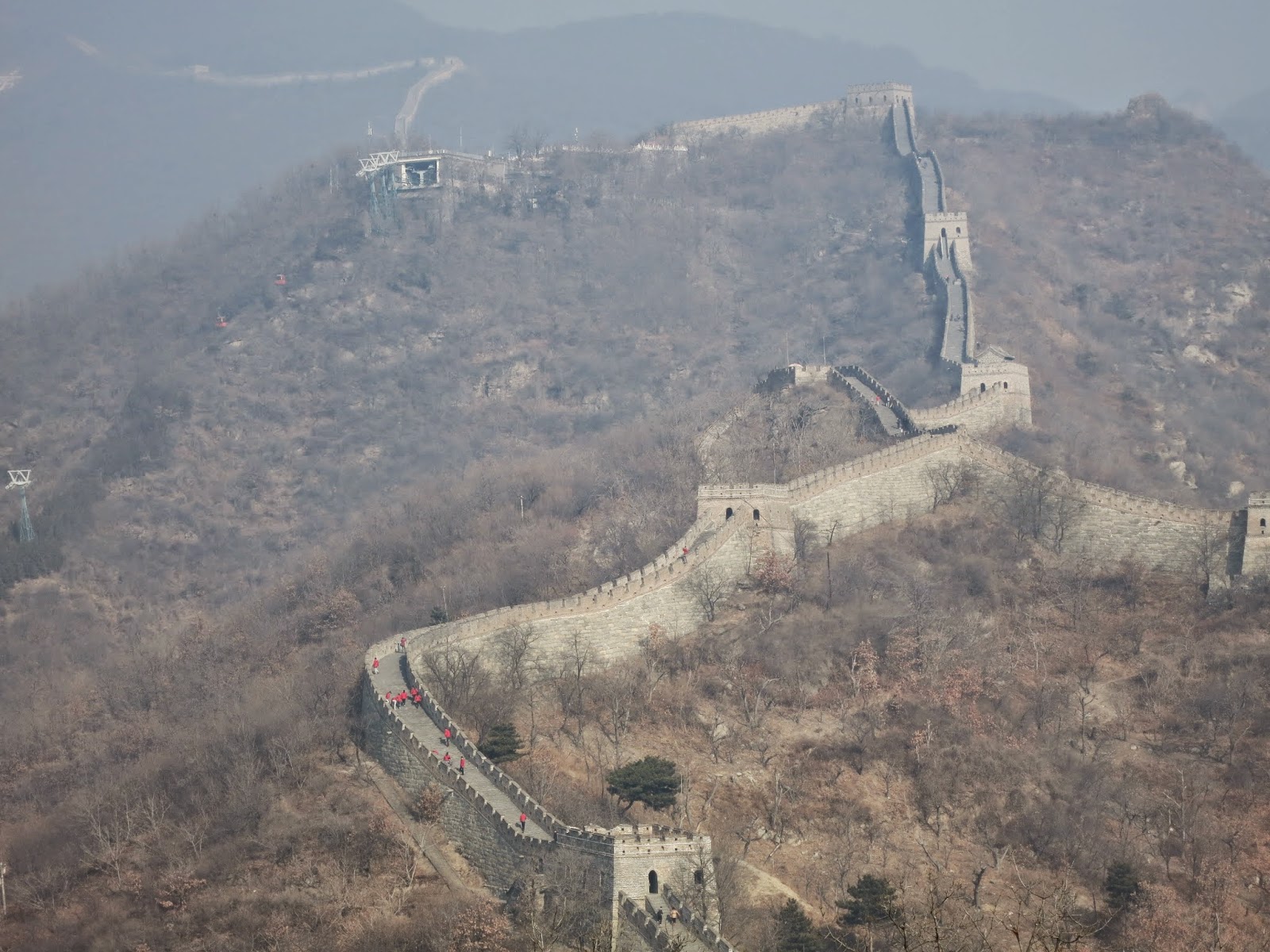 Positioned right near the point at which we entered the wall was a woman selling snacks and beer. Several people in the group immediately decided that this was the perfect time to crack open a cold one. Normally I'm not much on day-drinking, especially before lunch, but I had just travelled almost 7,000 miles and was now standing atop one of the Great Wonders of the World. That's a Tsingtao moment, if I ever knew of one. Also, I was still sort of on Cincinnati time,  and as far as my body was concerned it was still about 10 p.m., yesterday. Rest assured that the woman selling snacks was conscious about littering, and made sure to collect every one of our cans from us. 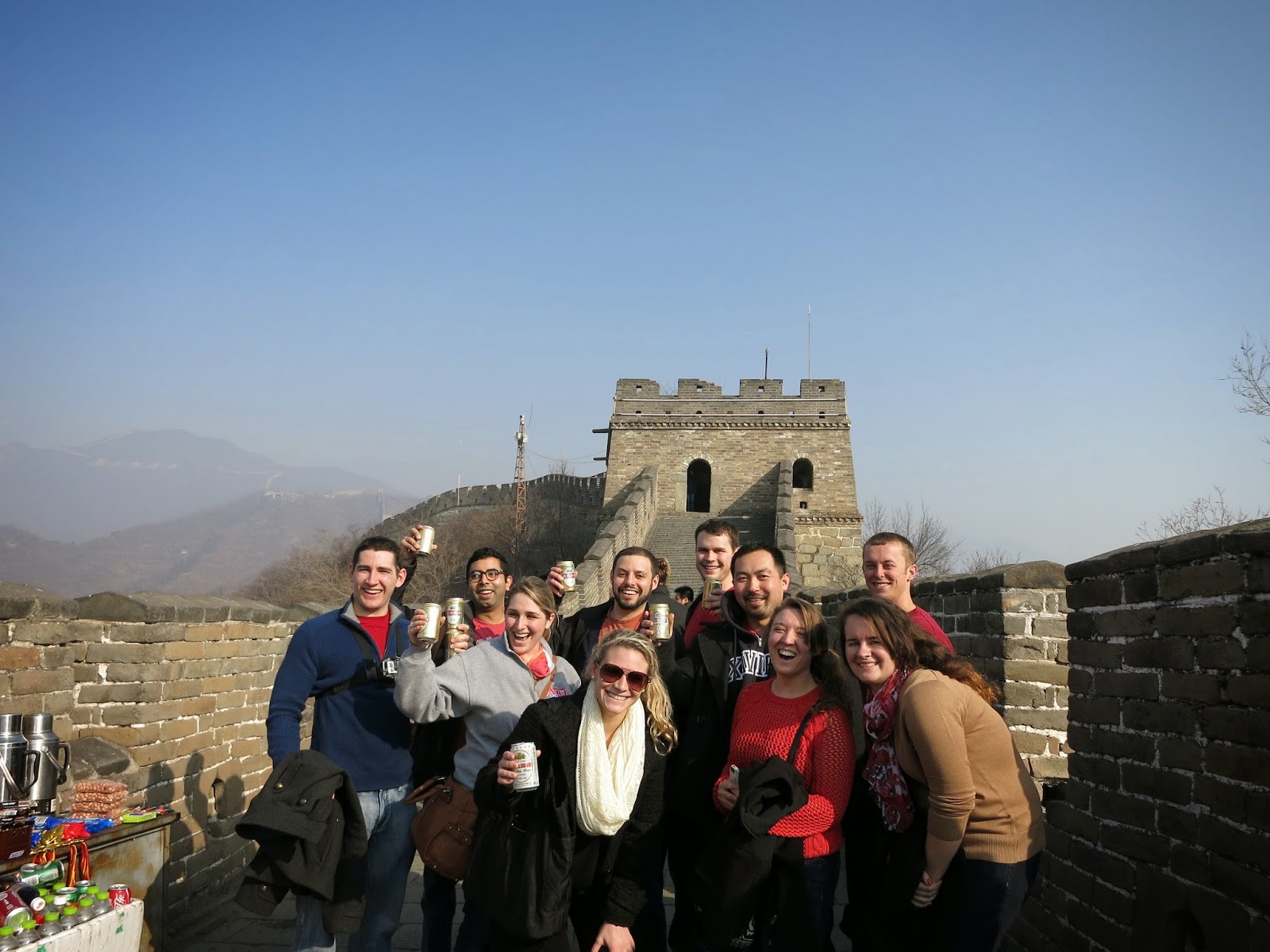 We walked along the wall to the nearest tower, and I was pleased to find that we could climb to the top of the tower, which offered an even better view of the surrounding area. It was also around this point that my classmates saw me using my Holga camera, a cheap (yet often over-priced) plastic camera, originally from China, that shoots on 120mm film. It gained a following among photographers for it's quirks such as leaking light onto the film, or producing blurry or vignetted images. In other words, its the inspiration for Instagram, and any other number of smartphone camera apps. Of course I had to give this history lesson to my classmates to explain why it is that I had brought what essentially looks like a toy to take photos with.

We all took the obligatory group pictures, and solo pictures, then continued to hike along to the other towers. Hike is the operative word here, as the wall matches the hilly terrain, and can get a bit steep at times. We only checked out one or two more towers, before making our way back. For one thing, we did have a schedule to keep that day, and couldn't spend all day along the wall. Also, it's a wall. You see one section of it, and you've pretty much got the gist of the rest of it. I'm sure that if we had continued along in either direction, we would have eventually reached the unrestored sections of the Wall, but alas, that will have to wait for another trip. 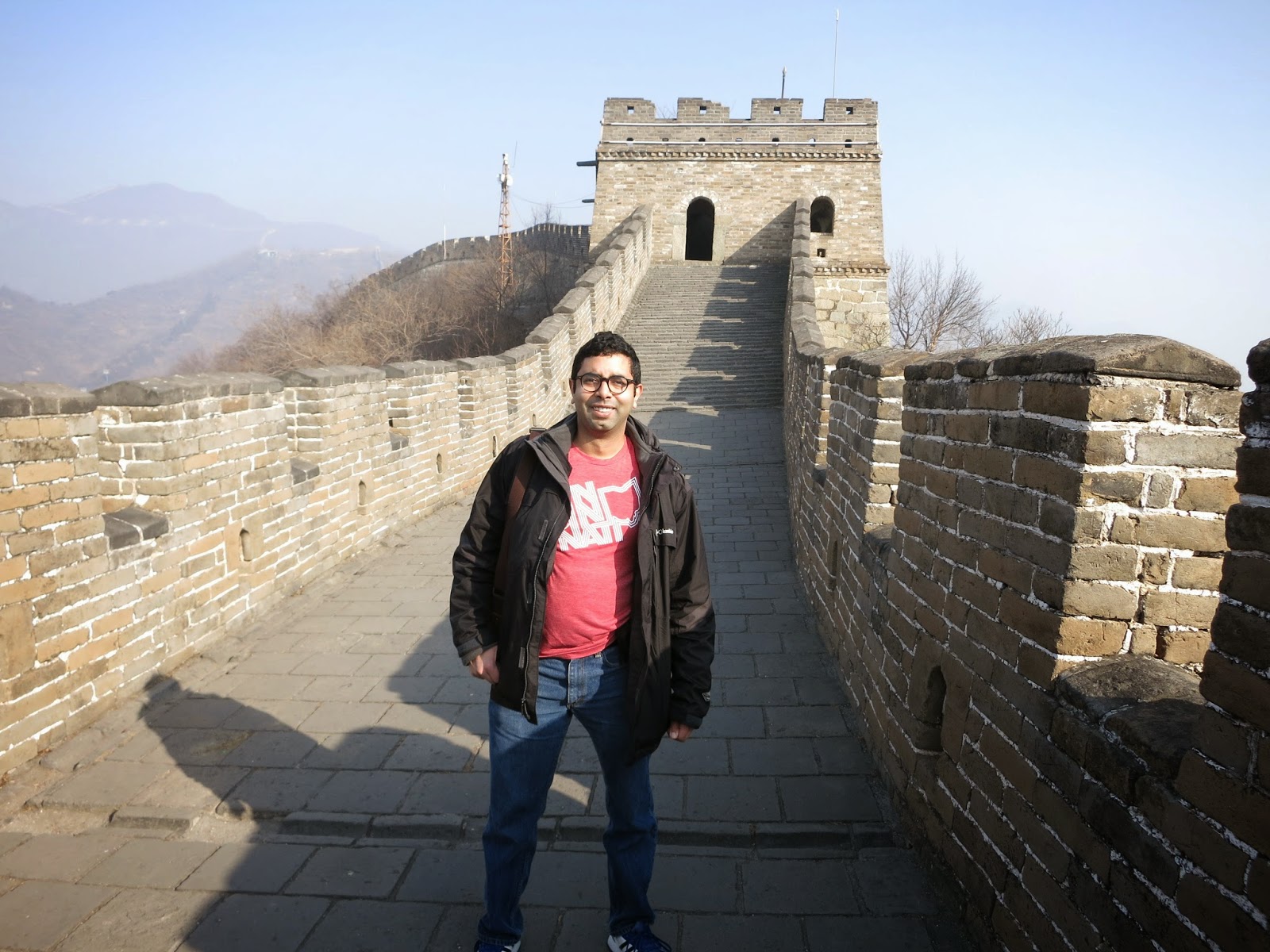 To get to the top of the wall, there were only two options, but to get down from the top, there are three. In addition to the stairs and the ski-lift, you can ride a toboggan back down to the bottom. The toboggan went down what was essentially a bobsled course, except made of metal, not ice. You get in the sled, and are given a quick tutorial on how to use the hand break, then you're sent down the hill. Most people in our group took the sled down, though quite frankly I can't imagine not wanting to ride it. It went reasonably fast, but there were people stationed on various points of the track to make sure riders weren't speeding dangerously. 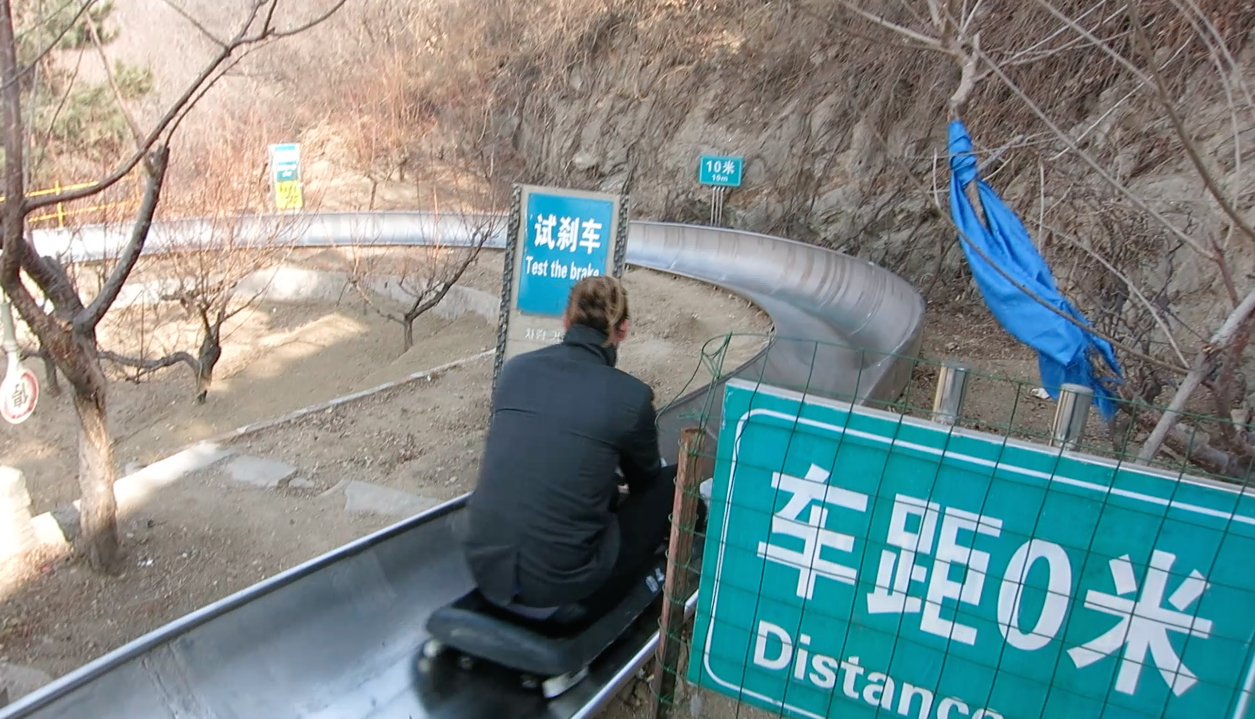 Some of my classmates were brave enough to film the experience their ride on either their cameras or cell phones. I, however, had just purchased a new camera for the trip, and wasn't too keen on losing it on a hillside on the first day of sightseeing, nor was I thrilled about the idea of not having both hands on the brake. We all regrouped at the bottom of the hill, and paid a visit to the little market that was set up near the entrance to the Great Wall.

Next up: The market, and our first group meal.
Posted by Allister Sears at 11:37 PM