Last year, around March, I had the opportunity to take a ten day trip to China as part of my MBA program at Xavier University. I had meant to write about it as soon as I came back home, but between work and school, it was a busy year. Now that I have a bit more time on my hands, it seems as good a time as any to tell you how it all went.

The trip was for a class called Doing Business in China. For the class, we were supposed to pick an industry and come up with a business proposal on an opportunity for an American company do expand into China, or for a Chinese business to expand in America. Aside from a few meetings before and after, the bulk of the class was the trip itself, and aside from the actual research on our chosen topic, there wasn't much in the way of reading assignments. We were supposed to read a book called Understanding China by John Bryan Starr, before we left for the trip, but I have the sense I might the only one in the class to do that.

My group ended up picking "Bringing Bourbon to the Chinese Market," because it was a topic everybody in the group felt they had something they could contribute to on the subject, and we were aware that bourbon, or whiskey in general, was only starting to make inroads in the Chinese liquor market. We specifically picked Buffalo Trace as the brand we would market, since it was an emerging brand that we figured hadn't yet made an aggressive expansion into China yet.

Although I was doing the trip through Xavier University, the trip itself was organized with a group called the Asia Institute, that among other things, organizes short term study trips such as the one we were taking. They worked with Xavier to come up with an itinerary that would give us a mix of cultural and corporate visits. Over the course of ten days, we would be visiting Beijing, Hangzhou, and Shanghai.

It was a group of 16 students going on the trip, plus two professors. When we took off from Cincinnati, a lot of us were only starting to get to know each other. I had a few classes with some of the other students, but most of them I only knew from the pre-trip class sessions. I suppose that's the downside of taking my MBA through evening classes. You have don't have as many chances to get to know people outside of class, since everybody essentially arrives at school just in time for class and leaves the moment it's over. However, we had a very long flight ahead of us, so we were going to have plenty of time to bond before we even made it to China.

The first leg of the trip was from Cincinnati to Chicago, then it was from Chicago straight to Beijing. The flight from Chicago to Beijing was about fourteen hours. In other words, that's roughly the amount of time from when you start your workday to when you go to bed at night. We flew on United Air, and they had on-demand video in every seat, so it definitely made the trip go faster, which meant I didn't have to resort to the books and podcasts I had stocked up on in anticipation of a long flight. I was able to catch up on a few movies I had missed in theatres, but I also checked out a few of the Asian TV shows that were available, particularly the game shows. Some had English subtitles or were dubbed, but some were neither. The good thing about Asian game shows is that you don't really need to speak the language to find them amusing.

We landed and made our way to customs. The customs officer I went to seemed to be somewhere between disinterested and hating her job, as the sour expression on her face suggested she wanted to be anywhere other than at her post right now. When she handed back my passport, a panel on my side of the counter lit up showing several smiley faces, running a range from sad to happy. The panel read, "Please rate my performance," and there was a button below each face. She did everything adequately, but I suppose she could have been happier about doing her job. However, as I decide whether or not to dock her any points for lack of a chipper attitude, the rating panel went dim again, and I don't think my vote went through.

They had us staying at the Trader's Hotel in Beijing. In the pre-trip meetings, our professor, Dr. Wu, had suggested that we weren't going to be staying in the center of the cities we were visiting, so that we could get to our cultural and company visits as quickly as possible without waiting in endless traffic. I was worried that he meant we were going to be staying way out in the suburbs, away from anything remotely exciting, but I think he just meant that we weren't going to be staying in each city's equivalent of Times Square. As we drove up to the hotel, I figured we had to be staying somewhere reasonably busy in Beijing, as the CCTV (Chinese Central Television) building was easily visible from the hotel. It's one of the more iconic modern buildings in China, with very distinctive geometric designs, with the upper floors making an angled bridge. However, some have suggested that at certain angles, it looks like a pair of pants. 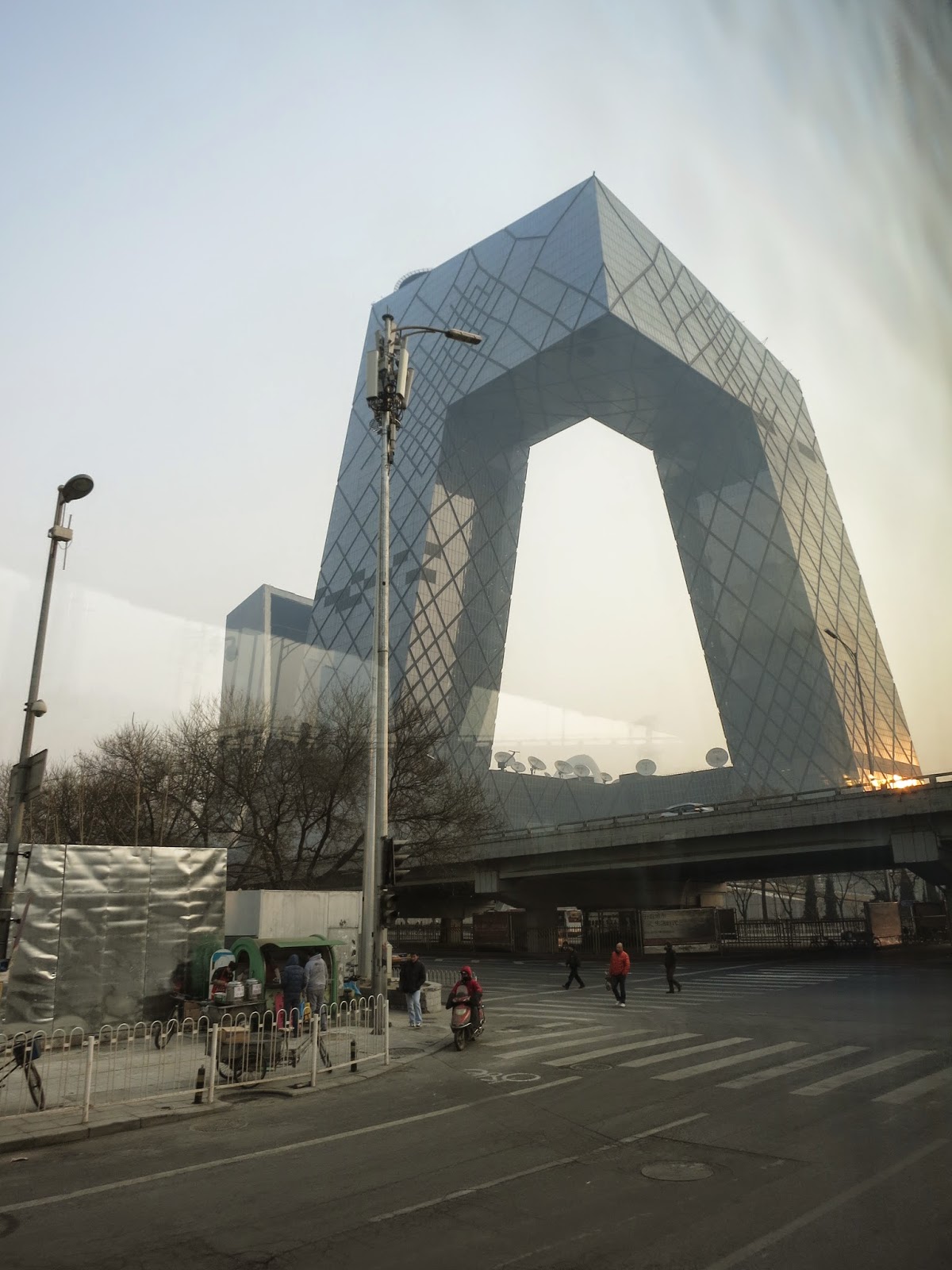 I know that China has long been associated with counterfeit goods, particularly knock-off purses, but the government has been making a strong effort to curb counterfeiting as China does increasing amounts of international business. However, that didn't stop the guy who saw us coming off the bus at the hotel, and immediately tried to sell us knockoff Louis Vuitton wallets.

We checked into the hotel. Everybody was paired with a roommate, and even though I didn't really know Josh, my roommate, before the trip, we had sat next to each other on the flight, and it seemed we were going to get along pretty well. I made the usual assessment of the hotel room. It was nice. Lower ceiling than I expected. No Gideon Bible, but there were a pair of emergency smoke inhalation hoods in case of fire.

Also there were three bottles of water. Two were complimentary, and one was the obligatory, tantalizing, but overpriced, bottle of Fiji water. The reason for the free water bottles was because tap water in China is not safe to drink. Not for you. Not for the locals. Not for anybody. Tap water is only safe to drink if boiled. Presumably the water was safe enough for showering and shaving with, but I decided that for the duration of the trip, I'd be better off using bottled water for brushing my teeth. Fortunately, the Asia Institute made sure that we had more than enough bottled water for the trip on all of our bus rides.

After getting a bit of time to settle in and shower, we all met back in the lobby. It was now effectively dinner time the day after we had left, so we were a bit eager to eat, but our program coordinators from the Asia Institute first had to give us some information on the area, and the trip in general. Their names were Kathy and Sophie. Those weren't their "real" names. It's a custom in many Asian countries to adopt a more "Western" name for interacting with non-Asians. They did tell us their actual Chinese names, but since I only heard them once, and their Western names were much easier to remember, for the life of me, I can't remember their Chinese names. Kathy was going to be with us for the whole trip, while Sophie was just going to be with us in Beijing.

They gave us an idea of what was in the immediate area, and more importantly that there was a mall attached to the hotel with plenty of restaurants in it. They also gave us cards with all of the necessary info we might need, such as their numbers, the Asia Institute's number Xavier University's number. The American Consulate, and so on. Then we were let loose in the mall.

We had hoped to find a food court, but instead we passed several stand-alone restaurants. There was also an Ed Hardy. I can't believe that got imported over there. Naturally, when in a group of 16, nobody could agree on which restaurant to go to. Rather than try to find one restaurant everybody wanted, we splintered off into smaller groups. We were going to have just about every meal together for the next few days anyway. No reason to try to coordinate getting 16 people into the same restaurant on the first night.

I ended up going to a Japanese noodle bar with two guys from our group named Nate and TJ, whereas most of the rest of the group opted for a Chinese restaurant next door. I figured we were going to have more than enough of our share of Chinese food on this trip, and it had been a while since I had Japanese noodles anyway.

By sheer coincidence, we had wound up at the same restaurants as Kathy and Sophie. We originally intended to let them enjoy their meal in peace. After all, they were going to be dealing with us all day for the next few days, but we soon found ourselves out of our depths, and needed their help. The restaurant did have English menus, but we found ourselves a bit stumped when it came to ordering. We each ordered a noodle bowl, but then there were more follow up questions we didn't understand.

Kathy explained that it was customary to order meals "family style" in China, where you order food for the table and everybody shares. So, even though a bowl of noodles struck me as a dish people wouldn't usually share, we had to clarify to the server that we each only wanted one bowl, and it was for each of us individually.

We also tried ordering beer, which Kathy also had to help us with because when we tried pointing at it on the menu, the response from the server was something lengthy we didn't understand.

"She said some Germans were here earlier and drank all of the beer," Kathy translated. I'm not sure if the server, or Kathy, meant that sarcastically, but it was evident that there was not going to be any beer at dinner.

After dinner, we made a brief trip to a food market in the mall to stock up on a few provisions, and some bottled water. (We didn't yet know there'd be plenty of it on the bus every day.) I had hoped to find some of the insane types of food you usually find in Asian grocery stores in the US, like shrimp flavored nachos, and what not. Alas, all I could find that was out of the ordinary was a can of Angry Birds soda. As a joke, I also picked up a surgical mask, which people tend to wear to protect against pollution. (Apparently a few students on the trip brought some in advance.) 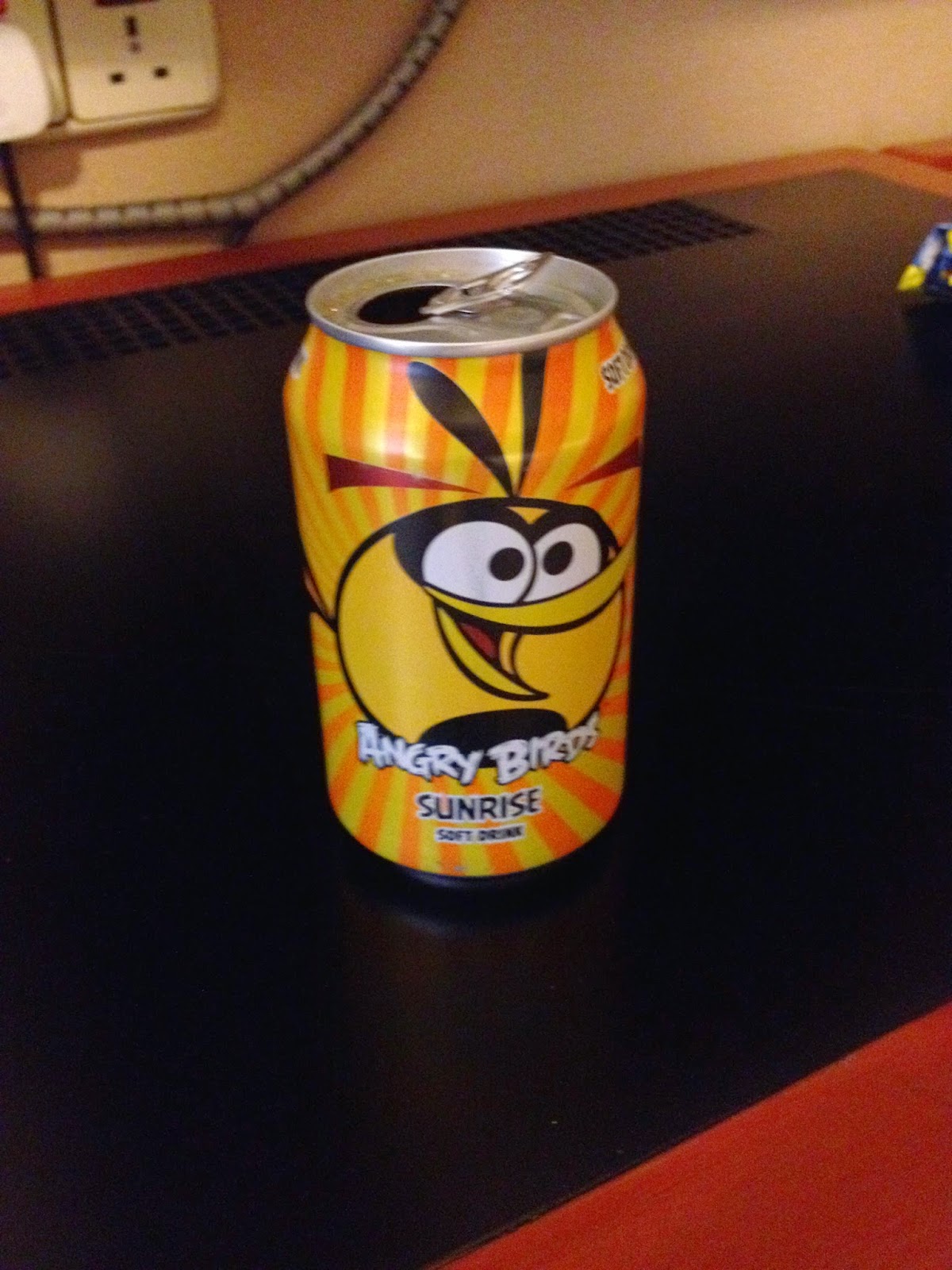 We did manage to snag some beers back at the hotel bar, and were able to order them without any issues. Some people in our group decided to wander around the area. As for me, I was tired from having lost an entire day by crossing the International Date Line, and from being in transit for almost a day. I was ready for bed.

Next: The Great Wall of China
Posted by Allister Sears at 8:09 PM