Dinner that night was back at the hotel, in one of the private dining rooms. As we were on the way in to our room, we passed by another dining room where there was clearly some kind of party going on in full swing. Kathy said she thought it might have been some kind of corporate party, but as we walked past, they were doing some sort of fashion show. They were playing their music at full volume, and we could hear it over in our dining room. At some point, we could hear them blaring the song "Du Hast," by Rammstein. Even if you don't speak German, that's a pretty hardcore song to play for a corporate party. 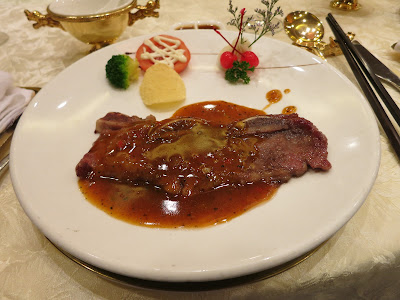 Joining us for dinner that evening was a local government official. I think she may have been some sort of regional governor but, I wasn't sure. There wasn't any sort of formal meet-and-greet, and as usual, due to the size of our group, we sat at two tables. She was seated at the other table, so dinner was a bit more relaxed at my table.

Later in the meal, Sara W came over to our table with a somewhat bizarre set of instructions. She told us that in a few moments, Kathy would come over and tell us about a bar/coffee shop that the governor thought we should check out, but that we should should say no to it. Sure enough, a few moments later, Kathy came over and told us about the bar the governor was recommending. However, immediately, she tried to downsell it, pointing out that it was about 20 minutes away. That seemed easy enough to politely turn down. Twenty minutes away is a rather off-putting distance when you're in a city that you haven't memorized the geography of, aren't familiar with the mass transit systems, and don't speak the language.

All of the complicated back and forth conversation made a lot more sense all of a sudden. Suffice to say, we did not decide to venture 20 minutes away so that one of us could maybe be set up with the coffee shop owner's daughter. 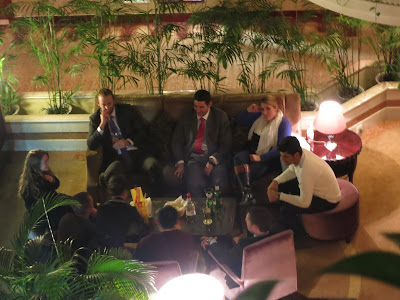 What we did end up doing was going to KTV, and this time everybody decided to come along, (except for our professors.) After a bit of downtime at the hotel bar after dinner, Kathy met up with us to show us the way to a karaoke bar she recommended. There was a small problem. All of us had assumed we were just going to the KTV bar across the street from the hotel, but she said there was a better one a few blocks up the road. To complicate things, some of the group lagged behind, saying they'd catch up with us, However, our phones only seemed to work on Wi-Fi, so we couldn't text those waiting behind to let them know where we were going.

Yes, we could have just waited for the whole group to meet in the lobby, but Kathy had clearly had a long day, and we didn't want her to stay out any later than she had to. So, I suggested that some of us go along with Kathy so we'd know where the place was, but then form a human breadcrumb trail with a person waiting behind at regular intervals, so the stragglers would be able to the find place. I'm not going to lie. I had that scene from Lord of the Rings in mind where they light the chain of torches along the mountaintop to send a message.

The plan worked. The stragglers found one of the group outside of the hotel who led the group further up the block until they met the next person in the group, and so on until everybody was at the KTV bar. It turned out that there was probably no way we'd have been able to message the location to the group even if text messaging was working on our phones. Despite the multiple KTV bars on the street with bright neon signs, Kathy led us to a place with much subtler signage, on the second floor of a building that was on a cross street.

We thanked Kathy for showing us the KTV bar, and told her we'd be fine from here, because she really did look exhausted, and Steve knew enough Chinese to get everything set up. As in the KTV bar back in Beijing, there was a store where we'd buy our drinks. Unlike in Beijing, I actually lingered around the store, and was surprised at just how big a selection there was. It was like a small convenience store, with various beers, energy drinks, snacks, and fairly decent liquor selection. I can't say it ever occurred to me to knock back a bottle of Johnnie Walker Black Label while singing karaoke with friends, but now it was an option. That being said, we just stuck with beer. 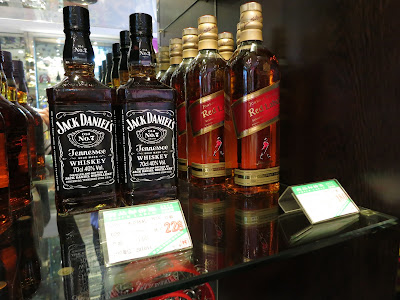 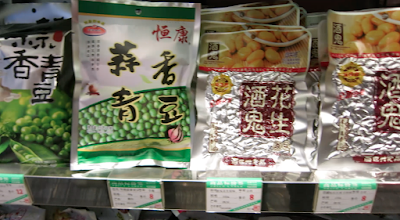 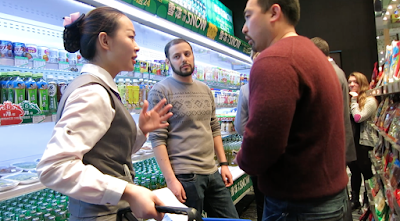 The karaoke machine in our private room was much easier to use than the one in Beijing, and we were able to set it up fairly easily. Like before, we just queued up a bunch of popular songs, and whoever wanted a go at the songs could grab a microphone. Even though only half of the group actually sang, it was one big dance party, and the it was first time we had really all cut loose and partied as a whole group. For those who didn't want to sing, they had tambourines and stuff so everybody could participate. 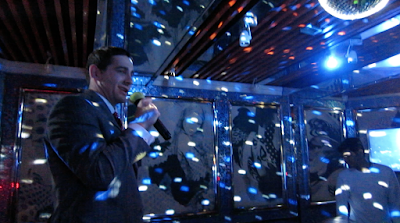 Next: More corporate visits, and the road to Shanghai
Posted by Allister Sears at 11:27 PM