After lunch at the conference center, (which was one of the fancier lunches we'd had so far,) we headed out to Alibaba Headquarters. We were familiar with the company partially because one of our groups chose it for their MBA project, but also because it was starting to make its presence increasingly known in the US, as its anticipated IPO lingered on the horizon.


From what I'd heard of Alibaba, it seemed to be China's own answer to many of the West's hottest startups. There was a bit of Amazon, Google, PayPal, and based on what they told us, even a bit of FedEx to their business plan. 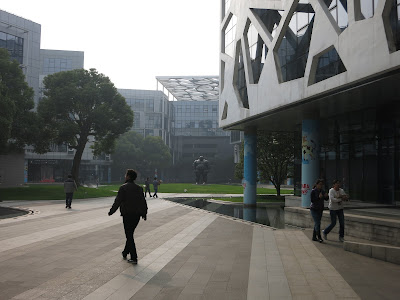 Their corporate campus embodied all of the wondrous things I'd heard about Silicon Valley offices. There were tons of luxuries on hand at the employees' disposal, such as game rooms, bookstores, grocery stores, gyms, and coffee shops. It looked like an employee could go from home to work and back again, be able to take care of their personal chores, have a bit of time to relax, but still get plenty of work done. 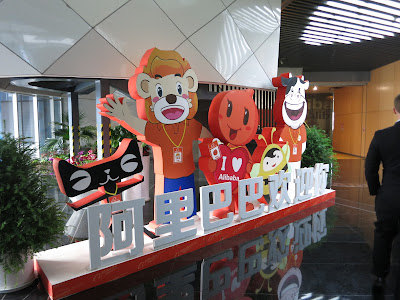 On top of that there was the architecture of the campus, which seemed to invoke a bit of the famous Bird's Nest stadium from the 2008 Beijing Olympics. There was a intricate webbing pattern that dominated the outside of many of the buildings, and pools that wove about the campus, along with some unusual choices in sculpture.


Eventually we were led into a room with a giant video wall showing various bits of company data, along with a map depicting the frequency with which Alibaba transactions were occurring across China. Naturally, the group that was doing Alibaba for their project devoured the presentation, but even the rest of us were thoroughly impressed. Clearly Alibaba was a company primed to take itself onto the international stage.


We hopped back on the bus and were taken to Xianghu Lake, another resort area similar to West Lake. As we drove towards Xianghu Lake, I noticed a bit of "duplitechture" off in the distance. Duplitechture is a term often used to describe when builders set out to recreate iconic landmark buildings. The podcast 99 Percent Invisible did a pretty good episode on the subject. While there are plenty of examples of the phenomena scattered throughout America, (my hometown of Cincinnati has it's own scale replica of the Eiffel Tower,) many have noticed that the trend has exploded in China in recent years, with towns modeled after Parisian streets (complete with their own Eiffel Tower,) or replica versions of the White House. Here, at the edge of one part of the lake was a replica of the Venice waterfront.


Our bus took us to a less developed part of the lake, one that was left in a more pristine state, and not surrounded by as many resort hotels. At the edge of this part of the lake was the Kuahuqiao Site Museum, the site of an archeological excavation that unearthed artifacts as old as 8000 years old. The building itself was made in the shape of a boat, in homage to the fact that the oldest known canoe (as in, "ever,") was found at the site. 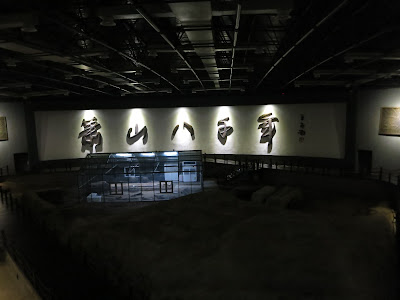 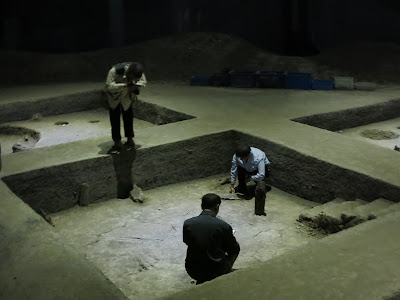 The main exhibit of the museum was a large hall, which I believe preserved the original excavation site. (I couldn't verify for sure, but as the hall was separate from the main structure, and most of the excavations took place between the 90's and the early 2000's, I doubt there would have been a need to recreate the site.) Among the archeological plots they put statues, to give a better context of what archaeologists were doing during their excavation. The rest of the museum was various artifacts recovered from the site. 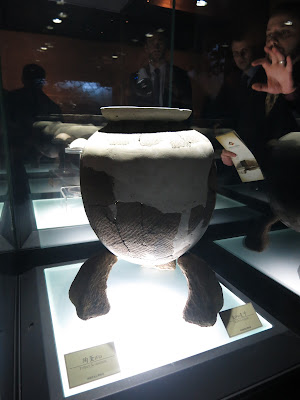 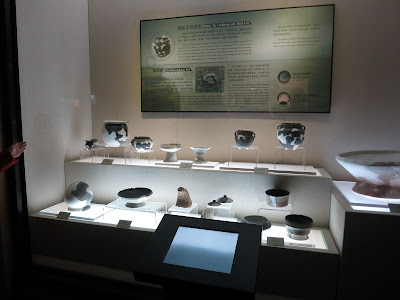 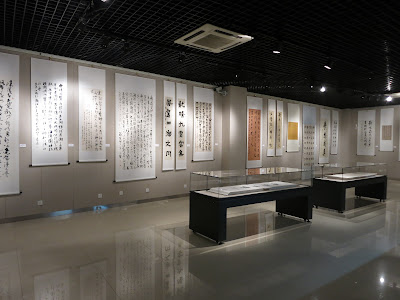 When we went outside, instead of getting back on the bus, we were led to a small boat. We were going to take ride out on the lake itself. I should mention that we were still in our suits. It seemed a bit strange to be doing the touristy stuff while still dressed for corporate visits, but it didn't make sense to change at the time. 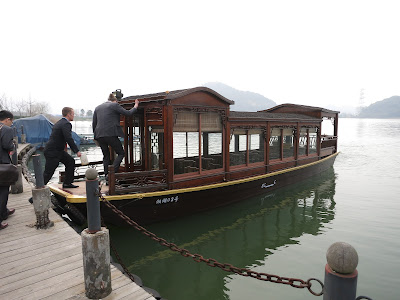 The ride out on the lake was nice. It was one of those moments you conjure up in a postcard image of China. A wooden boat out on a lake with hills off in the distance, as the sun sets. On top of that, there were little islands scattered through the lake, with ornate bridges and pagodas. It was a place I would have never figured out how to get to if I had planned this trip on my own. 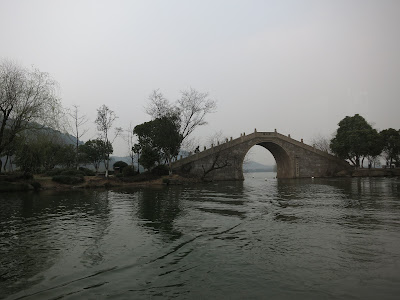 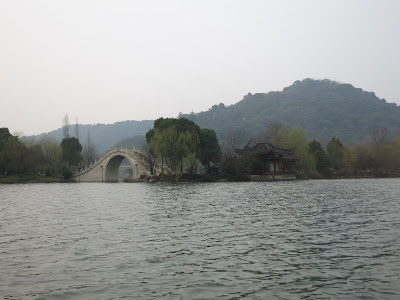 As the boat came back to the dock, I could see the back of the museum we were at earlier, and noticed that part of it was built out into the lake. I had a hunch that the part of the museum with the archeological site was under the lake, which would make sense. Again, I wasn't able to confirm this.

Next: Dinner and more karaoke