The morning had a bit of a strange start to it. One of Dr. Wu's associates was in charge of the development zone we were going to visit that day, but since his associate wouldn't be able to meet us at the park, it was arranged for him to meet us at the hotel for breakfast. A handful of us were randomly chosen for the breakfast, presumably due to the size limitations of the room we were eating in.

The idea of doing a formal breakfast was somewhat new to me. Breakfast is usually the time of day I'm still tying to put myself together. It is not normally a time that I don a suit and tie and meet high powered business executives before I've had my eggs and coffee.

We used the time with the executive to ask questions about the development zone, as well as gain some insight for our group projects. At some point we were asked to go around the table and introduce ourselves. As most of my classmates had well established careers, they were able to give lengthy descriptions of who they worked for and what they did for their company. Unfortunately, at that time I was somewhat unemployed, occasionally doing short-term legal document review projects.

I tried to explain to the executive that I worked with law firms to identify and prepare documents for upcoming litigation, and just to pad things up a bit, I also talked about how I had also worked in criminal defense law, and studied intellectual property in law school. I should point out that the executive didn't speak English, and Dr. Wu was translating for him. I can't say for sure, but as I talked for about a minute, but he translated for only a few seconds, I assume he just told the executive that I was a lawyer and moved on.

After breakfast, the entire group boarded the bus to the Hangzhou Lingjiang Hi-Tech Development Zone. I had initially assumed this was going to be some sort of industrial park: a few square miles of corporate offices amidst small scale factories. No, it turned out that they were building a new city. Officially, the area was called the Linjiang New City (at least in the investment brochure we were given.) 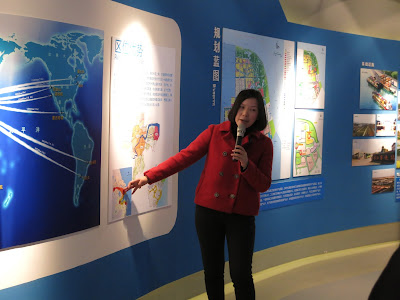 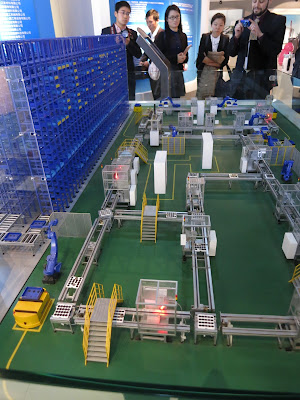 First we started at an info center, where we were shown videos, presentations, and models for what was in the zone, and planned expansions, as well as some various gizmos and devices that were being produced there. Then we visited a car company called Geely. No photos were allowed once we left the lobby, which was a shame because they really did have some cool concept cars on display, including a compact car that not only had an electric scooter that popped out of the center console, but also had a hatchback door that turned into a wheelchair ramp. They also showed a promo video that had been translated into unintelligible English, which sadly I have not been able to find online.

As nice as the building we were in, it did look noticeably empty. The lobby was spacious enough to fit a whole car dealership showroom, but had little in it besides the front desk, the concept cars, and the video wall. The upper floors were visible from the lobby, but still looked like they were under construction. Clearly, they had plans to expand at a rapid rate.

They did have a red carpet laid out, but they also left the sliding doors open, which surely must have been murder on their heating bill in the early March weather.

We were taken on a tour of the factory floor, and even were able to see the crash test track. Sadly, they were not doing any crash tests that day, while we hoped they might do one just for us, they pointed out that they were very expensive to conduct. I'm embarrassed to say that it was the first time I really thought about the cost of doing a crash test. At minimum, you're deliberately trying to trash a vehicle that costs anywhere between $10,000 to $60,000 or so, just to see exactly how its going to break, not to mention the cost of all of the equipment to monitor everything.

Yeah, they're definitely not going to do a crash test just to amuse a pack of twenty American students.

After Geely, we took the bus to a building that I assumed was some sort of conference center. Not only did they lay out the red carpet for us again, but they changed the LED sign in front to read "Warmly Welcome the Delegation of Dr. Wu to Linjiang." 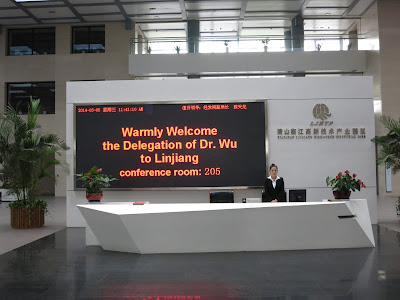 That made me feel extra fancy.

We were then led to a conference room that honestly made me feel like we were supposed to be negotiating international trade relations. We were each assigned a seat in a leather chair, some of them with microphones in front. At each seat was a finely laid out arrangement of a coffee, bottled water, a pen, an investment brochure about the Linjiang Industrial Park, and a name plate. On one side was our name written in English, and on the other side our name in Chinese. Or, according to Google translate, a reasonable approximation. 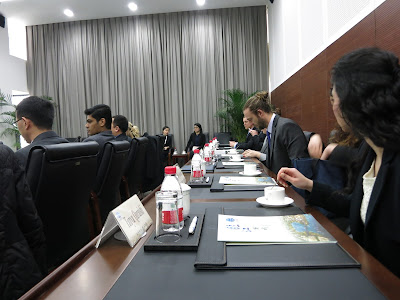 Here, we were given a much more thorough explanation of the development zone, and I really started to understand the scope of it. The plan for Linjiang wasn't just to build an industrial park, but to build an entire city. They outlined plans for full scale factories, high rises, apartments, schools, and even plans for a wetland reserve. It was, in essence, a city dedicated to advanced technology.

Next: Alibaba Headquarters and Xianghu Lake

Posted by Allister Sears at 9:59 PM