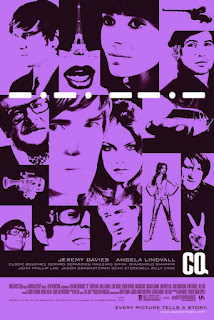 Roman Coppola may be the most underrated of all the Coppolas. There's a good chance you're familiar with his work, even if you don't know it. He co-wrote The Darjeeling Limited, and Moonrise Kingdom and was a second unit director on some of Wes Anderson's films. He directed the music video for Wyclef Jean's "We Trying to Stay Alive."He was also was the man behind the eerie and theatrical special effects in Bram Stoker's Dracula, which his father directed. Despite this, it seems he's still a bit  obscure, except to the most die hard film aficionados.

Back in 2001, Roman wrote and directed a film called CQ. So far it's been the only film he's directed, although he is currently working on another one. CQ is a story about an American filmmaker named Paul, who lives in France in 1969, and is working as an editor on a film called Dragonfly, a sort of Barbarella-inspired spy movie. At the same time, he's working on a side project of his own, recording every aspect of his day-to-day life. On the one hand, Paul's career advances as the producers of Dragonfly start going through directors. On the other hand, his relationship with his girlfriend starts to fall apart because of his obsession with documenting his life instead of filming it.

Leading the cast as Paul is actor Jeremy Davies, who you might recognize as Daniel Faraday from Lost. (Now that I think of it, he spends most of his time in both roles wearing the same black tie and white button down shirt.) He's perfect for the role, capturing the vibe of a man swept up in the free spirit vibe of the 60's but who hasn't lost himself in it. This is in contrast to the actors playing the other directors for the film within the film. Gerard Depardieu plays a director more concerned with making a political statement than making a film that's profitable, and Jason Schwartzman more or less plays his own interpretation of Andy Warhol.

I'm a bit disappointed that in the years since this was released we haven't seen more of Angela Lindvall,  who does double duty performing as Valentine, the leading lady of Dragonfly, as well as performing in character as the spy Dragonfly. As Valentine, she comes off as a warm hearted girl next door, but as Dragonfly she's an absolute sexbomb. It's impressive how she creates a character that feels completely natural when she's supposed to be off set, but when she's supposed to be playing the spy it almost makes you wish they made an actual feature film out of Dragonfly.

One of my favorite things about this film is the visual aspect of it. Not content to just set the movie in the 60's, Roman Coppola gives this film the look and feel of a movie made in the 60's. I don't mean some cheezy homage to 60's cinema either. If it weren't for the copyright notice, you might honestly think this was shot around the same time as The Pink Panther or the Sean Connery James Bond movies. He absolutely nails the color and lighting. Complimenting the visuals is a score by French psychedelic band Mellow, that again, feel perfect for the era.

Roman Coppola plays around with blurring the line between reality and fantasy. Sometimes we the audience will be shown a scene from the film within the film, presented as a fully edited and scored work, only for it to abruptly transition to the crew working on the film. Other times, the audience gets to go along with Paul's daydreams as he ponders what he wants to do with the film, letting characters from the film mix with his real life. It lends itself to the sort of wackiness one might expect based on Coppola's collaborations with Wes Anderson, if the wackiness of a Wes Anderson movie were somehow contained to one character.

As I mentioned before, Dragonfly, the film being made by the characters in CQ, feels like it should be a stand alone move. Even though you only see about fifteen minutes of footage from Dragonfly within CQ, it's so well thought out you get the sense that somebody in the 60's made such a movie from start to finish. Knowing this, the producers threw in two cuts of the film as bonus features on the DVD. One is supposed to be Paul's version of the film, the other is supposed to be Gerard Depardieu's character's version.

All in all, CQ is a worthwhile movie checking out if you're at all a fan of The Darjeeling Limited, the Coppola family in general, or just movies with that 1960's mod vibe to them.
Posted by Allister Sears at 10:05 PM