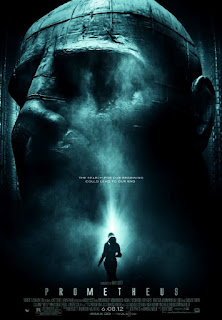 With Prometheus, director Ridley Scott did what I'm sure many directors have wanted to do after making an iconic horror movie who's impact was diluted by a slew of unnecessary sequels. He decided to reclaim his work. In 1979, Scott gave us Alien. While the sequel Aliens was comparable to the original, the franchise was marred by increasingly poor sequels, ultimately culminating in the Alien vs. Predator movies, which turned out to be far from as awesome as we all imagined they would be.

Prometheus isn't technically a prequel to Alien, but it is set within the same fictional universe, and does take place prior to the events of Alien. Rather then focus on the Xenomorph (what non-nerds would call the alien creature) it instead focuses more on Weyland Industries, the company that the crew of the ship in Alien worked for. In Prometheus, we learn more about the company's founder and the goals behind their space exploration as they chase after the possible origins of life on Earth.

The tone of this movie is considerably different from others in the Alien franchise. The others were straight-up horror movies, but Prometheus is more of a sci-fi drama with some intense horror elements. The story opens with a team of scientists who have found repeated evidence of a star map in drawings made by ancient civilizations. They are convinced that the planet shown through the map contains the secret of human creation. Of course, what they find on the planet turns out to be something dark and evil.

Much of the film focuses on the nature of what it means to be human. It's actually one of the few films I can think of that actually poses the question, "How can one believe in Christianity once they know aliens exist?" If it isn't the first to pose that question, at least it's one of the few I could think of that does so in a way not condescending towards religion or science. We see the nature of humanity questioned mainly through the eyes of David (Michael Fassbender) an android who is constantly reminded by his ship mates that he isn't human. But, as David points out to his human counterparts, they may find their creators as indifferent to their humanity as they are toward's David's. This is balanced against the religious convictions of Dr. Shaw (played by Noomi Rapace, star of the Swedish Girl With The Dragon Tattoo movies.) In spite of what she sees and what she gets put through, she still shows signs that she holds onto her faith.

The film isn't all philosophical debate, in fact that aspect takes a back burner once the action kicks up. As the mission (inevitably) starts to go wrong, we the audience are treated to some very intense scenes. There may not be any moment as iconic as the original Alien's chest busting scene, but there are moments that match it's level of white-knuckle intensity.

The core story about an ill fated space is well played out, and makes for a great movie on its own, but the subtle underlying philosophical element of the story is what makes it stand out from other space horror movies. My only gripe about Prometheus is that it raises deep philosophical questions, and implies there are answers to them, but it leaves them unresolved. Of course deep philosophical questions are part of the best works of science fiction, especially unanswered ones. Blade Runner also questions what it means to be human. Minority Report questions the line between intention and action.

Unfortunately Prometheus raises questions that it feels like there are concrete answers to. Worse than that, it implies they'll be answered in a possible sequel. Imagine if in 2001: A Space Odyssey, instead of leaving the monoliths as mysterious objects lurking in the background of great moments in human history, he implied there was an answer to what they were, but you'd have to wait until the sequel to find out.  If this style of storytelling feels familiar to you. it should come as no surprise then that this film was written by Lost co-creator Damon Lindelof.

That being said, Prometheus is certainly a landmark science fiction film. It draws upon elements from Alien and its sequels, but it's possibly the first movie I've seen that could be qualified as a prequel which manages to work as a stand alone movie, separate from the others. Considering how much buzz it's created on the internet since its release, you should probably see it soon, before other people spoil it for you.
Posted by Allister Sears at 12:10 AM