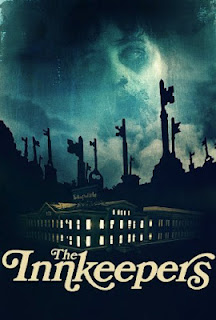 I've found that some of the best horror movies I've seen are ones that were made on a low budget. I think it's because when filmmakers accept the limitations of their budget, rather than crafting outlandish nightmares with complex mythologies, they're forced to make a story that's much more scaled back. Instead of relying on CGI monsters, they have to rely on playing up our own inherent fears. Fears of the dark. Fears of ghosts and supernatural phenomenon. Fears of being lost or trapped. All of these fears are put against the viewer to great effect in the film The Innkeepers.


The film was written and directed by Ti West, whose previous film, House of the Devil, seems to be a bit of a cult hit among horror enthusiasts. The Innkeepers is a fairly straightforward story. It's set at the Yankee Pedlar Inn, a hotel that's in it's last weekend of operation before going out of business. The owner is off on vacation, and the hotel staff is down to two employees, Claire and Luke, who are staying in the empty rooms for the closing weekend. With the hotel essentially deserted, they decide to investigate the ghost that supposedly haunts the hotel, and that Luke claims to have seen.

The filmmakers did such a good job of establishing the atmosphere in the movie that you owe it to yourself to meet them halfway. Kill all the lights. Watch it with as few people as possible. Watch it in a basement if you're daring enough. And absolutely, turn up the volume. The DVD actually plays a notice at the start of the movie saying that for full effect the volume should be played loud.

At first I just assumed that this was so that they could surprise you with things popping out at unexpected moments. To some degree that is what happens, but it's mainly to make sure you hear the barely audible noises in the film. Several key scenes involve Claire wandering around empty rooms with a tape recorder trying to pick up sounds of ghosts. At first she just hears static, but it slowly gives way to coherent and unnerving sounds.

The ghosts in this movie are kept pretty simple, which makes them not only frightening, but downright believable. If you've ever found yourself in a situation where you're hesitant to enter a dark room in an empty building, because something in the back of your mind is worried there might be something unnatural in there, even though you don't really believe in ghosts, this movie will prey on your fears. When the ghosts do manifest themselves, what happens is probably what you're afraid will happen to you when you're in that dark and empty room.

Some parts of the story are predictable, but Ti West takes what's familiar and makes them feel like elements that belong in every classic ghost story. It just conveniently happens that one of the few guests at the hotel is a spiritual medium, but from a storytelling point of view, she's put to good use by establishing the potential dangers of the hotel's ghosts. Likewise, when an old man shows up at the hotel, insistent on checking into a specific room, you know that something bad is going to come out of it, but there's still that sense of dread you'll get while you wait for the inevitable scene to happen.

In fact, building a sense of dread is what the horror aspect of this movie revolves around. It provides little bits and pieces here and there to make you feel unnerved. Things like faint noises and a building full of empty rooms. At the same time, the scenes between Luke and Claire enjoying themselves in the empty hotel provide you with enough of a sense of security that you are willing to accept why two people would stay in a hotel if they think it's haunted. When the dread starts to build to its fever pitch, you really notice the loss of that sense of security. This film has one of the best deliveries of the line, "She's right behind you," that I've seen in a while.

It's also worth noting that the Yankee Pedlar Inn is actually a real hotel. Unlike it's depiction in the film, it's currently still in business, and they proudly let visitors know on its website that it was used as the filming location for The Innkeepers. It might not seem like the wisest of marketing strategies, but then again the Stanley Hotel  also proudly lets visitors know it was the inspiration for Stephen King's novel, The Shining and the filming location for the mini-series adaptation. They even show Stanley Kubrick's version (which was not filmed there) on a continuous loop on channel 42.

Getting back to The Innkeepers, it's a nice compact story that doesn't waste time stretching its premise out any longer than is necessary. It probably isn't all that scary a film if you watch it in broad daylight, but if you watch it the way it's meant to be watched, you'll find it has all the kick of a good campfire story.
Posted by Allister Sears at 10:59 PM